It’s the first day of final rehearsals for Steve Vai’s “Story of Light” tour.  Our first set of rehearsals was last June, and since then I’ve been at home practicing on my own.

We’re now all back in California, in a large new rehearsal space outside of L.A. which feels like a black-box theater, except the walls are brick, and so new that brick dust is drifting down onto the harp cases.

I get lost, despite my GPS and two Mapquest maps and when I finally arrive, the crew is madly testing equipment. I’m amazed as how gracious Dave, the monitor engineer is when I ask questions – I realize this moment is a huge crunch for them.  They’ve been here since last night setting up equipment and sound. 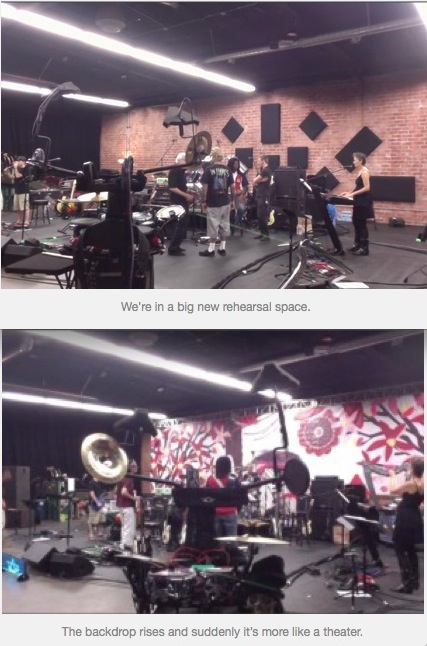 Once we’re set up, we sound check each instrument, and then Steve arrives.  He’s just flown in yesterday from Moscow, along with Dave Wiener (guitar), Philip Bynoe (bass) and Thomas Nordegg (Steve’s tech genie) so they’re all jetlagged.  I’m pretty sure I am too, but since I only flew through 3 timezones yesterday, I hardly feel I have a claim to it, compared to them.

We start from the top of the program and work our way down, spending a couple hours on each tune, with the plan to get to about a 3rd of the tunes each day, working from around noon ‘til 9:30 or so at night.  Some of the tunes are still a challenge for me, despite weeks of working on the music – because of the sheer volume of new music and new techniques I’m using.  But today there are also moments where I can fit my part in with the others, and start to feel like I belong here musically.

As we rehearse, men arrive with framing, lights and a backdrop – and little by little the empty room becomes more like a stage.

My big goal for the day is to try to convince Steve to let me play “Tender Surrender” on harp instead of keyboard.  The accompaniment is standardly played on organ, but I discovered, during my last six weeks of practice, that with a constant foot tremor on the wa-wa pedal, you can get an electric harp to sound almost like a Hammond B3 organ.

I keep thinking what a revelation it would be for Steve’s fans to hear a tune they’ve known for years, but with this slight twist – a visit to that territory between familiar and different, that lets you see something you already love in a new light.  I love that I could do that … if he’ll let me … and he does!!! Wahooooo!

Now, back at the hotel, I’m torn between hunger to practice and desperation to sleep … and then head back for Day 2.