It’s 1:30 AM I just got back to the hotel.  Rehearsal ended around 12:45, then I stopped at a 24-hour Ralphs and bought more food than will fit in my fridge … but that’s not because I bought a lot of food. 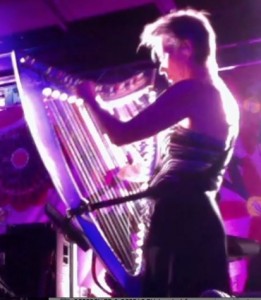 El Deborita prepares for the Bulba

I’ve been at the rehearsal hall since 11AM.  We went through the rest of the show, and then did a run-through.

The most fun part of the day was playing “Taras Bulba” which has one of the show’s most challenging passages for me, one I rewrote probably 7 or 8 times before I got the final version, and which I remember the starting levers I need to change via this story:

The Bulba has arrived via grand procession, but he reaches the house of El Deborita she yells, “Bull-Feathers!” – or rather, she would yell that but in the middle she realizes it might not have been such a good idea.  So, while the word “Bull” has a strong downward inflection, the word “Feathers” turns sharply up into a question.  All of which means: “lower the B (for “Bull”) and raise the next F (for “Feathers”).

But alas, it’s too late, the Bulba has heard El Deborita’s thoughtless cry. He pulls out his scimitar and just before he lops of her head, she yells “GAAA!!” —  meaning: “lower the G and A levers.”