Time is a Garden

Yesterday – walking through Alexandria, VA on my off-day from the Steve Vai “Story of Light” tour –  I noticed a telephone pole.

Someone had built a wall of small grey stones around it about six inches high and about 12 inches away from the pole, and in those 12 inches, had planted a delicate, profuse, bushy plant.

I remembered my own failed attempt to beautify the sidewalk strip in front of my house, and thought, in passing, that what made the telephone pole arboretum really work – both in my enjoyment of it as audience – and in the creation of it, was how contained it was.

Today, trying to fit email-answering into reorganizing-my-music-for-tonight, the pole arboretum appeared in my mind’s-eye, and I realized – as I have before – that I scatter my sense of time and accomplishment by not containing the time I spend on things.   My garden, too, overwhelms me because it’s not contained.

I’m not sure what to do about that yet, but the image from the Prince Street Pole will help, I think.  And now I wish I had a photo to show you.  I’ve searched for images on the web, but everything that isn’t it scrubs away at my memory of the Prince Street Pole – so I hope someone who knows the pole I mean will see this blog and post a photo for me of it.

I think it was somewhere around this part of Prince Street – but it could have been anywhere within a mile of here – on any street. 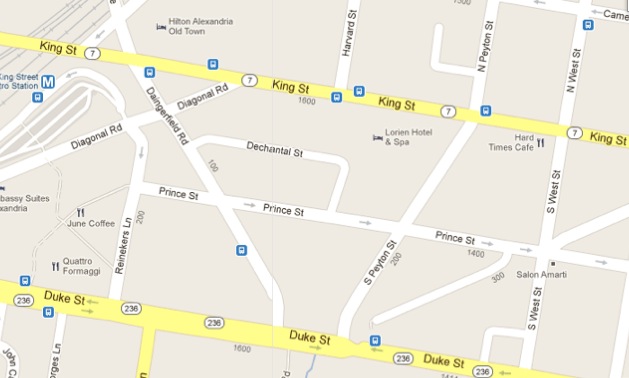 I think it was somewhere near here - but could have been anywhere - on any street within about a mile circumference.

One other thing I noticed – in retrospect – but I’ve noticed this before about other things – is that I wasn’t conscious of how significant the tiny arboretum would be to me later.

I didn’t stop and take a photo of it – in part, because it seemed so self-evident, so perfect.  It didn’t seem unusual because it was so right – and so much like other shrubbery displays I’ve seen.

Only now do I realize the context of other displays was completely different.  The others I’ve seen were in private gardens, surrounding ornamental trees.  But this was on a public street – Prince Street, I think, in Alexandria VA – and surrounding a telephone pole – something I generally don’t even see, and certainly never look at as an elevated ‘something’ to be framed or highlighted.

Yes, me, curator of the Burnt Food Museum, still oblivious to opportunities to frame everyday life as if it were the marvel it is.

Update… Betty Widerski just posted a comment: “This pole?” along with this photo … 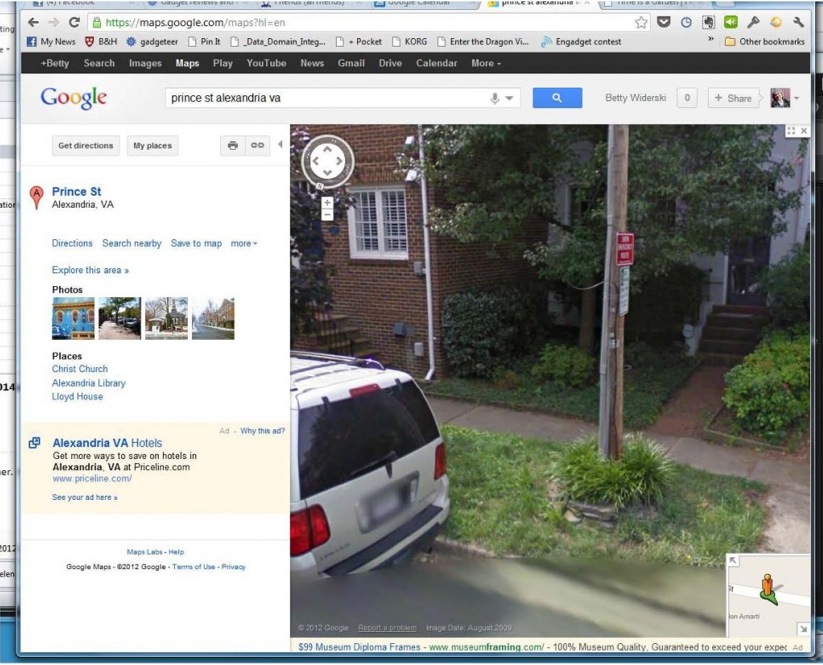 The Prince Street Pole ... on a wilder day?

… and YES, that’s the pole!  I believe it’s had a recent manicure, though – as I remember it being both exuberant and precise yesterday – and from close up, at the magic hour when the sun slants towards twilight, I saw delicate flowers and intricate foliage.  Or maybe I just fell in love with it and saw all that inside my head.