“What is your favorite Steve Vai tune to play and why?” – is what a friend asked me about my touring with Vai’s “Story of Light” tour.  “Yikes!” I thought – almost every one is a favorite – but  all for different reasons, so I’ll just start with: 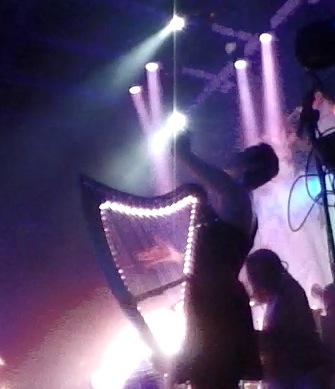 This piece, from Steve’s new album “The Story of Light,”  is what I’d call cinematic and epic, and I start off playing in a very orchestral style on this piece.   By that I mean that it’s not ‘groove’ or rhythm playing – but – hmmm… how do I explain this?

Well, if you’ve ever looked at an orchestral harp part, you’ll see that the harpist is waiting and watching and comes in with a kind of splash of sound, kind of like the cymbals do, in that the sound is used for accent and color, not for structure or melody.

And that’s how I’m playing at the beginning of Weeping China Doll.

Now that I think about it, my playing on Weeping China Doll falls into four categories:

Here’s what the cheat-sheet I made for this piece looks like: 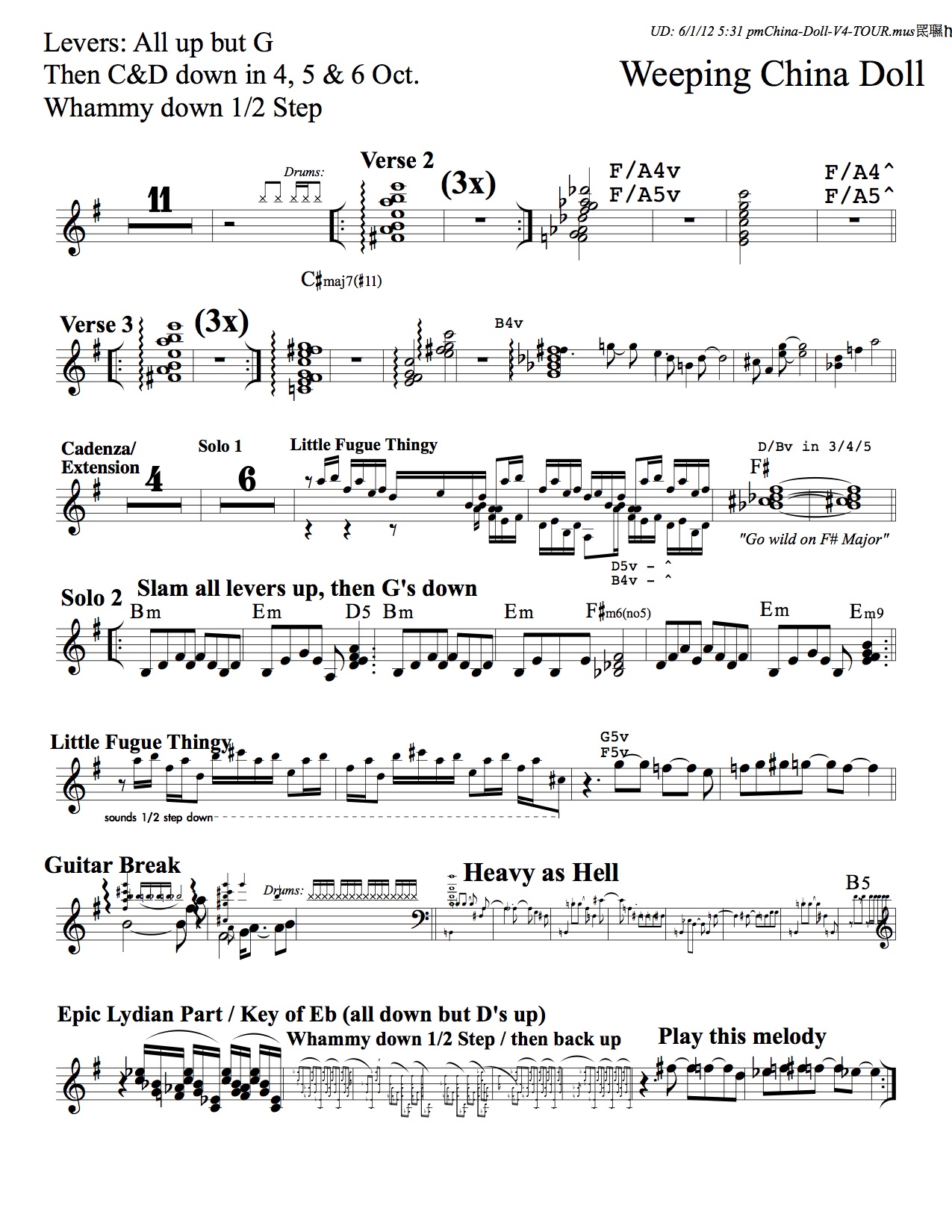 My cheat-sheet for "Weeping China Doll"

I actually play many more notes than what are written  this page – but this cheat-sheet gives me the basics and fits on a single page so I can reference it on my iPad.

(And by ‘reference’ I mean that for the first 5 weeks of the tour, I had my iPad on stage with me and would swipe from one song to another so I could remember what to play. And getting each of these tunes down to a one-page cheat-sheets was one of the biggest challenges of the music — one of those hidden things I’m very proud of.)

On the first line you’ll see some of those splashes: a bunch of notes all piled on top of each other.  On the 2nd and 4th line where it says “Little Fugue Thingy” is the melodic line. On the 3rd line is the arpeggiated accompaniment that it’s unlikely anyone can hear – partly because it’s in a range of the instrument that’s covered.  Where it says “Epic Lydian Part” is another accompanimental line that’s beautiful … and thought it’s unlikely it’s heard, I love it.

You’ll see where I use the whammy to shift down a half-step in lines 5 & 7.

And then … there’s the part that says “Guitar Break” – which happens at the end of the tune as well, but I didn’t write that on the cheat-sheet.

It’s these Guitar Breaks that are most unique. 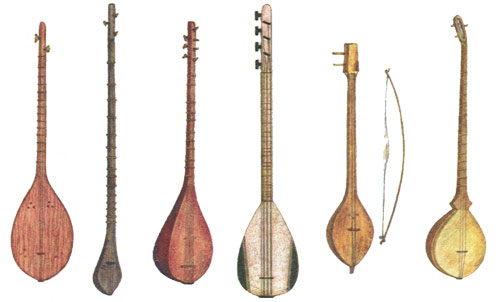 I just asked Steve what the actual instruments are in this section on the album and he said that he created it by playing four or five different instruments and then gave me these names: Saz , Oud, Mandolin & Cavaquinho.

The following links are random links and photos I found for the instruments. 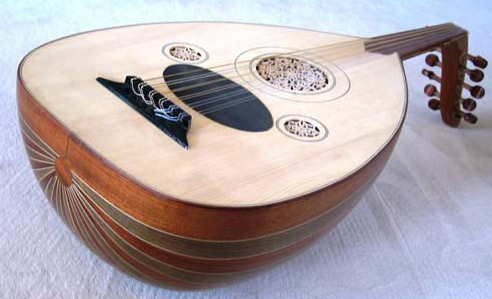 When I was working out these parts,  I listened over and over to that section and asked Steve to write out the different lines.  Then I tried to create a composite of all the lines, and create a sense of using different instruments by playing parts of the composite differently. 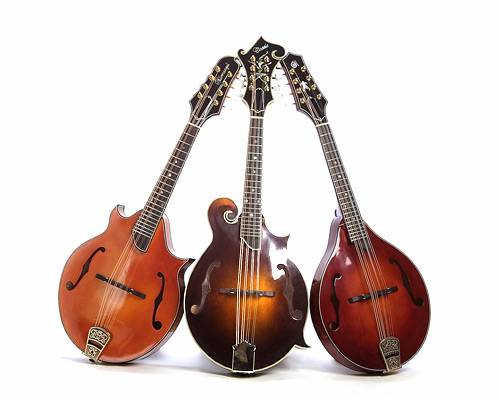 So I use a soft glissando, a block chord, a downward-broken chord, and a sequence of notes I play near the soundboard (to make them sound more muted and woody) and I use the tuning levers to do a fast bend on those notes (to sound like someone

fretting them). [I’ll try to make a quick video to show this but I don’t have one right now]

Yikes!  I never tried to describe what I’m doing there, and hadn’t really thought about what instruments Steve had used.  I’d just listened to it, seen the written lines and then tried to make what I was playing give the same effect.

“Weeping China Doll”  has some very fast chromatic shifts.  For non-musicians, what that means is that the music shifts from key to key very quickly, kind of like if you took the music up one floor in an elevator really fast – and then back down.

Every instrument has limitations and fast chromatic shifting chords is one of the hardest things to do on mine.  On a lever harp – my instrument – you use your left hand to shift from key to key – so if you’re already using both hands to play a bunch of notes, you can’t make that shift. 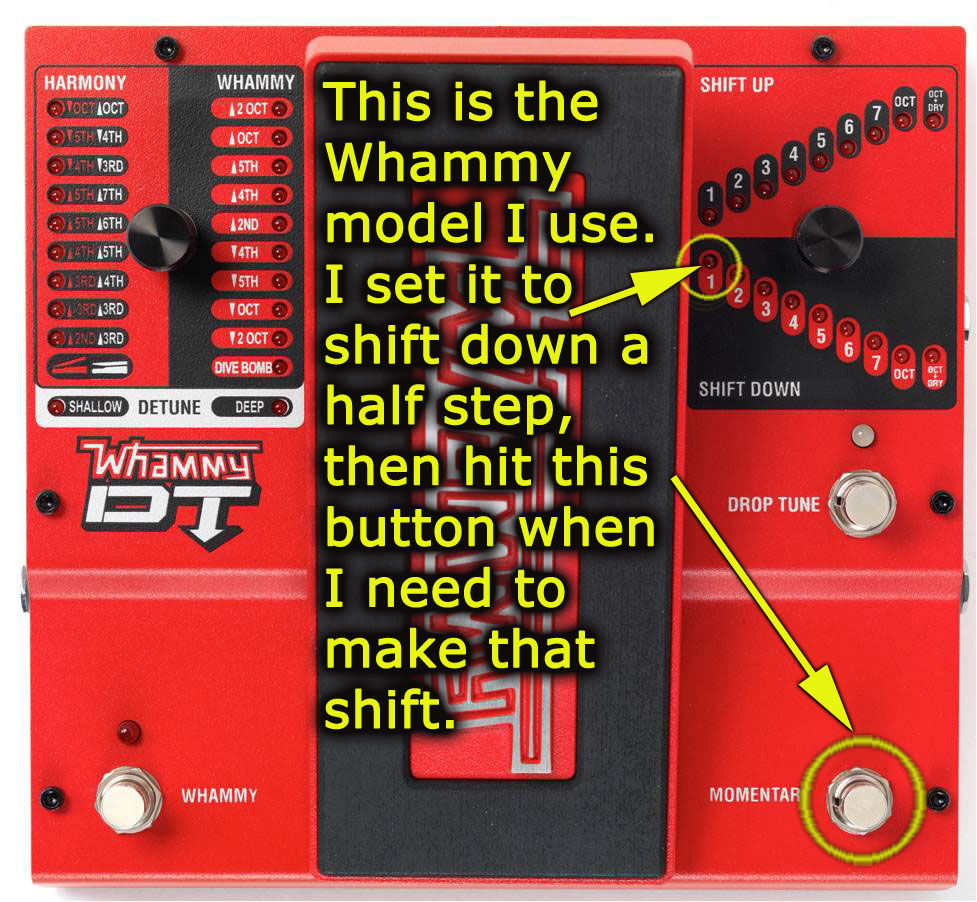 Whammy settings and what I stomp on when

That’s where the Whammy Pedal comes in handy. One thing a whammy pedal does is electronically shift the whole harp up or down a step (or however many steps you set it to shift).  So I set it to shift the harp down a half-step and then just hit the pedal when I need to.

So, one reason I love playing this piece is that it lets me use a lot of skills I’ve developed in many different musical lives: as an improvisor, early-on as an orchestral player, and then using technical equipment borrowed from the world of electric guitar.

In other words, I get to play orchestrally, get to improvise somewhat and I get to use a cool pedal.

There are 3 other reasons I really love this piece that have nothing to do with the notes themselves. 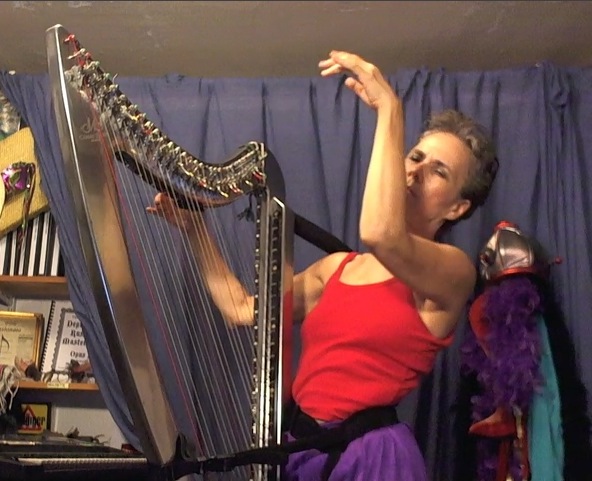 1. PHYSICALITY:  When I was working on the piece with my coach, Marta Cook, we happened to also be watching some videos of the dance work of Pina Bauch – and just for fun, I experimented playing the orchestral-type chords as if I were Pina Bauch, and letting the impulse of playing the chord almost throw me back from the instrument, then rolling forward again as if my hands were a slow swirling wave.

It’s very different than how I usually play, but feels very much like it works with the music and connects me to the emotional story of it.

2. STORY & CHARACTER:  This piece is very cinematic, and the harp seems to almost have a character in the story of the piece, so playing through the piece is like acting through a story, being a character who moves from soundscape to soundscape.

3. MEMORIZATION TECHNIQUES:  And finally – when I was working on all the pieces, I kept avoiding working on this one, in part because I was overwhelmed and intimidated by memorizing all the lever-shifting I had to do to play the piece.

I found this piece so challenging at first that I signed up for an online memory workshop in memory, and my coach, Marta, and I took the workshop together.

When the leader asked for volunteers, I raised my hand, then felt bad because I figured that memorizing lever-changes for the harp part for a Steve Vai piece probably wasn’t a useful exercise for the group as a whole.  But, to my surprise and admiration, the leader pointed out that you can use the same techniques to memorize anything and they involve creating a story that in some way helps you remember what you need to remember.

Soooo ….. as soon as the hour-long course was over, I immediately invented a story that – even now – helps me remember what shifts I need to make on the harp.  And since this blog is already pretty long, I won’t tell you the story here, but remind me and I promise I’ll tell you in another blog.

And those are the reasons why playing “Weeping China Doll” is one of my favorite parts of each show!  I hope I don’t have so many reasons for all the other pieces, or this will turn into a dissertation!