Small is the new Big – “Honey, I Shrunk the Harp!” 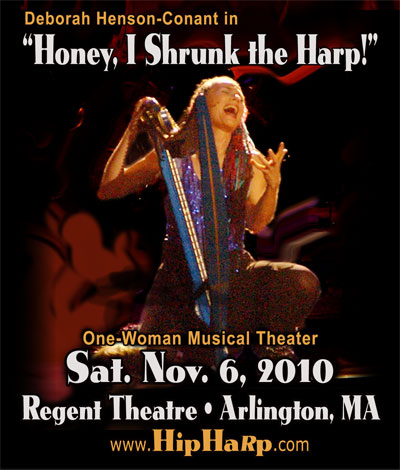 Honey, I Shrunk the Harp!

“Honey, I Shrunk the Harp” is a music-theater piece I started developing last summer at performance camp in Maine.

Er … yes … I go to performance camp. OK, OK … you could call it a theater ‘retreat’ – and I go there to work with other professionals in different fields like dance and theater, to push myself into new areas of artistic expression. So this new piece combines music, theater and …gulp … dance. Well, no – it’s not really dance — it’s stylized physical movement. OK, dance.  Actually — it’s simply whatever I have to do to make the music and the story as clear as possible in every way: with words, music, movement and images.

What I wanted to do with this piece was to create a metaphor for my own metamorphosis of the past two decades from classical harpist to collaborating in the invention of a completely new instrument –the electric harp — that’s become my signature instrument.

Instead of just telling the story with words, my friend Alex Feldman, a physical comedian, suggested I create the experience as a theater piece, to actually show the experience of peeling away layers like a musical striptease, digging into styles like an archeologist, and showing how the changer is changed through changing an object of desire. Sound serious? Well the more serious I get about it, the funnier it gets!

And I think this is a universal experience: the stages of misconception, exploration and discomfort it takes to actually find a way to expression that’s true to who you really are.

There were times on that journey, when I felt like I was moulting – like a snake or a chicken — knowing my skin didn’t fit anymore. Not sure how to get out of it, but extremely uncomfortable inside it. 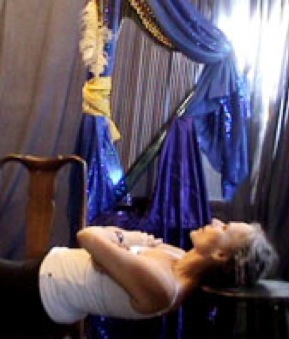 “Shrunk” at the shrink

There were times I felt a powerful, pure force trapped inside the massive size and ornate decoration of the concert harp and I had to get it out. Times I discovered a part of the instrument it seemed that no-one else had ever touched – and that was now truly mine.

And there were times I felt completely silly. Like – why am I trying to turn this instrument into something it just isn’t … and ditto for myself! Double ditto!!! But I just kept doing it, changing me, changing the instrument, changing me … like a game of metamorphical leapfrog.

In life this all happens so slowly you barely see the change, but on the stage I could encapsulate a 20-year metamorphosis into 20 minutes. Thus was born “Honey, I Shrunk the Harp!”

And all this is possible because of one man, Joel Garnier, of CAMAC harps, invested in my vision 20 years ago and started building instruments specifically for my performance style . 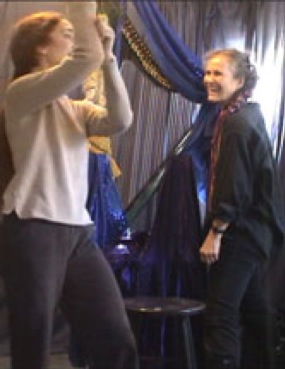 Now the second generation of CAMAC visionaries has brough that to complete fruition.  A little over a year ago, Jakez Francois of CAMAC harps, handed me the prototype of the new instrument they’d built for me, it just felt completely right, like it was the arm I’d been missing, like it had been made for me — which, in fact, it had.

My vision of the instrument had been so strong from the beginning that now that I finally have it, it seems self-evident to me. It’s taken other people to point out that I’m in the midst of an historical moment with this instrument. It’s like living through the the ’40’s when Les Paul made the first electric guitar — only this is the first commercially produced carbon fibre electric harp.

There’s also one other big difference – and don’t believe it if anyone tells you size doesn’t count!

But small is the new big. The harp I have today has shrunk from an ornate 75lb, 6-foot tall musical edifice into an 11-pound carbon fibre powerhouse I can strap on with a simple harness.

This instrument gives me the power, the range and the physical flexibility create music-theater pieces where I am my own orchestra, a creative laboratory — and “Honey, I Shrunk the Harp!” is my newest experiment, which tells the story – in music, theater and movement – of the very metamorphosis that brought me here.

The piece is about 20 minutes long, so I’ll likely start the show with it and then kick back with pieces I’m more familiar with – including some from my all-harp musical “What the Hell are you doing in the Waiting Room for Heaven??” and from my new show “Strings of Passion” — and then I’ve already started getting requests, so I’ll definitely try to play a few of those, which I always enjoy.

If you join my fan page on Facebook, you’ll see pictures of “Honey, I Shrunk the Harp!” as it develops — and it will develop right up until November 6th, when the audience at the Regent sees it for the first time. I really hope YOU will be there!!

But even if you can’t be, tell your friends, share the widget on the show page and stay in touch. Join me on line. Watch the show develop at Facebook, Twitter, and here at my blog. I love sharing the projects I’m working on and I love it when I preview new material and people come and give feedback!