Half-Bake Project (First Draft) DUE Sun. May 29th at Midnight

We made this page in response to a question from a student who was confused when people said things like:

“Put your harp in C”

I hope this information is helpful in clarifying what that means.

A smidgeon of history:

This may have had to  do more with the other indigenous instruments in that culture and what scales it was easiest for them to play.  At that time, it wasn’t standard for every harp to have a full set of levers, so having your harpstrings actually tuned to the most likely key you’d be playing in was essential.

It used to be that lever harps in the U.S.A. were tuned to a C scale, and much of Europe tuned their harps to Eb.

Nowadays, Eb is the conventional standard tuning for lever harps, because it allows harps with a full set of levers to play in the greatest variety of standard keys.

Here’s how you TUNE your STRINGS to Eb MAJOR

Here’s how to LEVER your HARP into C MAJOR

Once your harpstrings are TUNED in Eb, do this to lever your harp into C Major:

If you tune your harp to a different key…

Some people tune their harps in F, or Bb because of the kind of music they play.  So long as you can play your harp in the key of C Major during the course, you should be able to do almost everything in “Hands on Harmony.”

It’s up to you whether you want to retune your strings to Eb for the course or just know that your levers may be set different from mine and you may not be able to do some of the more advanced alterations or modulate to all the keys.

For those of you who learn better visually instead of verbally, here’s a diagram to illustrate how levers should look in all the keys that a fully-levered Eb harp can play. 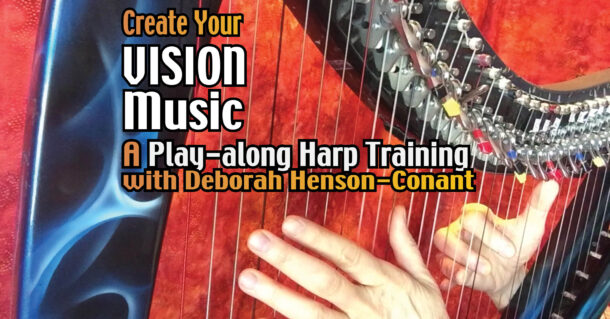 Join Me for
"Create Your Vision Music"

Joining this workshop also gives you a subscription to my weekly-ish ezine with stories, events and info about shows and classes plus emails about this workshop and trainings. You can unsubscribe at any time, but most people say they really enjoy my emails - and I hope you will, too!