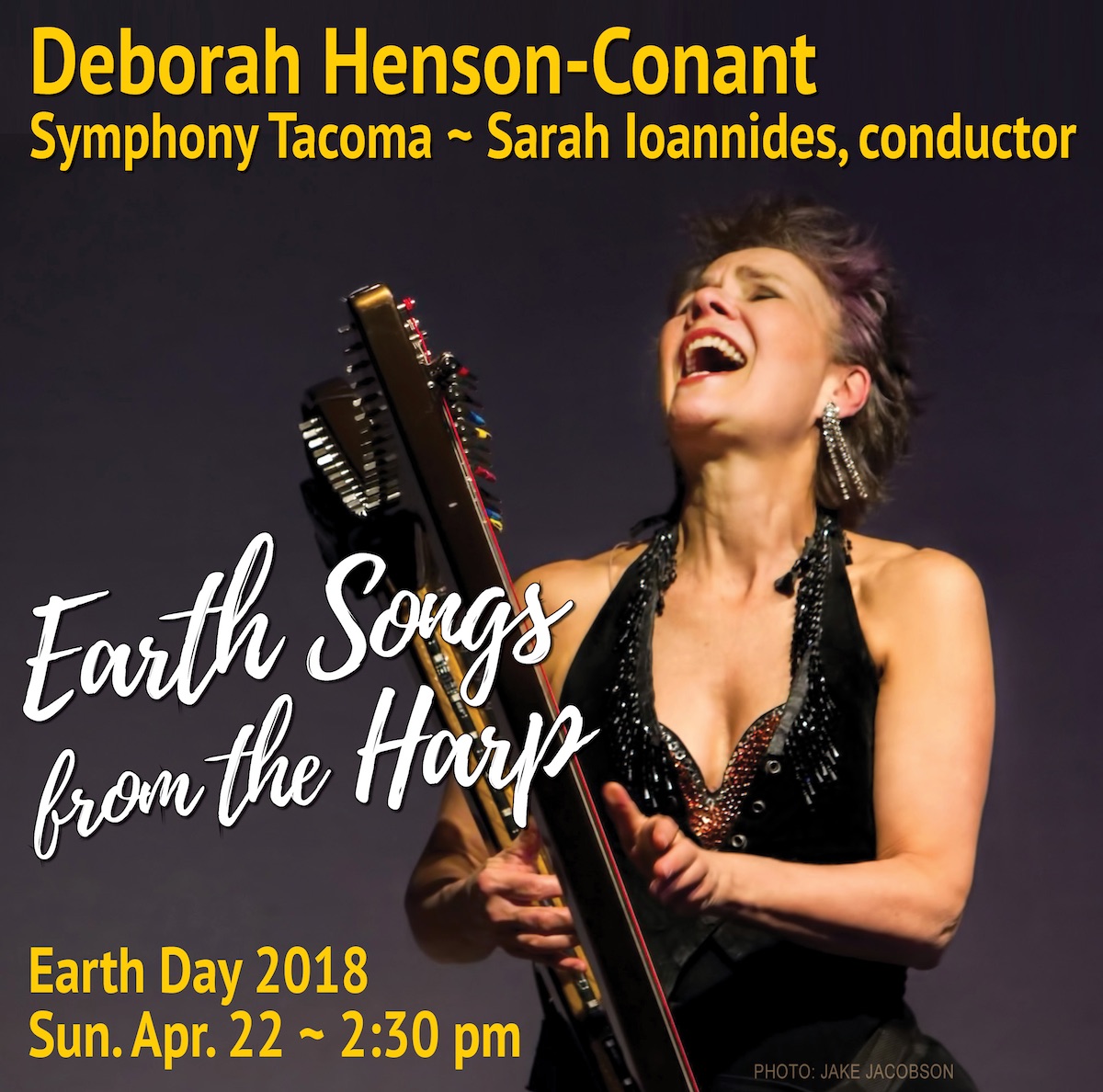 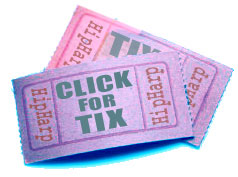 TACOMA – SEATTLE! I’m talking to you!

In this video I give you a quick overview of what we’ll be doing in the show and how it relates to my recent TEDx talk. Click to Share this page with friends:
Facebook
Twitter
Linkedin

What does the AUDIENCE say?

Deborah Henson-Conant is a GRAMMY®-Nominated composer, performer, singer, songwriter, entertainer, humorist and the world’s foremost electric harpist. She’s performed throughout the world, opened for Ray Charles, toured as a band member with rock legend Steve Vai and as a soloist with the Boston Pops, jammed with Bobby McFerrin onstage and Steven Tyler offstage — and released a dozen albums from Latin jazz to Celtic to blues.

She’s also revolutionized her instrument with a custom-made, 32-string electric “harness harp.” What can you expect from Deborah Henson-Conant? Well … this is not your grandmother’s harp! She strides on stage like a rock-star, with a powerful chrome-silver triangle, strung with 32 multicolor strings, an instrument invented specifically for her by the CAMAC company, in France.

She’s the harpist your parents never warned you about — the world’s premiere electric harpist. She plays music from Blues to Flamenco, she sings and she talks to the audience. She “dresses like a showgirl, plays the pants off the harp and tells tall tales with the ease of a stand-up comic. Imagine a talkative Harpo Marx in a mini-skirt and you begin to get the picture” (Cleveland Plain Dealer)

“It’s her dazzling range and depth of technique, combined with a warmly engaging energetic stage manner, that ultimately makes this such a memorable show …” (SW Metro – Edinburgh, Scotland)

“Virtuoso out-of-the-box harpist… known as the rockin’ bad girl of the harp world. She took the ancient instrument off its pedestal, cocked it up on her hip, and made it play everything…” (NPR: On Point)

Described by The New York Times as a conductor of “unquestionable strength and authority,” Sarah Ioannides has won praise from audience and critics internationally. Now in her fourth Season as Music Director of Symphony Tacoma, Ms. Ioannides has gained recognition as one of the most engaging and respected conductors of her generation.

SPREAD THE LOVE!! HELP ME PACK THE HOUSE!! 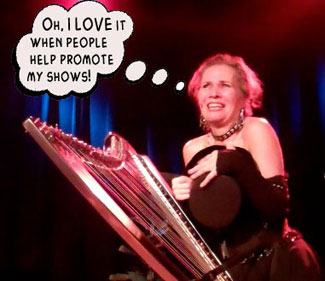 Here are 6 Things you can do to get my undying love and admiration! Here are simple ways you can instantly be part of our promotions team via email and social media. And if you want to email to let me know you’ve helped promote the show, I’ll want to personally thank you with a big hug at the show!

1. EMAIL or TEXT your friends in the Tacoma area. Let them know about the show and why you think they’d enjoy it and share the link to THIS page with them!

EXAMPLES to share in Facebook posts. My friend Deborah Henson-Conant – an electric harpist! – has a show this weekend with the Symphony Tacoma. If there’s any way you can get there, don’t miss it! https://hipharp.com/blog/

I’m going to see one of my favorite performers this weekend perform LIVE with Symphony Tacoma!  Meet me there? https://hipharp.com/blog/

There’s a show I’d LOVE to go to and I can’t! If you’re near Tacoma, WA, don’t miss it! And if you’re up for it, take pictures and send some to me afterwards? https://hipharp.com/blog/

DEBORAH HENSON-CONANT is a Grammy-Nominated recording artist. Guitar Legend Steve Vai calls her “The Jimi Hendrix of the Harp,” NPR’s Scott Simon calls her “the [imagined] lovechild of André Previn and Lucille Ball.” She sings and plays electric harp. She composes for symphony. She performs one-woman shows and concerts internationally. She debuted with the Boston Pops, opened for Ray Charles at Tanglewood, had her own music special on PBS, jammed onstage with Bobby McFerrin & Mason Williams, offstage with Steven Tyler. She’s been featured on CBS “Sunday Morning,” NBC‘s “Today Show” and NPR‘s “Weekend Edition.” For the past 20 years she’s collaborated with CAMAC Harps in France to develop the “DHC Light,” the worlds first commercially-produced carbon-fibre electric harp.

See her once and you’ll never look at a harp the same way again.

Use the share buttons below  – each lets you add your own message and send people right to this page.