Now YOU can play Merceditas on Pedal or Lever Harp

And we’re looking for 50 100 daring harpists 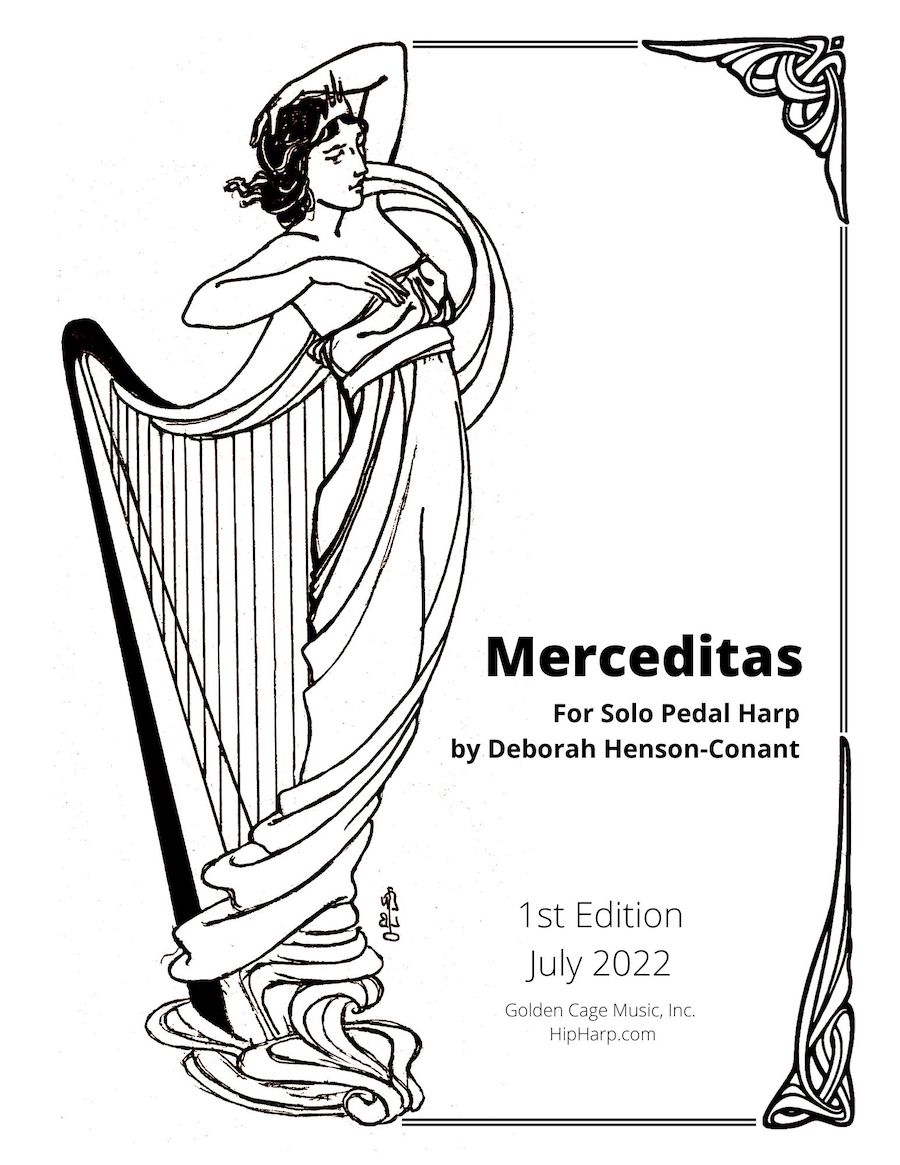 “Merceditas” is the most unabashedly romantic instrumental music I have ever written and is the companion piece to “Baroque Flamenco.” Played together with “Baroque Flamenco” it creates a bridge for the audience between the sound of a classical harp that they’re used to hearing, and the extended techniques of “Baroque Flamenco.”

Originally composed for two harps and orchestra, debuted in Prague at the World Harp Congress in 1999, then with solo harp and orchestra on the Grammy-Nominated album “Invention & Alchemy.”  In 2022 it’s just been released by Evelyn Huber and the Salzburg Philharmonic in the concerto suite “Soñando en Español” (see their video above). But it’s been unavailable for SOLO harp … until now!

NOW YOU CAN PLAY IT on solo concert harp – or in the brand new adaptation for LEVER HARP. And I invite you to be one of the first harpists to ever play it.

For the first time ever, Merceditas has been adapted for solo harp. This new solo concert harp arrangement makes it possible for any advanced pedal harpist to play the piece as a solo – and the new Lever Harp adaptation is for intermediate to advanced lever harp players.

YOU are  invited to be one of the first 50 harpists to EVER PLAY IT. Read on for more about that.

And we’re looking for 50 100 daring harpists

Above, you can hear the concerto version of the piece in the 2022 album release by Evelyn Huber with the Salzburg Philharmonic.

During the Pandemic a small team of intrepid harpists from around the globe worked together to transcribe the orchestral sections of Merceditas, the 2nd movement of my concerto, so it can be played on solo pedal harp [Lever Harp players – we’re working on your version, too!].

Now we’re inviting harpists around the world to be the first to play this transcription and send us a short (15-60 second) video of any small part of the piece by AUG. 20th, 2022 which we’ll compile into a composite video.

The goal of these videos is NOT to create a composite masterpiece, it’s to document this moment of transformation as the piece comes alive in the hands of the first 50 harpists in the world to play it.

It’s like that moment when a butterfly emerges from its chrysalis.

Only this chrysalis is the written music  – and your hands are what set it free.

I invite you to play any short section of the piece (in a video 15-60 seconds long), on any harp, in any circumstance from a concert hall to a late-night video in your pajamas. It’s not about playing it perfectly.

It’s about bringing it to LIFE.

Are you one of the first 50?  If so, follow the directions below.

Join Us for the "First 50 Players" project!

Any intermediate-to-advanced harpist – on Pedal or Lever harp.

Here’s how it works:

I can’t wait to see this piece come alive in YOUR hands!

About the first Solo Harp Edition

Below are three excerpts from the new First Edition Solo Harp Sheet Music – Pedal Harp version, with timing indicators for where you can hear this part in the orchestral recording with Evelyn Huber and the Salzburg Philharmonic above. Click on the music to see it larger.

Lever harpists – we’re working on a version for you – but if you want to take part in the “First 50 Players”, take a look at the 2 Cadenzas – they’re both playable as written on lever harp. 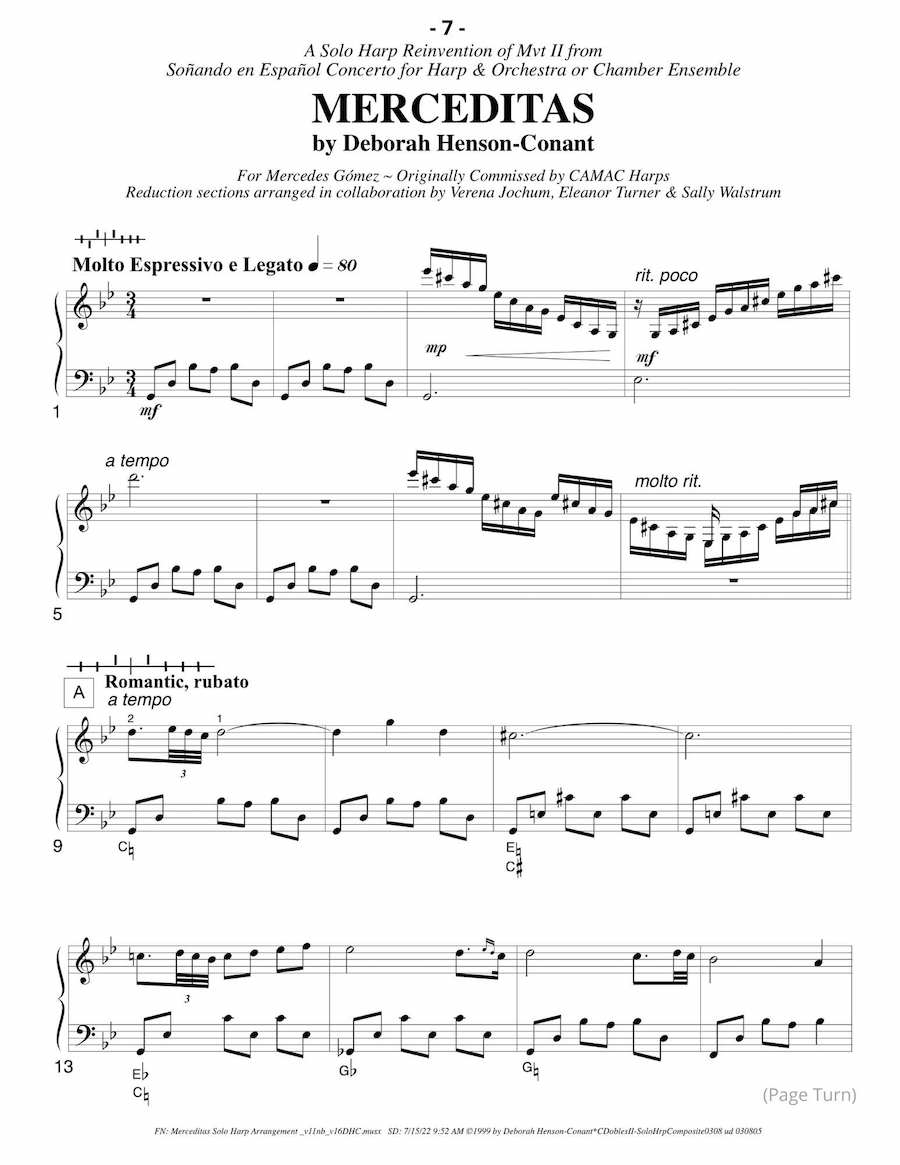 This is the intro and part of the opening theme. This section is exactly the same as the concerto version. 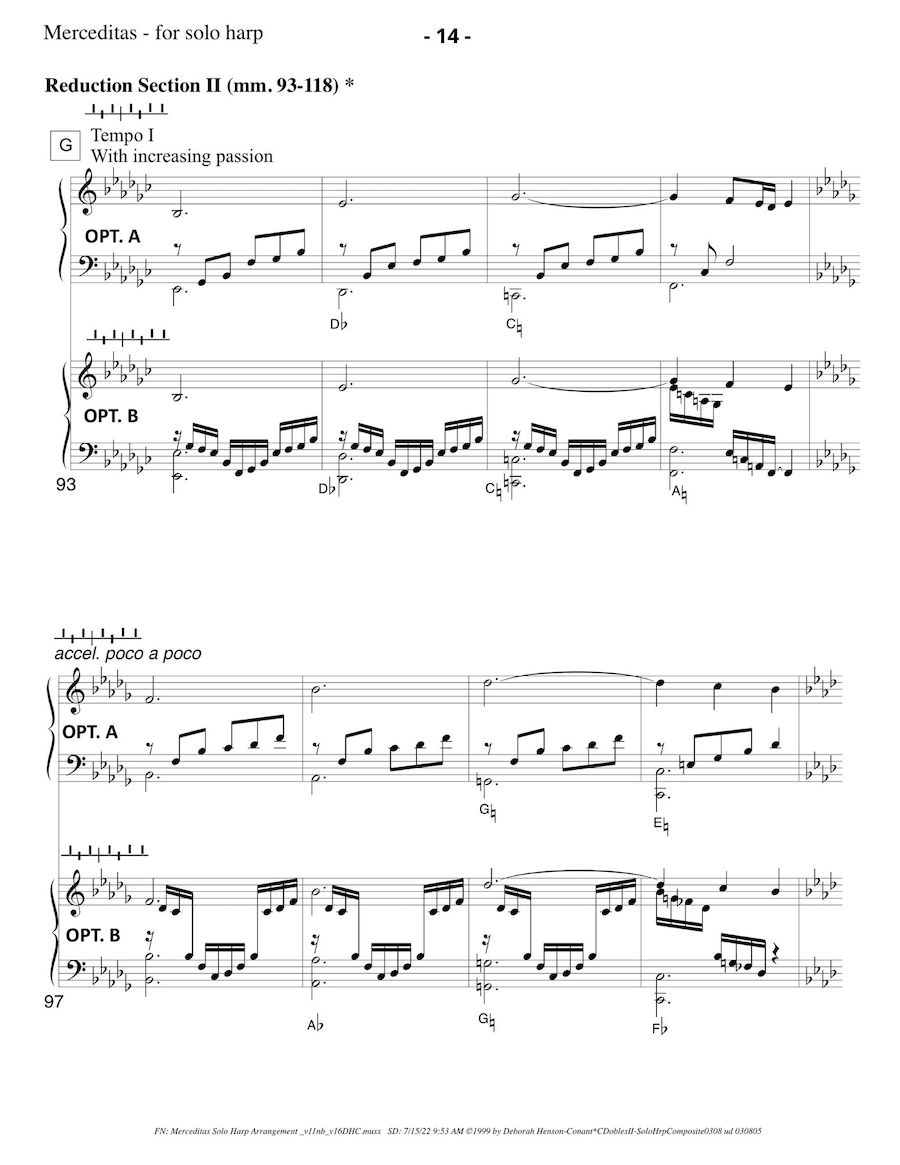 An example of one of the orchestral transcription sections, where you have two different options for how to play it. Don’t be deceived that the ‘simpler-looking’ one is less advanced or professional – they’re two different interpretations, both by advanced harp players – and they both work beautifully as transcriptions that combine the orchestral writing and the harp part of the concerto. 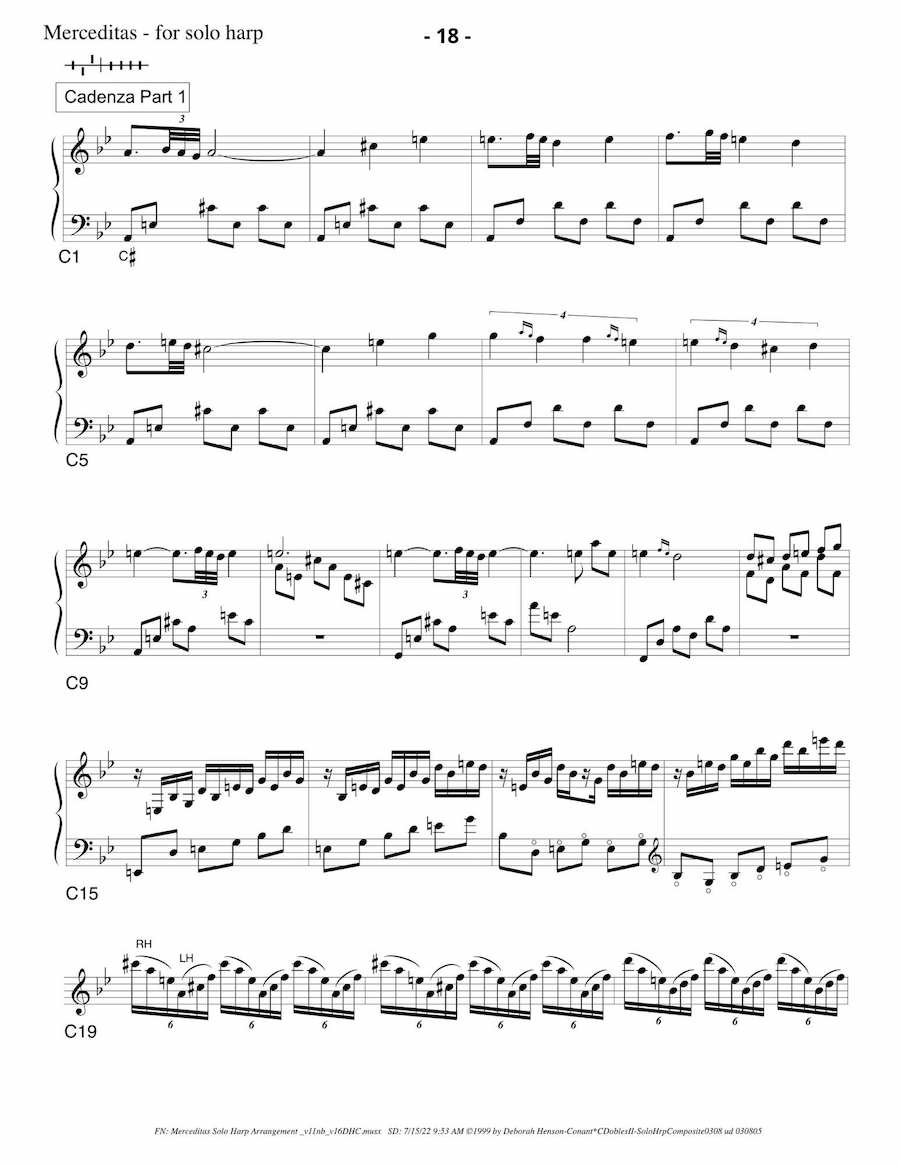 This is the first page of the Cadenza – all of which is playable on lever harp as well as pedal harp.  Notice that Evelyn Huber – who’s playing in the video above, altered the cadenza slightly around measure C15. That kind of freedom on the performer’s part is often taken in cadenzas, and it’s fine to do it. 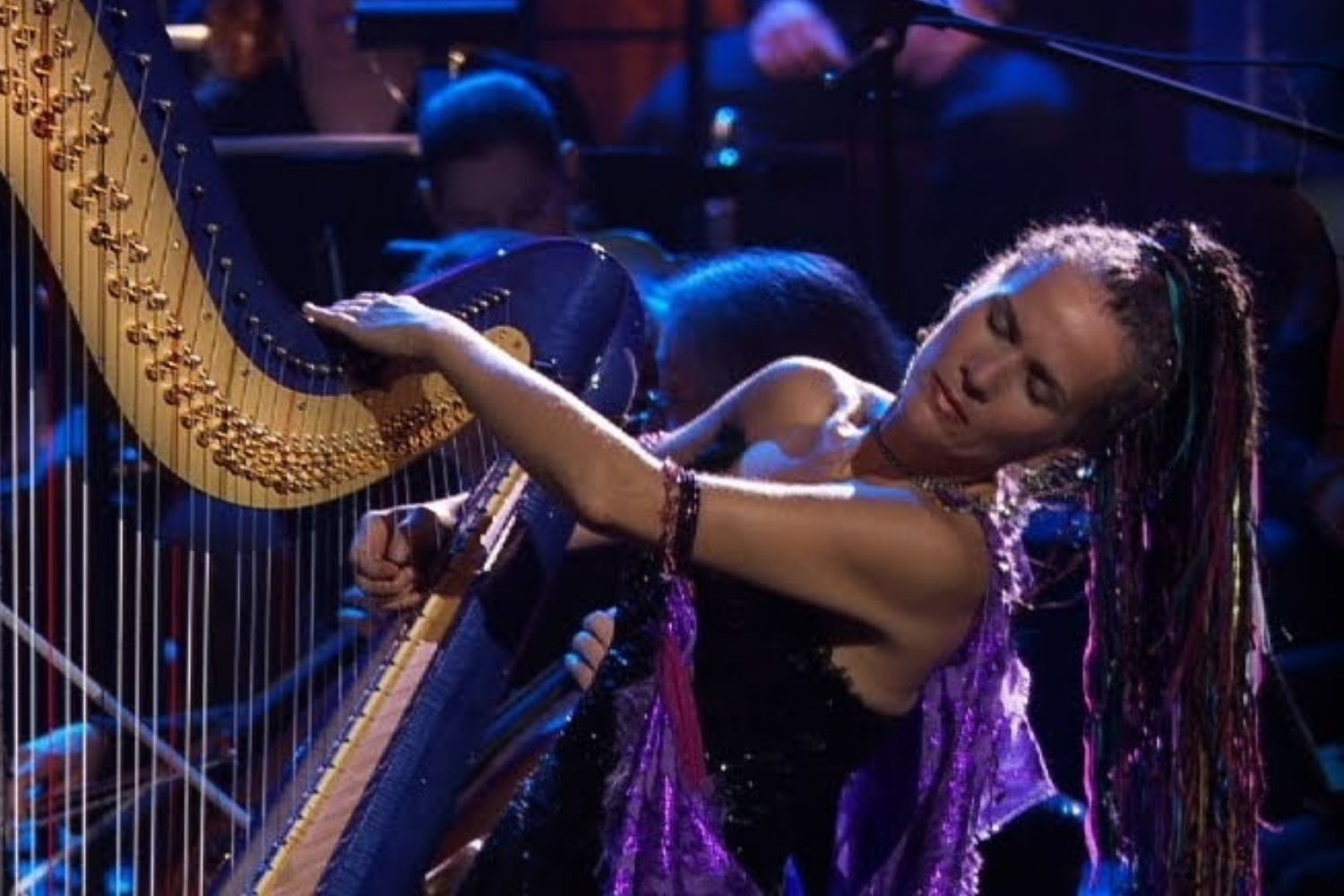 I originally wrote Merceditas as a double-concerto commissioned by Joel Garnier of CAMAC Harps, to premiere with my beloved friend Mercedes Gómez and the Prague Radio Orchestra at the 1999 World Harp Congress in Prague.

Mercedes and I had each recently fallen in love, and I dreamed we could each dance – in our separate kitchens thousands of miles apart – with these men we’d given our hearts to. This was the waltz I created for those dances.

So it’s a piece that grew out of love, friendship and partnership in many facets: my deep musical friendship with Mercedes, the romances we two shared with each other like schoolgirls and my growing relationship with CAMAC Harps which would eventually lead to the development of the “DHC Harp.”

As a composer, I was excited about the expanded chromatic possibilities of composing for two harps. By alternating between them – with each set in a different key – and using the Symphony as harmonic support, I could create lush harmonies and emotional chromaticism.

But how often do you get to perform a double-concerto?

After the premiere there was very little chance to perform the piece, and I loved it so much that when I created the ‘Invention & Alchemy’ project – which went on to win a Grammy Nomination – I re-invented “Merceditas” for solo harp and symphony orchestra – and combined it with different first and third movements.

Transforming a double-concerto to play on a single harp meant there were several complex pedal change sections – but to my joy, it was wonderfully playable! Suddenly the piece existed as a solo harp concerto with orchestra or chamber ensemble, and harpists started playing and recording it.

But how many harpists have a Chamber Ensemble or Orchestra to play with??

So when harpists Sally Walstrum and Verena Jochum suggested creating a solo version, I said let’s adapt it together, as a team. We heard rumors that Eleanor Turner had played it as a solo, and she sent us her notes. Sally and Verena, along with Jason McKinney – who consolidated the changes into the manuscript – took on the task of adapting all the purely orchestral sections for solo harp. Then Heleen Vandeputte joined as our First Reader. We had a team!

Our little team committed to creating a solo adaptation of the piece so that pedal-harp players all over the world could play the piece whether or not they have an ensemble or orchestra to play with. That meant that all the sections originally for orchestra had to be transcribed and reinvented for solo harp.

This piece is the first publication of my 7-year Legacy Project – a project to release all my concert works into the hands and voices of others. And thanks to the Legacy Project team, the piece can now be played in three dimensions: as an orchestral concerto, with chamber ensemble – or on solo harp. This allows access to this music to every pedal harpist in the world – and takes us one step further on a journey to bring the harp out from the back of the orchestra to the front.

And yes, lever-harp players – I’m working on an adaptation for lever harp too. 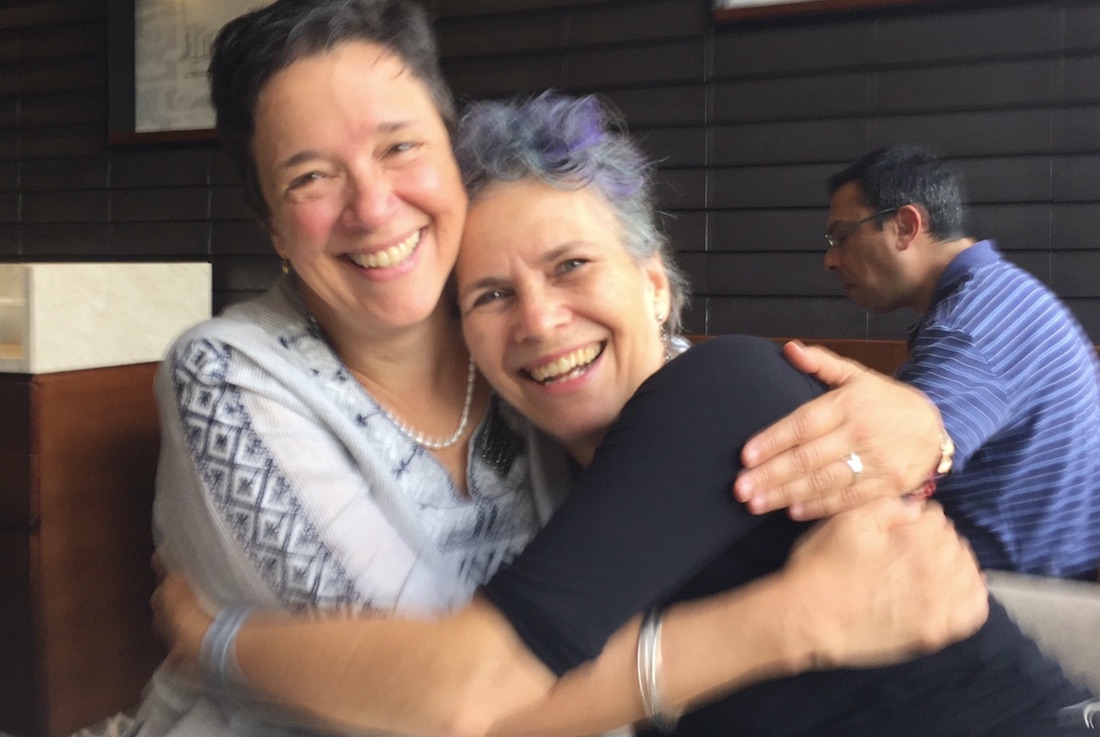 The “Merceditas” transcription and publication is part of my 7-Year Legacy Project.

The Creative Team of harpists for the “Merceditas” project was: