It was one of those things where you just blurt out, “I wanna do THAT!” when it’s something you’ve never done before, and have no idea if you can.

It was 2011. I was home from tour and heard that the UltraSonic Rock Orchestra was playing at my local theater: the Regent. I was having coffee with theater manager, Leland Stein, when I blurted out  “Hey, ask them if they want me to play a Hendrix version of ‘Star Spangled Banner’ at the shows.”

If you’re new to this blog, I should say here that I play the harp.  OK, it’s an electric harp and while I have been called the “Hendrix of the harp” — ’til a few weeks before that I’d actually never played any Hendrix, and … forgive me … but I’d never really listened to “Star Spangled Banner” – I mean the Hendrix version.

So I came into this project like I do to most popular culture experiences: as an alien.   Which has a lot of advantages.

I found a YouTube video of Hendrix’s “National Anthem” Woodstock performance and started watching.  At first I tried to copy it note for note, but I knew I’d never remember that. So I typed up the lyrics and then just watched and listened, scribbling onto the lyrics:  small squiggles where Hendrix bent notes, larger blots and bursts where that’s how the music sounded – just illustrating what I heard. Suddenly the piece came into view and I realized what Hendrix had done wasn’t a random distortion of a national symbol, but an emotional, moving tone-poem illustrating the words he was playing. 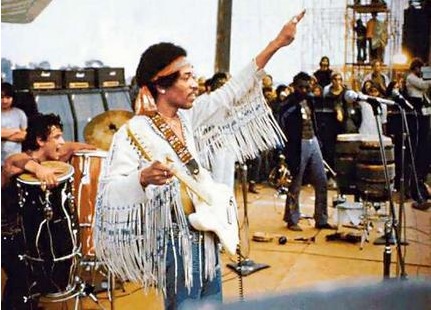 Far from defiling the song in any way, Hendrix intentionally illustrated the words.

Would I have noticed this if I hadn’t studied Debussy and Mahler, if I hadn’t listened to Wagner or art songs?   Who knows.

But once I realized it was a tone-poem, I didn’t have to work out ‘the notes’ — I just followed the same map Hendrix followed: the words of the anthem.  If you follow the words either listening to my version or the Hendrix version, you’ll hear immediately how ever musical ‘departure’ from the melody closely illustrates the words.

One of the most moving moments of the piece, for me, comes after the words:  “Gave proof through the night that our flag was still there …” 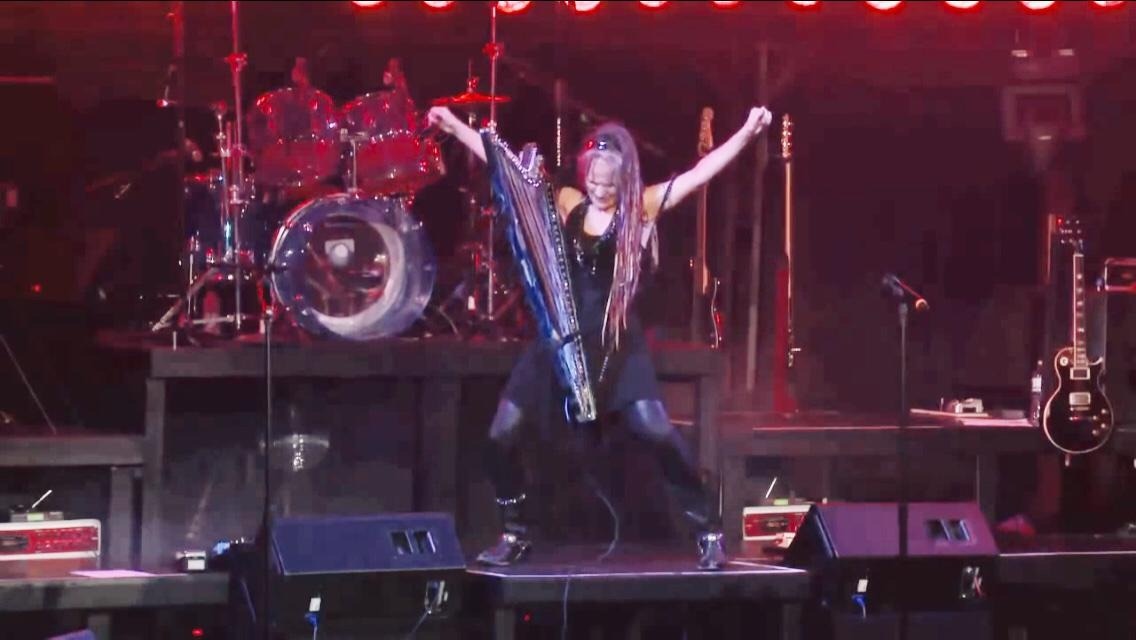 High on my own personal Hendrix Experience

One of the most moving moments of the piece, for me, comes after the words:  “Gave proof through the night that our flag was still there …”

At that point, Hendrix plays a haunting reference to “Taps” — it’s like a musical double-entendre: Taps is the song of ‘nighttime’, also the song played for a soldier’s death – and the first 2 notes of “Taps” are the first two melody notes of the next part o the song: “Oh say does that star spangled banner yet wave”   — and on “wave” Hendrix flutters the note, making the music sound the way the song says it looked. What’s that?  A gorgeous combination of synethesia and onomatopœia? Or just impassioned creative expression.

I’d call it musical theater – but it almost seems like musical literature.

Translating Hendrix to Harp on paper (below) and on stage (above) 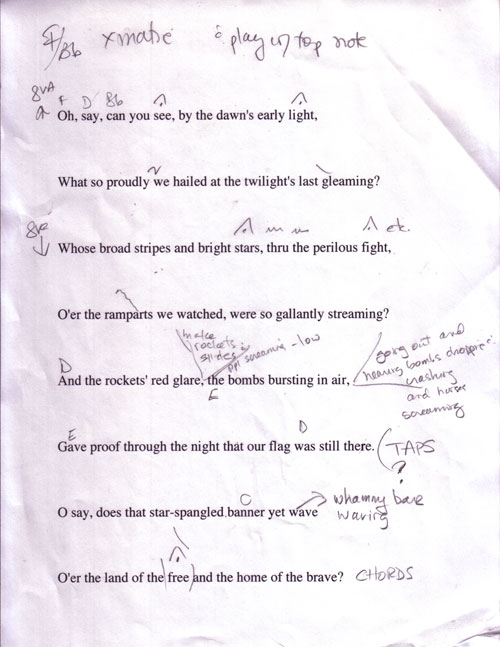