One thing I love about teaching at Hip Harp Academy is getting to see the “Final Beginning Projects” that each student does. This is a culmination of Jade Barnaby’s experience in the Blues Harp-Style class – and this is just the beginning!

This post is from a series that shares the “Final BEGINNING Projects” from my winter 2015 “Blues HarpStyle” online course for harp players. students created short videos based on what they learned in the course, and answered 5 questions about what they got from the challenge of this project.

Join us for a FREE INTRO to the Summer of Improv
It's a "Blues Jam HARP Challenge Camp!

Learn more about Hip Harp Academy, a year-long membership program for harpists who want to develop their skills and self-confidence in improv, arrangement, performance and self-expression - with an award-winning coach and a vibrant, supportive creative community. 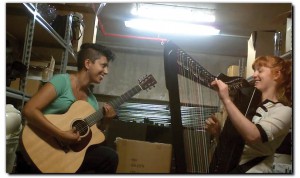 1. Give a short description of what it took for you to get to the place of being able to play what you did – both logistically and emotionally

Emotionally, attempting and having confidence to create my own piece of work and not read music note-for-note was excruciatingly hard. Logistically organising to play with another musician in a relatively short period of time was also very difficult. The week we recorded it had been stifling hot – it had been 36 C or 97 Fahrenheit all week! It was humid and we were trying to sneak down to the Storage Room during work, between meetings, to record. Kirsten had to run to catch the train after our last attempt!

In some ways the Storage Room was the perfect place as it was secure and offered us a lot of privacy to practice safely without disruptions and distractions, I highly recommend it! But in other ways it wasn’t an ideal environment and timing.  In the end both emotionally and logistically, I just had to let it go and accept that I wouldn’t in the first instance create exactly what I had in envisioned in my mind…  and that’s okay, and in the end some things I actually liked better than what I had in mind.

The blocks were starting and resigning that I had to do something more simply first.  Having structural limitations, such as the actual structure of the 12 bars became a freedom as it helped me focus on what I could do within that space, versus  having the perceived freedom to do everything, which does the opposite to me-blockage.

In the past I have struggled with ‘the harp’s’ identity and my personal artistic direction as I would love to play the harp in a style that relates more to the average person, not the stereotypical,  angelic harp in an orchestra, rather music that is accessible and fun!  Going through this project process helped me to realise that I can create this sort of music on the harp.  Realising that a piece doesn’t have to be perfect or completely prescribed note-for-note on the page was a challenging to accept but once I did the process became easier.

A) Just playing around helped me connect to the fun side of my brain, enabled more creativity and I believe a better piece of music.

B) Also, realising I could play with another musician when the piece or I was not 100% ready or perfect is not only fine but actually a good thing. Kirsten’s suggestions were so helpful and added much more to the piece than I could have created on my own. It was much more fun to go through the process of creating something with another person than me on my own, tearing my hair out! It was certainly encouraging to actually perform or play with other musicians even before I felt ready.  This also lead to me realising that:

C) It confirmed that sometimes you should just act and do things before you feel ready… as you may never feel 100% prepared when you actually already do have the capabilities to do those things you’ve been thinking about doing for so long.

There are elements of the half-baked submission I liked more than my ‘final’ but that’s fine. This  final project helped me achieve my main objective of this course, that was to feel greater confidence to play the Blues (and other forms of music) with other musicians I wanted to allow myself the freedom to go with the flow and play with others and not beat myself up because what I’m playing doesn’t sound perfect or polished.

My main objective of this course, that was to feel greater confidence to play the Blues with other musicians Click To Tweet

Thanks to DHC and fellow students that have been informative, encouraging and supportive throughout the journey.