4 Days Before the Show

My first show of th 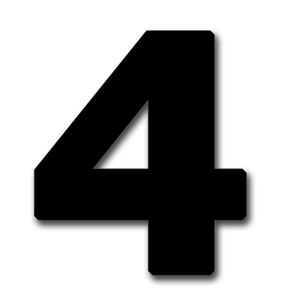 e year – my annual the flow.

So, in a sense, I trick myself so I can stop worrying about what I’m going to play.  This is what my set-list looks like: 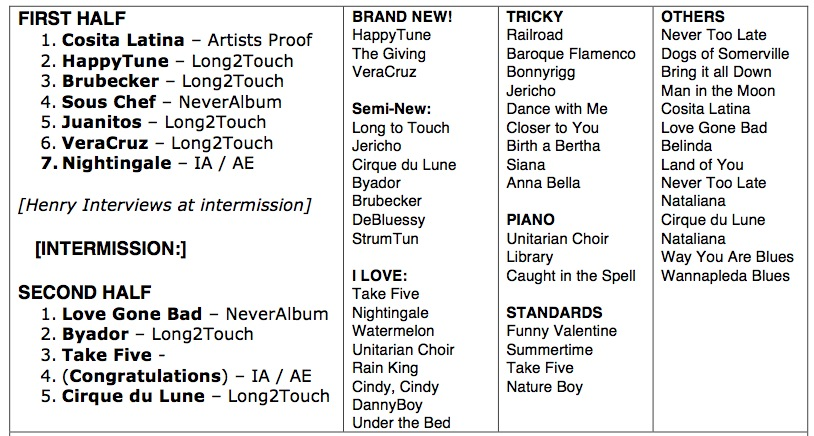 My strategy here is to put what I plan to play on the left, and the tunes I might want to play instead on the right.

Next to the tunes on the left are the names of the albums each song is from, since I always forget to mention that – but in this case it’s mostly irrelevant because nearly everything in the first half is from the album I’m recording now.

The reason it says “Henry Interviews at intermission” right after the first half is that Henry, the videographer, is planning to interview audience members during intermission.  I’m planning to mention it so that people who love being interviewed can look for Henry.

I’ll change this set list 5 or 6 times before Saturday  … and then once the show starts I’ll mostly ignore it.

I’ll also forget to put it on the stage and have to stuff it into my boustier just before I go on. I’ll plan to pull it out right after the first song.  Then I’ll forget, and by the time I remember, it’ll be soggy.  That’s why I print it on a laserprinter and not an inkjet.

Except when I don’t.

I realized today that I totally forgot to send out the posters to the venue.  It’s been a crazy season.  I just forgot.  Not only that, I forgot to even have them printed.

Does it matter?  I don’t know.  I love my posters so I’d love to see the up around Natick and I keep thinking of ways I might be able to get them there, even at the last minute.

But sometimes the greatest, most fun, most powerful things happen because what you meant to do doesn’t happen.

So tonight I made a Facebook Ad.  Not my area of genius. But I did it and if I’d remembered the posters I might not have even tried.  And it was great to do.  Because what I wanted to do was to try to create one tiny little experience of the show in Facebook Ad form.

Did I succeed?  No idea.  But what I loved was trying to figure out how to do it.  Trying to figure out what really makes this live show meaningful.  What people say about the show to me afterwards. The reason they keep coming back.

So I just grabbed those words:  Energy. Music. Story.  Funny.  Moving. And  I tried to find images that went with them.

Of course, as soon as I hit the Facebook “Ad Builder” everything changed – I had to contend with the technology and the interface.  But that’s art.  The medium always redefines the message.

And this all leads to why I love to perform live in the first place.  It IS my medium. It’s always been my medium, since I was a kid. There’s no negotiation, no ‘Show Builder” app I have to contend with, no mysterious icons I need to decipher. It’s me doing what’s always been the easiest, most natural thing in the world to do: sing and play music, tell the stories behind them.

I grabbed the words: Energy. Music. Story. Funny. Moving. And tried to find images for them. Click To Tweet

That’s me speaking my native tongue in my natural habitat.

And THAT’S where I want to be with you — in my natural habitat. Saturday night, Jan. 9th at the Center for Arts in Natick.  So Buy Tix here.

If you live way beyond the Boston Area, join my “Artist Guest List” for the Livestream and I’ll tell you how to watch it on your computer anywhere in the world.  And tomorrow … is day 3 in the countdown.  Time to get my tech together. Stay tuned.