My bio for the Sensoria Festival program

On April 11th I’m performing at Sensoria: A Celebration of Literature & the Arts.  I’m excited about this performance because of all the collaboration that’s developed around it.  Why do I love that?  It provides me a chance to collaborate, to engage with the artistic community in Charlotte, NC and at CPCC where Sensoria was born.

I’ll be working with both the dance and music departments of CPCC, with the Bechtler Chamber Ensemble and with conductor Alan Yamamoto – for a reunion with one of the first conductors I ever worked with.  Here’s a sneak peek at what Sensoria audiences will find in their program:

Deborah Henson-Conant, known as “DHC,” is a Grammy-nominated electric harp virtuoso with a wicked sense of humor, a gutsy set of vocal chords and a theatrical flair.

Her decades-long career as composer, performer and creative coach, is one of constant invention and reinvention, of collaboration with symphonies, philanthropists, manufacturers and theaters to create new works, new instruments and a new breed of performers.

A fiercely independent innovator, she’s created her own path, composing musical theater since the age of 12, learning classical harp in her early 20’s, leaving classical harp to become the world’s pre-eminant jazz harpist in her 30’s, composing and performing alternative harp concertos in her 40’s – and finally synthesizing virtuosity, improvisation and story into her own genre of impassioned original solo musical theater.

As an instrumentalist, she’s brought the harp from the background and put it front and center. The New York Times credits her with “reshaping the serenely Olympian harp into a jazz instrument” – and in fact she literally reshaped the instrument, working with the world’s most cutting edge harp builder, CAMAC Harps, to shrink the 6-foot concert harp into the instrument you’ll see on stage tonight: a 32-string electric ‘body harp’ made completely of carbon fibre, that she wears via harness. Originally developed as her signature instrument, it’s now the world’s top selling electric harp, and named after her, the “DHC-Light.”

As a composer, she’s created concert, symphonic and music-theater works, from serious chamber operas and song cycles, to flamenco-inspired concertos and fantasies.  Her musical “The Golden Cage” is scheduled for a NYC reading just a week after her Sensoria concert; her one-woman children’s musical, “The Frog Princess” was featured at the Kennedy Center and the Chicago Humanities festival, and her concertos “Baroque Flamenco” and “Soñando en Español” are performed by harpists and orchestras throughout the world.  One of the pieces you’ll hear tonight is a chamber music version of “Baroque Flamenco;” originally composed for classical concert harp, tonight is first time it will ever have been performed in a chamber music setting with the new  “DHC-Light” electric harp.

You’ll also hear excerpts from two of her one-woman musicals.  One is from “What the Hell are You Doing in the Waiting Room for Heaven?” a show that explores Life as the ultimate reality game show, with a harp-toting casting coach who trains the deceased to win auditions for the Heavenly Choir.  You’ll also hear an excerpt from “Electra’s Lyre,” the story of an ancient Greek princess who struggles to reinvent her violent past by time-traveling to the authors and thinkers  – like Freud and Jung – who used her story in their own work.

In 2005 Henson-Conant received a major private grant to develop “Invention & Alchemy,” a series of her original symphonic stories featuring harp, voice and orchestra – some of which you’ll hear in their chamber ensemble versions on tonight’s program.  Filmed and recorded with full symphony orchestra, in 2006 the CD received a Grammy Nomination. A year later, the DVD was developed into an hour-long music special which appeared on PBS Stations throughout the U.S.

As a collaborator she’s worked with symphonies, soloists and even scientists in her creative series “Inviting Invention” that invites unlikely collaborators to invent new works on the spot, in front of an audience.  She’s improvised with musicians from Bobby McFerrin, to Steven Tyler, with classical guitarists Sharon Isbin and Mason Williams – and with symphonies and chamber ensembles throughout the US & Europe.

In 2012 she fulfilled a lifelong dream of joining a rock band when guitar legend Steve Vai invited her on his world tour, “Story of Light,” and became her rock mentor, guiding her to reinvent guitar and keyboard riffs that have never before been played on a harp.  You can see her jamming with Vai and others in the videos on her website, HipHarp.com.

In 2013 DHC began developing an online curriculum for musicians that combines improvisation, jazz, and entrepreneurial skills.  Since then, nearly 2,000 students from over 25 countries have gone through her online curriculum, and in 2016 she debuted a year-long mentorship program, “Harness your Muse,” that helps soloists develop, produce and market their own original shows by combining music, theater, media and audience interaction.

She’s released over a dozen albums, composed nearly 50 symphonic works and performed internationally for nearly three decades.  Her next solo album is scheduled for release this fall  – and tonight’s program includes a peak at one of the new cuts.

DHC’s work is always an exploration of the place where story meets music in both her original stories and those she’s reinvented – and she was thrilled to be featured at Sensoria and have the chance to collaborate with both the dance and music departments at CCPC, as well as with maestro Yamamoto and the Bechtler chamber ensemble for tonight’s concert.  You can learn more about DHC at her website DeborahHensonConant.com or HipHarp.com.

Want to go to the show?  Here are the details! 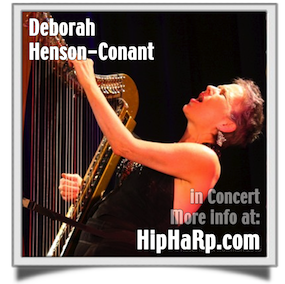 Want to know more about DHC?