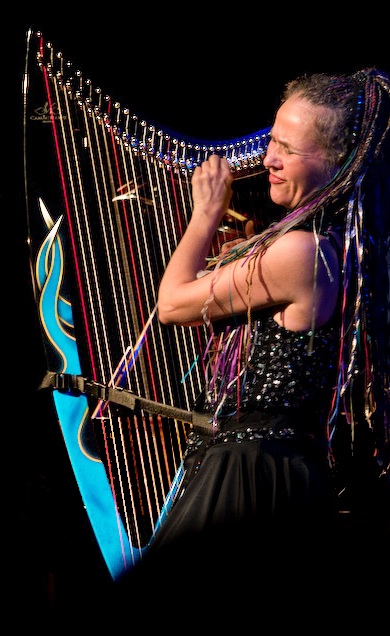 Read the full release, including info on the special Hands-On Arranging Workshop for Musicians Tue. Mar. 29 from 7-10pm

She strides onto stage like a rock-star, with an electric blue triangle wired with 32 multi-color strings. She plays, she sings, she tells tall tales about her life. She’s the harpist your parents never warned you about: the electric harpist.

Henson-Conant is a one-woman orchestra, using a “looper-pedal” to layer sounds from her harp in real time, then weaving solo lines and vocals above it. Forget the demure harpist – Henson-Conant is a showman, entertainer and solid musician who’s been compared to artist-performers from Leonard Bernstein to Elvis Presley and Van Halen.  She’s been featured on CBS Sunday Morning, The Today Show and NPRs Weekend Edition, and has starred in two full-length PBS music specials.

Her signature instrument was invented and named for her (the “DHC Blue-Light”). It weighs 11 lbs, has 32 strings and is made of carbon fibre. Created for her by the CAMAC Harp Company in France, it’s now one of the fastest-selling new harp models in the world.

Henson-Conant’s voice is compared to Carly Simon and Joan Baez; her playing to Chuck Berry and Jimi Hendrix; and her humor to musical comedian Victor Borge. The shows are tied together by powerful, funny, affirming stories and universal humor. Her website, HipHarp.com and YouTube channel, YouTube.com/HipHarpist give a good overview of what you can expect at the show.