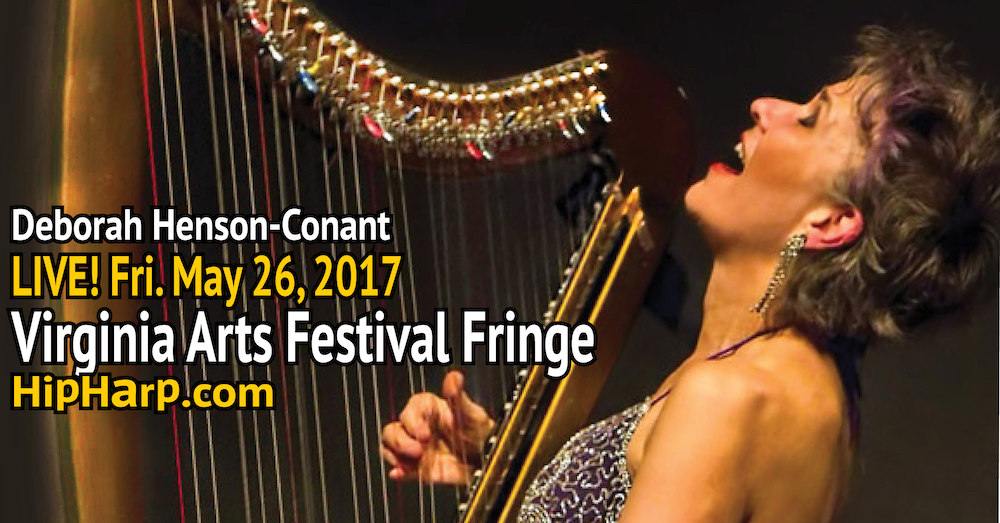 I’m excited about my performance at the new Virginia Arts Festival Fringe this weekend.  I thought you might enjoy seeing the program bio so …

This Grammy-nominated electric harp virtuoso has a wicked sense of humor, a gutsy voice, and theatrical flair to spare, whether she’s playing classics, covering rock classics, crooning and plucking the blues, or serving up sizzling flamenco. Discover “dazzling harp playing, gorgeous jazz/pop singing, comic timing and impressive songwriting” (Austin American-Statesman) in this Fringe show at the Virginia Arts Festival. See her once and you’ll never look at the harp the same again!

Deborah Henson-Conant (“DHC”) is a Grammy-Nominated composer-performer and the world’s premiere electric harpist.

She sings, plays and tells stories in shows that combine styles from Flamenco to Blues – and creates a one-woman orchestra using a 32-string electric body-harp, her voice and a foot-controlled loop pedal. Her work combines musical virtuosity with unlikely stories, to create her own genre of impassioned original solo musical theater – which she performs strapped to her harp like a musical Centaur.

DHC is known as a pioneer –  one of the only woman instrumentalists in the Contemporary Jazz movement of the 80’s – and a fiercely independent innovator whom the New York Times credits with “reshaping the serenely Olympian harp into a jazz instrument.”

Her decades-long career is one of constant invention and reinvention.  She’s released over a dozen albums, composed nearly 50 symphonic works, performed her one-woman shows internationally  and created the world’s first Online Alternative-Harp study program at HipHarpAcademy.com.

She’s debuted her orginal orchestral and chamber works with symphonies and chamber ensembles Internationally, toured as a rock-harpist with guitar legend Steve Vai,  opened for Ray Charles at Tanglewood, been featured in media from Charlie Rose, and NPR’s Scott Simon, to her own music special on PBS.  She’s improvised on-and-offstage with musicians like Bobby McFerrin, Aerosmith’s Steven Tyler, classical guitarists Sharon Isbin and Mason Williams. Learn more at her website: HipHarp.com

HER INSTRUMENT is the “DHC” 32-string body-harp, a 11-lb carbon-fibre electro-harp designed in collaboration with the CAMAC harp company, specifically for her shows. The “DHC” harp has a piezo pickup on each string and she wears it via a harness she designed.  She runs it through a looper pedal to created looped soundscapes and rhythm-scapes in real time.

She strides on stage like a rock-star, wearing an instrument that looks like it levitated off the Star Trek set.  She sings. She pulls melody, chords, bass lines, percussion and rhythms from her 32 strings – then loops them in real-time, right in front of the audience, with a looper pedal – creating soundscapes and rhythmic grooves she improvises over.   She  uses spoken word and story to riff over the music ’til you can’t tell where the speaking stops and the music starts.

When you leave the show you know you’ve experienced something you’ve never even imagined –  and it was funny, deep, impressive, inspiring –  it makes you question everything you thought was impossible in your own life.

“Singing up a Storm” Boston Globe

“She may look like an angel, but she’s plays devilishly well.” Joan Rivers

Inside Brubecker – This video shows how DHC uses a looper to weave tracks together in her tune “Brubecker” inspired by David Brubeck. Share it here: https://youtu.be/ppeNsvMud6g

About the Norfolk Fringe:

Memorial Day Weekend is the Virginia Arts Festival’s Norfolk Fringe! Catch a world premiere opera that gender switches roles and dares you to guess who’s real and who’s ghostly. Take a break from fake news and get to giggling over fake Shakespeare. Discover an astonishingly gifted 13-year-old jazz pianist, hear a one-man-band, and smash a musical barrier with a hip-harp show…..mind-blowing performances to choose from, at ticket prices that make it possible to load your cart with arts and entertainment all weekend long!