I’m writing from  France – in a tiny hotel room, in a small harbor town called Paimpol, which is on the coast of Brittany — which is the Celtic region of France.

Here’s  a 2-minute video of my first day in Paimpol (not to be confused with the last days of Pompeii), in which you can admire my cutting-edge sideways video technique.

For anyone who thinks all France is “French” – Brittany is fiercely, proudly Celtic,with its own native Breton language, music, dancing, food, instruments and funny hats (ever notice how important headwear can be in cultural identification? Hmmm … which means, I guess, that I have my own personal culture).  Below is a photo of the traditional Breton headdress. And now you know where I got the idea for my own hairstyle. 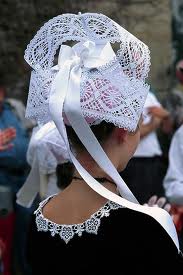 Fortunately, the people here also speak French, so we can misunderstand each other quite fluently.

This town, Paimpol, is deeply proud of its relationship to the sea. Outside my hotel is a harbor full of boats and yesterday, on my run, I discovered another harbor. Or … well, it was a curvy place where the water lops over the land, with boats leaning around in the sand, so – that’s a harbor, right? I mean a harbor when the tide’s out.

I’ve been told this festival was originally called “Festival du Chant de Marin” — meaning, “Festival of Sailor Songs” — which is why I’m here playing my father’s banjo, since he was in the Navy in WWII and an avid singer.

So … this festival started out ten years ago as a festival of the songs of sailors, but things changed and now it’s called “Festival du Chant de marin et des musiques des mers du monde” — meaning “Festival of Sailor Songs and the Music of the Seas of the World.” You can’t get much more inclusive than that – plus I am partial to anywhere with a name longer than mine, as it makes me feel positively pithy. Which, obviously, I’m not.

So the point I’m trying to get to (did I tell you I’m a little jet-lagged?) is that the focus of this year’s festival is “Celtic Lands” – and no, I’d never call myself a Celtic musician – but my harp – the electric harp that the CAMAC company invented, designed and built for me  was built right here in Brittany, in a town called Nantes. Which means this harp is a perfect example of a Breton sailor who – having traveled off to parts unknown – has now returned to tell the tales of its adventures in song. You see?  We fit here perfectly.

(… and now let’s go back to that enewsletter and check out the Shameless Barn Plug to fill the last remaining spot in my summer intensive next week!)