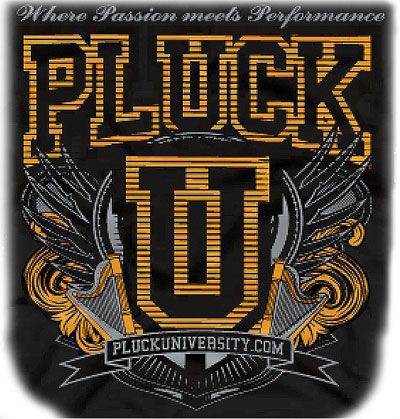 The "Pluck U" T-Shirt Design

Electric Harp Pioneer Trains a new Generation of Rockin’ Harpists – whether you play harp or not!

Sound esoteric?  Well, it is … and it isn’t. Deborah Henson-Conant is ‘THE’ “DHC” behind the world’s fastest-selling electric harp.    Henson-Conant has collaborated with the CAMAC Harp company in France for nearly two decades to develop revolutionary harness-style harps, and now CAMAC has come out with it’s newest carbon-fibre model, and named it after this Boston-area electric harp pioneer, calling it the “DHC Light” the elite racing-bike of the harp world.

In fact, the CAMAC company used racing-bike technology to craft the carbon fibre body of this unusual instrument.

Weighing in at 11 pounds, it’s about a 7th of the size and weight of the 6-foot tall, 75-pound concert harp Henson-Conant played when she got her start as a jazz harpist in the Boston area in the late ’80’s. She went on to sign with one of the counry’s top jazz labels, GRP, and later received a Grammy Nomination for her independent CD, “Invention & Alchemy,” but has continued to make the Boston-area her home.

Now she’s developing a training program for electric harp and is collaborating with the Regent Theatre and the Ultra-Sonic Rock Orchestra to present the first pilot project for that training on Sun. Nov. 6th, in an event called “Pluck University.”

“Hey, I strap this thing on every day and create sounds that make people’s jaws drop, on an instrument that’s like nothing they’ve never seen before,” says Henson-Conant.  “To me it’s an everyday thing. But it’s truly an incredible experience – and I want to give other people the chance to experience that too, because they can!   Unlike the violin or the clarinet, you can actually make great sounds on a harp from the first pluck — and that experience is liberating and inspiring, whether you’re a musician or not. I think of it like a cross between test-driving a new Ferrari and bungee-jumping — you know, both scary and elating — a fantasy-experience to shift you into a new sense of what’s possible”

This unusual training is open to musicians and non-musicians alike and is a chance for people to literally strap on her unique instrument and see what it’s like to strut across the stage with it, bend notes, and give a try at the kind of signature harp ‘wailing’ that has made Henson-Conant a pioneer player. She’s currently the only person in the world to own 3 of these instruments – and all 3 will be with her at the Regent Theatre at the launch of “Pluck U” on Sun. Nov. 6.

The Sunday evening event kicks off a week of open rehearsals that culminate in Henson-Conant’s birthday concert celebration on her birthday, “11-11-11,” Friday Nov. 11th at 8pm.