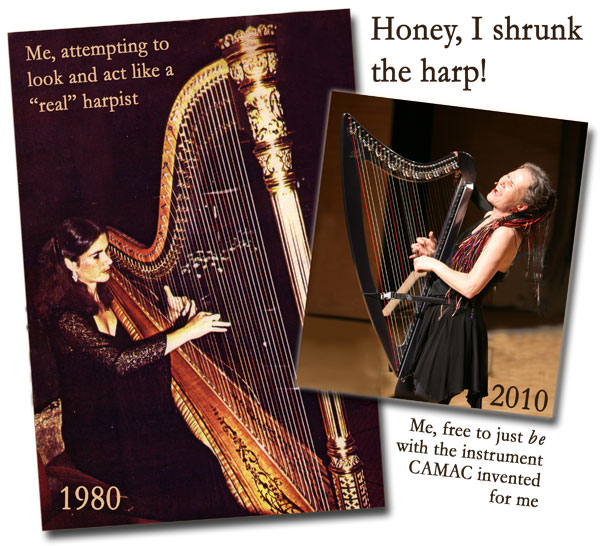 There’s a new breakthrough technology coming to Seattle in June. Like many successful hardware devices, this one’s built to interface with the human hand. Likewise, the newest version is both smaller and more powerful than previous models. But it’s not an iPhone, an iPod or even an iPad. It’s a harp.

Grammy nominated composer, vocalist and harpist Deborah Henson-Conant is the world’s premiere electric harpist, and she’s been so instrumental in the development of this new hybrid that the latest model on the international scene is named after her: the “DHC-Blue-Light” – designed and built in France by CAMAC Harps.

“It’s taken nearly two decades to develop this instrument,” says Henson-Conant, who features the harnessable carbon-fibre instrument in a solo show Sun. Jun. 20 at Seattle’s ‘Triple Door.’ “My concept was to take everything great about the concert harp and put it in an interface that’s more like electric guitar. The CAMAC company developed this harp specifically for my shows, performances that combine theater, music, movement and stories in a solo format – a kind of high-energy individual Nouvelle-Cabaret that requires a lot of physical freedom, and a sound that can range convincingly from ethereal ballads to all-out distorted Blues.”

“I think of it as spectacle-of-imagination, since this style of performing relies on one person, a single instrument, and some very obvious effects – rather than sets, lights, costumes and a lot of technology – to generate the sense of ‘bigger than life.’ That’s just my personal ethic. I love moving in and out of the sphere of imagination, and to be constantly shifting the audience with me.”

One of the few technical effects Henson-Conant uses is a loop-pedal, which lets her orchestrate layered accompaniments on the fly. “With these two instruments – the harp and the looper — I can create the impression of a full ensemble – but because I’m solo, I’m completely free to respond artistically, to change the show spontaneously. And because of its size and weight (the harp weighs only 11 pounds), it makes touring much easier.”

Touring is a big part of Henson-Conant’s life. In the past year, she’s been half-way around the world, to New Caledonia, as well as to Europe, and throughout the U.S. where she performs both as a solo artist and as visiting soloist with symphonies.

Her shows rely heavily on original music. (“It’s not like there’s music already written for this instrument,” she says.) And her style spawns storyscapes that range through musical styles like actors pawing through a costume box. Flamenco dramatizes a story of time travel in “Baroque Flamenco”, Blues underscores the equation of bad food to moldy relationships in “Love Gone Bad,” a brooding Celtic reel explodes into found-sound in “Cirque du Lune” and in “Watermelon Boogie” she explores the sexy side of her favorite food, and poses the idea that these vine-growers invented the World Wide Web.

“Reshaping the serenely Olympian harp into
a jazz instrument by warping it closer
to the Blues.” New York Times

BRIEF ARTIST BIO:
Deborah Henson-Conant is a Grammy-Nominated composer-performer and the world’s premiere electric harpist. She sings, plays and tells stories in Nouvelle-Cabaret shows that combine styles from Flamenco to Blues. She’s toured internationally, debuted with the Boston Pops, opened for Ray Charles at Tanglewood, jammed onstage with Bobby McFerrin and offstage with Aerosmith’s Steven Tyler, and starred in her own music special on PBS, “Invention & Alchemy.” She’s been featured on shows from CBS’ “Sunday Morning” and NBC’s “Today Show” to NPR’s “Weekend Edition” and the Food Network’s “Unwrapped,” and interviewed by hosts and journalists from Scott Simon, Susan Stamberg and Studs Terkel to Charlie Rose and Joan Rivers