It was an experiment.  And what I discovered was …

He’s my muse.  Thinking of him, playing for him, I was able to do what I hadn’t been able to do for 7 years, which was release newly recorded music. 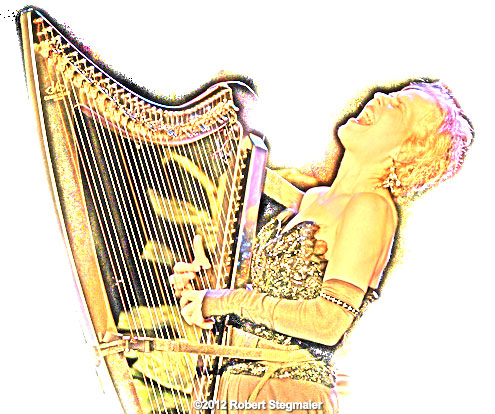 I sent them to him as a valentine, then released them as a limited edition digital collection.

I called it “Love Songs for Peter” since that’s what it is.  And it’s my first musical experiment of 2013: a short collection of jazz-harp love songs — jazz standards, I knew he’d love: As Time Goes By, Charade, The Days of Wine and Roses, My Funny Valentine

Why it’s taken me so long to record something new is fodder for another blog. This release – musically – is a tiny thing – just a first step.

The big thing was release from the prison of my own mind.

At different times of my life I’ve had different muses.  Some challenged me, some gave me safety, but all did one thing: released me from my own judgment of myself long enough to create a connection.

Release to connect more deeply, to say more emphatically what I think every day: “I love you.”  Words that can feel pale.

A muse channels the feeling those words only point to, but can’t reach – channels them into art. In this case, a recording.

With Peter, the power of his muse is safety.  I know he’s not critiquing my work,  just listening for the love, so that’s all I have to focus on: how to put as much love as possible into what I play.

And that released me from the straightjacket of my own perfectionism – not completely – but enough to get the music out, to reach to him with it, to make the connection.

And to share that with others who also want to hear the love.