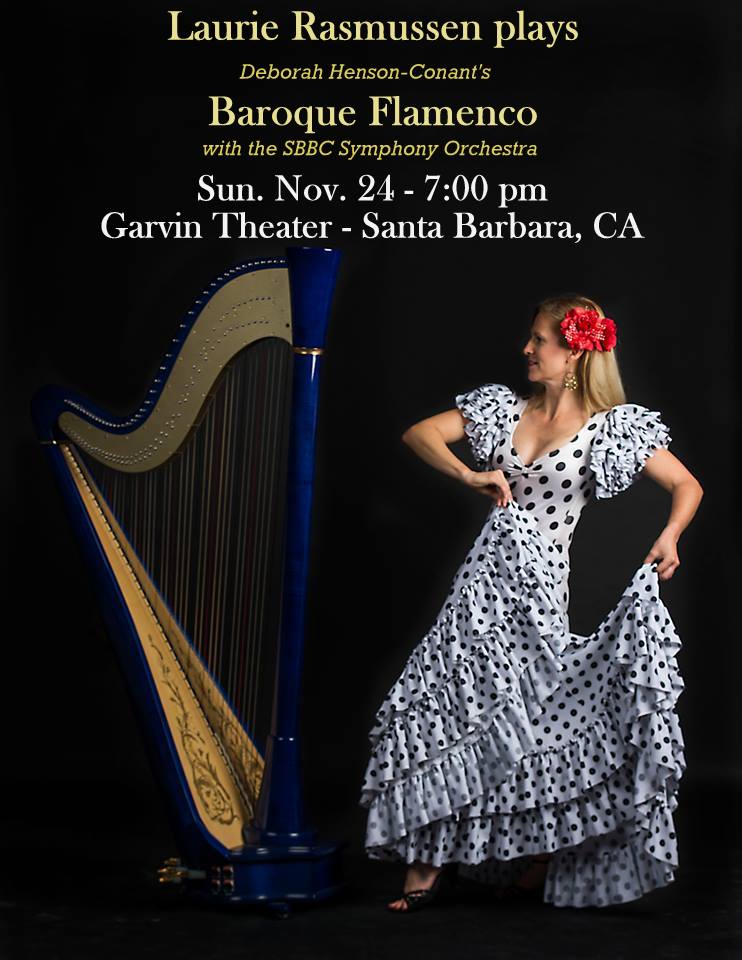 The orchestra will be led by James Mooy. Also on the program: Festive Overture by Dmitri Shostakovich, Knoxville: Summer of 1915 by Samuel Barber and Howard Hanson’s Symphony No. 2 “Romantic”

A few words from the Composer:

“When I saw Laurie’s photo with the harp, I remembered that CAMAC added the 4th soundboard pickup to that harp because of “Baroque Flamenco” – I’d been beta-testing the harp on tour in Germany at the same time I was developing the piece, and they’d isolated the soundboard sound from the pickups to the extent that audiences couldn’t even hear the percussive part of the cadenza (one of those cases where improvements in harp technology undermine my own innovations)! I’d added a soundboard pickup to the harp, and when Joel Garnier saw what I’d done, he installed it permanently on the whole line of harp models from there forward. So Laurie’s performance is part of the legacy of that harp.

I so wish I could be there on Sunday, and I look forward to seeing the video!”

A few words from the Performer:

“Tonight we had our first rehearsal in the theatre and it was fantastic! I bought that Camac Blue harp a year ago but I’ve never had it plugged into the house like this and it is a TOTAL POWER TRIP!!!!

I’d been working on the harp solo version of Baroque Flamenco last year and a few orchestra members had heard me playing it. They asked if we could do something like that with orchestra and then one thing led to another. I’m so very happy they got on board and that they love playing this piece because for me it’s like surfing a big wave of joyous passionate energy. So much fun!”

A few words about the beautiful poster photo:

“There’s a prestigious school of photography here in Santa Barbara, the Brooks Institute. Every semester the classes get an assignment to find a musician and shoot them doing their thing. Last week I received an email request from a student (Iris Minji Kim) who included a link to her online portfolio and I liked her photos. I told her I’d be happy to sit for her assignment shots but that I had another idea in mind and she agreed. The flamenco shots came from that session and I’m really thrilled with them. They captured the movement, flavor and interaction with the harp that I was imagining. The beautiful symmetry of composition was just a happy accident!”