The OTHER Playoff – Saturday Jan. 11 on Boston Turf

The Colts and the Patriots aren’t the only ones playing Boston turf Saturday night!  If you’re not a football fan, I invite you to watch the OTHER playoff – my “Lose Your Blues” show LIVE at The Center for Arts in Natick (TCAN) – or from your computer, like a fly-on-the-wall via ConcertWindow (a cool pay-what-you-want concert livestreaming platform). 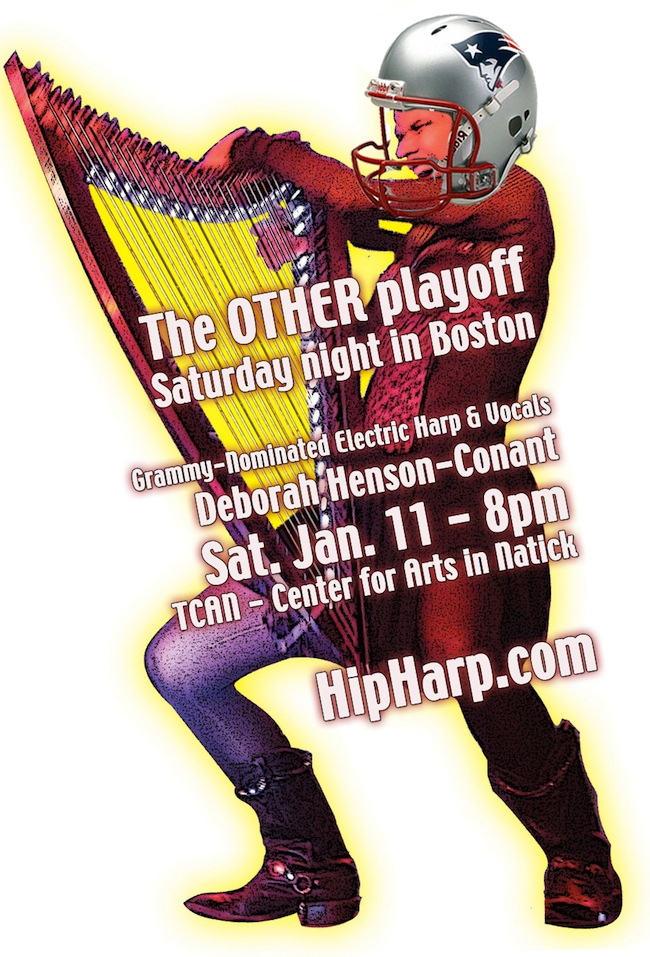 Over the years I’ve been compared to a lot of people – singers, comedians, ballet dancers … and, yes, sports heroes.  It’s not that I really DO those things – it’s just that it’s really hard to describe what I DO do on stage and there’s a strong scent of each of those in how I see the world …

To those journalists who have compared me to sports heroes – thank you for fulfilling the dreams of a girl who could barely get around the track in high school.

This was my favorite of all time:

“Calling Henson-Conant a harpist is like referring to Joe DiMaggio as a guy with a bat.  Technically, it’s accurate, but you’re just scratching the surface.”  Jeff  Kaczmarczyk Grand Rapids Press

No, it ain’t football … but it sure feels good.

“How’d it go???” you ask! WELLL here is a note from DHC AFTER the age-old battle: SPORTS versus ART

What do you do when the night of your show turns out to be one of the hugest nights for Sports Fans? Normally you just pack it in and expect a small turnout.
But last Saturday when the Colts and The Patriots battled it out in THE playoff — I staged my OWN playoff to a packed house that — to my surprise — even included some football fans!

How do I know?? Well, during a sing-out at the end of “Dogs of Somerville” Blues, when I called for Football Fans to sing a line – I heard a lusty chorus of voices.

“Wow! That was unexpected, thought I … I wonder if this graphic I’d posted on Pinterest & Facebook had lured any of them to the show …”

On the other hand, two seconds later when I called for NON-Football fans to sing, the decibel level nearly blew me off the stage.

Glad I could provide an alternate playoff!

(Want to see Deborah fight for the arts on a stage near you? Check out the Tour Page!)