“Flute and Harp for Christmas” – musical snobbery gets a come-uppance

[UPDATE: I originally wrote this blog in 2010. Now you can hear the whole album for free and then buy it as a download here] 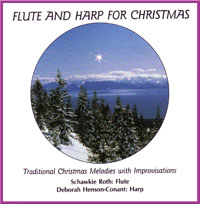 In the mid-’80’s, when I still played a big acoustic concert harp, a quiet-spoken flutist called one day and asked me to improvise a meditation recording with him.

He said his name was Schawkie Roth. (“Give me a break,” I thought. “‘Schawkie Roth??? What? Some Jewish kid makes up a wacky first name to sound mystical?”) I was a musical snob so I told him to go work with someone else.

But he came back — again and again. And finally he wore me down. So I agreed to one recording.

For payment, he offered me either a modest fee or an honorarium plus royalty on each album. He tried to convince me the smaller fee and royalty was a better deal, but I scoffed and went for the sure money.

The cuts were all improvised, either on themes or on ideas, and he wanted me to play in what I considered a very ‘harpistic’ style — exactly the style I was trying to move away from. I made sure he knew I wasn’t really that  kind of harpist — but the truth was that, when I let down my facade, I really enjoyed the relaxed playfulness and collaboration of working with Schawkie.

Schawkie was one of the first new age instrumentalists on the scene (I don’t even think the term “New Age” existed then), and the first independent musician/entreprenuer I ever met. As a business-person, Schawkie’s unique – for example, he’s always insisted that any contract fit on a single page and be written in plain English. 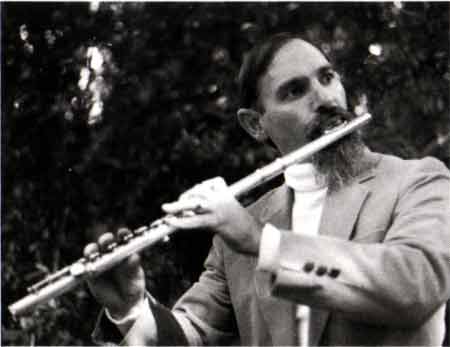 He’s is exactly the person his music paints him to be: deeply spiritual, impeccably honest, and very straightforward. ??As it turns out, the album we recorded, “You Are the Ocean” became something of an early New Age hit and if I’d gone for the modest fee and percentage I would have seen more money than I ever had to that point in my life as a musician.

That’s the price of being the hipper-than-thou snob that I was.

On the next album Schawkie let me change my deal, with only the tiniest “I told you so” giggle.  We made three more recordings, culminating in a beautiful album of flute/harp improvisations on Christmas Carols called, “Flute & Harp for Christmas.”

So, fast forward a couple of decades — in 2009 I joined “Topspin Media,” giving me the ability to sell digital download collections Direct-to-Fans, I knew I wanted to offer “Flute and Harp for Christmas.”

So now, after years of being essentially out of print, I’m proud to offer the digital download collection of “Flute & Harp for Christmas” — separately or bundled together with my own solo holiday album “The Gift.”

It’s great to know this album can have a new digital life. And it’s really fun to hear the cuts again – and especially fun to compare the same tunes between the album I made with Schawkie and my solo album (check out the difference between each album’s version of “God Rest Ye Merry Gentlemen” – and you’ll hear a slice of my metamorphosis as a player within a few seconds).

And by the way — I was wrong on all counts. The name Schawkie –well, I recently asked him to remind me how that came about.  Here’s what he wrote:

“We recorded this album at the same time we did HYMNS FOR ALL SEASONS (all hymns), and you suggested that we make an album of just Christmas traditional hymns, so I said, show me what you do and how you improvise on traditional Christmas music, and you did, and it just blew my mind how loose and free you got on arranging and improvising on these tunes, so you just wrote out a few intros, we rehearsed some sections for improvisation and some of the tunes, and BOOM in two days the album was recorded and shortly afterwards mixed and mastered along with HYMNS FOR ALL SEASONS. ??You joked it should be titled “HERS FOR ALL SEASONS” instead of “HYMNS…”

“…Anyway, this was around 1986-1987, and it was around the time of I saw harp players like you and Joel Andrews as “ANGELS”  YEA!  ANGELS!!!! So we played these hymns like we were channeling the angels in heaven–oh it’s so corny– but it was fun and EFFORTLESS… 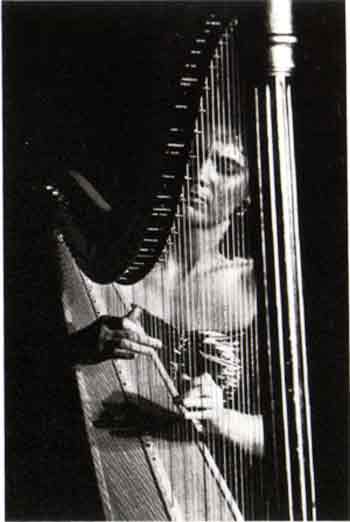 “And together with YOU ARE THE OCEAN I and II I was able to save up enough money while raising Maelani (born in 1983) to buy my home in Woodacre, which was the best investment of my life, other than creating music recordings.

“Furthermore, sweet Deborah, all three recordings should eventually be made available to your fans, because there are no others like them and you shine equally in all three albums.  So, think about that.

“Since I’m not so much into technology as a marketing passion, these great albums could sink into the closet of obscurity...so, if someone out there actually HEARS a piece of music with total focused absorption, and is TRANSPORTED, then the music lives, and , if not, back to the closet, baby, for another hundred years…??”

One other thing Schawkie taught me:  don’t be a musical snob.  These albums I made with him are beautiful, totally different from anything else I’ve ever done, and after nearly 25 years it’s wonderful to be able to be able to offer them again in a format – digital downloads – that we couldn’t even conceive of when we first sat down to record them.