This post instigated by a 3-hour she has shiny boots.”

My boots have become my hair.

I didn’t realize that was happening.  I thought that my hair was the only cool thing I would ever have, and when I cut it off, I thought my days of people walking up to me and commenting on how I look were over.

For fifteen years my hair was in long colorful box braids.  My hair became my signature self.

It was all completely fake – I braided hair extensions and ribbons – purple, red, gold, blue – into my own shoulder-length, flacid, nondescript ‘real’ hair.  Within 6 hours I was  flamingly cool.  Having been uncool for the previous 40 years. 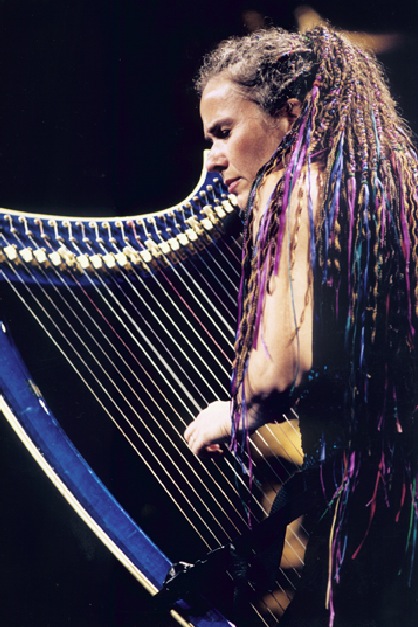 People would stop me and say, “I love your hair,” and they would touch me.

Ambassadors would touch me, and ladies cleaning airport bathrooms would touch me. They would reach out and take a handful of those strands, and feel the texture, as if my hair were a flower, or a dream, or chains of gold  in a treasure-chest.

And it was fine.

I love that strangers touched me with this childlike delight. That my hair made them forget it was impolite.  And so it became a simple, genuine, spontaneous act of human connection.

And then, one thanksgiving I cut it all off.  You’d think it was brave, but it was – what’s that word – the guy who looked in the water and fell in?

Oh right … Narcissistic. My marvelous braids were pulling out my un-marvelous hair and receding my hairline in unflattering ways. As if there are any flattering ways to recede a hairline.

It was after dinner, when our friends Thomas and Stuart had left. I was sleepy after the meal.  I’d stopped on my way to the bathroom, and leaning against the doorjamb, I glanced at the television where my husband – no, actually, my boyfriend – he’s not my husband – was watching Lady Gaga’s Thanksgiving special.

And I thought suddenly, “I am NOT my hair.”

I walked into the bathroom, pulled out the scissors and cut off the braids one by one. And put them in a ziplock bag.  And then looked at myself in the mirror. It wasn’t the world’s best haircut.  But that’s not what I was thinking.

I was thinking: how do you step forward into your life when you’ve just cut off something that defined you?

I won’t describe all the hats and wigs I bought, hoping to make some kind of  ‘transition’ – and finally gave up and accepted it was over.

… only, apparently  not the end.

Because one day I noticed my boots. Or, I should say that I noticed that other people noticed them.

And here’s the thing. The boots are simply boots.  They’re plain and simple cowboy boots. I bought some silver chaps for them, though, or whatever they’re called.  Like stirrups, but decorative – with shiny silver discs, as if the boots are each wearing a manly bracelet. 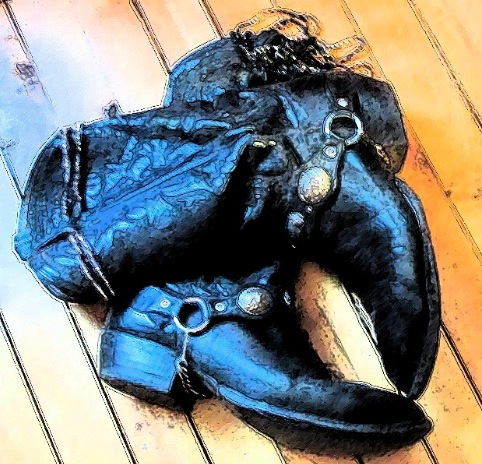 And then there are the necklaces.

I don’t wear necklaces. But I love them.  I love the way they hang, and move. I love the glint and the ever changing sway.

And so I hang them on my boots – I run them through the fingerholes that help you pull the boots on.  Four or five necklaces on each boot.  A silver necklace with stars, elegant simple chains, a string of rhinestones.

And when I wear my boots. I feel powerful. And whimsical.  And people stop me and they say: I love your boots.

And sometimes they touch my shoulder when they say that.

This post was instigated by a 3-hour GrubStreet workshop earlier this week.  I wrote about it here.