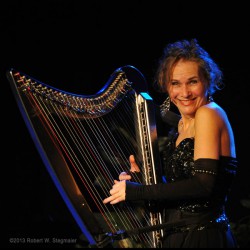 Every year Deborah Henson-Conant (DHC) performs her Annual “Lose Your Blues” concert at TCAN (The Center for Arts in Natick) in the Boston area – a full night of Blues on harp and voice. You could call it a night of Harp and Soul.  But if “Blues Harp” means “harmonica” to you, it’s time to recalibrate your Blues Instrument Settings.  DHC plays a 32-string electric harp she wears via harness.

This year her “Lose Your Blues” show is on Sat. Jan. 10th.  The impetus is to take one of the worst weekends of the year – right after New Years and see just how much fun she can have with it by playing and singing as many different kinds of Blues as she can on her electric harp. (Details on the show are below).  DHC is known for taking the 6-foot concert harp, shrinking it to the size of an electric guitar, strapping it on and playing music from Flamenco to Blues – and in this show she focuses on the Blues.

“I love taking something that’s limited in some way and exploring all its possibilities” she said, from her home in Arlington, MA. “That’s how I ended up reinventing the harp itself, and it’s what I love to do with this annual show – take a time of the year when we could easily lapse into depression – the weeks right after New Years – and see how much fun I can have with them.”

Because there’s no tradition of Blues on the instrument, Henson-Conant says she’s never had to break away from the traditional “My Baby Done Left Me” Blues, so people who come to her Sat. Jan. 10th show at TCAN in Natick, MA will hear songs about  Canine Cultural Exchange Programs, the delights of the Watermelon, what to call the graceful act of disengaging manual door locks on old cars, what a modern-day Sancha Panza might sing to her Doña Quixota.

She combines 12-bars Blues with the impressionism of Claude Debussy, and calls that tune “Debluessy.”  She sings about food preparation and love in “Sous Chef Blues” which has been described as one of the world’s most kid-friendly racy songs.  She sings Latin-flavored Blues, Blues about meeting Elvis in Heaven, a Blues about never wanting to play classical music as a kid.

“The Blues is a starting place for endless exploration and experimentation,” she says.   Last year, when she held an impromptu Q&A before the second half of the show, an audience member asked how the levers work on the harp and instead of describing it, she invited him right up on stage to play some Blues with her even though he’d never touched a harp before.

Who IS this woman wearing the harp?? 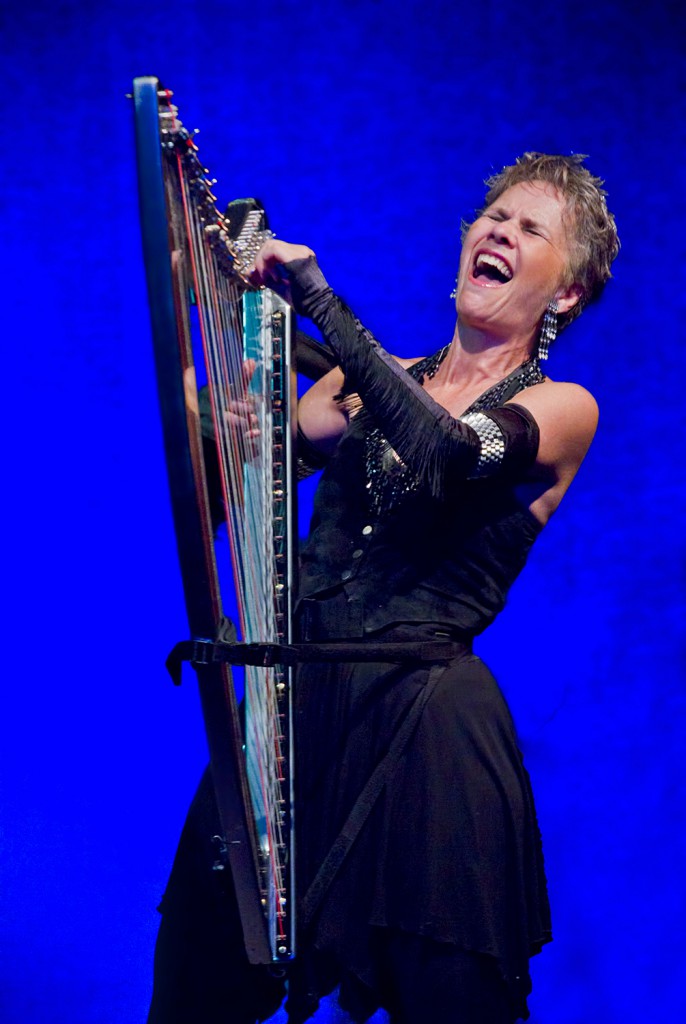 Henson-Conant is a Grammy-Nominated performer, composer and probably the world’s most eclectic harp player.  She performs as soloist with symphonies and in her one-women shows and concerts world wide – and has made her home in the Boston area for the past 30 years.

She dragged her 6-foot concert harp into a Cambridge jazz club in the early 80’s and started a career that includes a slew of awards, touring as a soloist with the Boston Pops, and as a band member with guitar legend Steve Vai, her own music special on PBS, and shows throughout the US and Europe.  Along the way, DHC invented the wearable 32-string electric harp she plays, that’s now designed for her by the French CAMAC company, and is the top-selling electric harness harp in the world.

“There’s really no name for this kind of instrument yet,” she says. “We call it a ‘Body Harp,’ or a ‘Harness Harp’ sometimes.  My original idea was simply to have a harp that was as powerful, flexible and portable as an electric guitar so I could tour easily with it and move around the stage.”

And, like an electric guitar, it’s a great Blues instrument – if you know how to pull the Blues out of it.