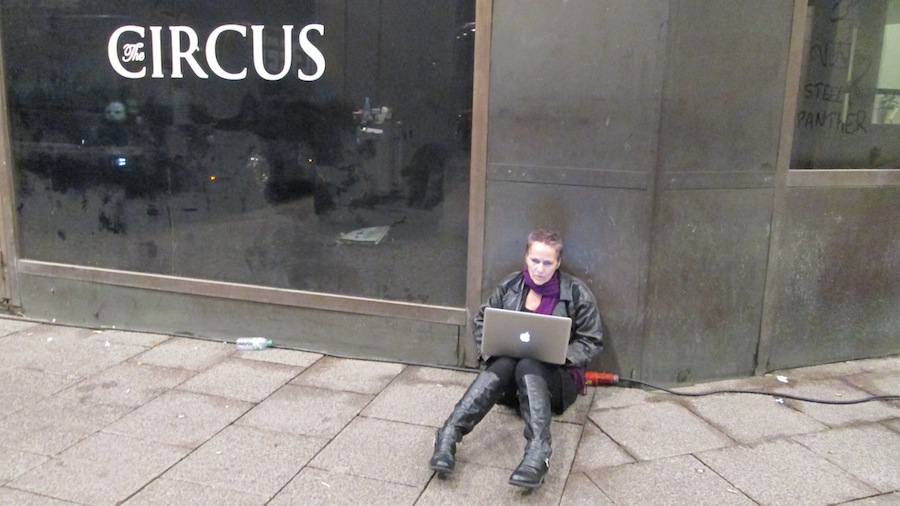 Blogging outside the club at 2AM

I’m sitting on the pavement in an empty courtyard where the tour-busses are parked. I’m outside the bus because I can’t think inside with all the conversations. “The Circus” is the name of the club where we played tonight in Helsinki, Oct. 23rd, 2012.

I’m having one of those moments of mental paralysis.  Today was filled with things I loved and have no photos or recordings of.  So I can’t show … but only tell:

BUILD ME A SONG

During “Build Me a Song” – the section of the show where Steve invites audience members come on stage to help us create a song, there was a young man in a wheelchair who was lifted over the barricade and carried onto stage, followed 30 seconds later by his chair.  When he sang a melody for Steve to play, it was with a high, clear, almost ultra-human pitch, and followed by spectacular, gutteral notes as low, and raw and deep as the desire to speak.  It was as beautiful as raw song – music before it’s codified into melody. 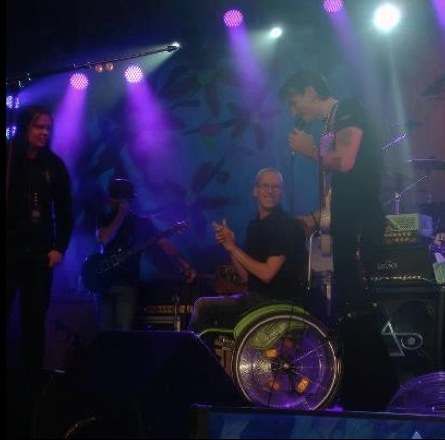 There’s no way to capture that, not even with a photo – and in any case I had no camera onstage.  And now, sitting outside the tour-buses in an empty parking space I have no internet, so I can’t search the web for the photo that surely someone, many people, took of that.

UPDATE! Lauri Malinen’s father just posted this photo to me for this blog!

Then there was my solo moment during Steve’s tour-de-force “Whispering a Prayer.” It’s always delicious to play – this moment that comes-out-of-nowhere, that combines techniques I learned from Debussy and Ravel music with one of Steve’s most beloved melodies, and is the first moment in the show where the sheer sound and energy goes below “overload.”

I’d quote you decibel levels, but I have no idea what they are ‘til then, only that they’re high.

As I began it tonight, the air felt like a perfect, pristine piece of paper, and each note became a single line or point of color on that page.

Every harmonic rang perfectly – something that’s rare because, to play harmonics, you segment the string exactly in the middle with one part of your hand and pluck the note with the thumb of that same hand.  And to play them in that range, I re-angle the harp on my body ‘til it’s almost sideways so my left hand is in position to play them.

At the same time, I’m playing a filigree of accompaniment, like water flowing beneath and around the individual drops of crystal melody, so it feels like juggling to keep the pure, clear sound of the harmonics and support it with the flowing arpeggios.

And tonight each harmonic dropped in near perfection, as if precision was something you could  pull on like a glove – and I had that exquisite feeling of effortlessly speaking music.

It’s amazing when that happens, even in practice, but when it happens as it did tonight, at the one moment when it could be heard – it feels both huge and miraculously tiny.

And even if I had a photo or a recording, it couldn’t capture the experience, the sense of holding something so small in my hands, against thunderous torrents of sound — and the chance to place it on a perfect silence for ears that were listening like thirst.

That’s what I remembered most from today.

I downloaded the photos from today and discovered they were almost all pictures of pancakes.

They appeared at lunch, a huge pile of them, each about 3” in diameter … wait, what’s diameter – if that’s the distance from one edge to the other, then that’s how big they were.  Maybe even just 2”. 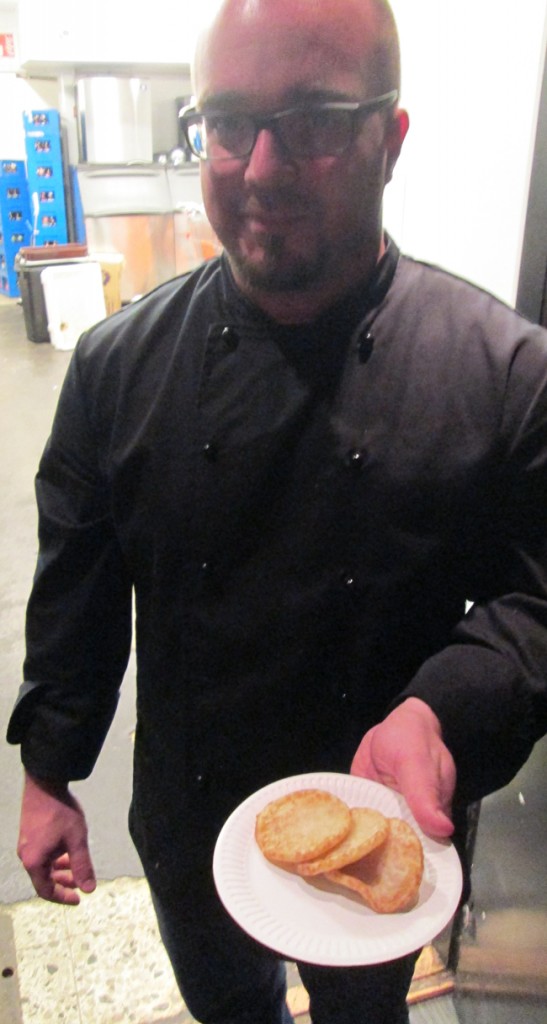 A chef and his pancakes

And it wasn’t until there were only 3 left that I realized I wanted a picture of them.  I ran to find my camera and when I got back … they were gone!!!

I rushed to the chef, who told me they’d been trashed, and I begged him to rescue them for me.

Bless him, he did.

As you see, at right.

But I really thought they deserved a closeup 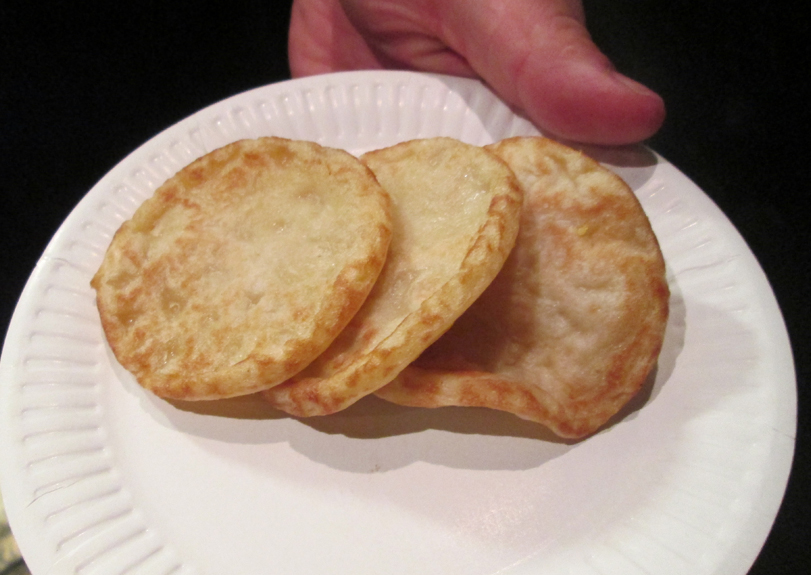 And maybe something gracious with an orange-flavored background… 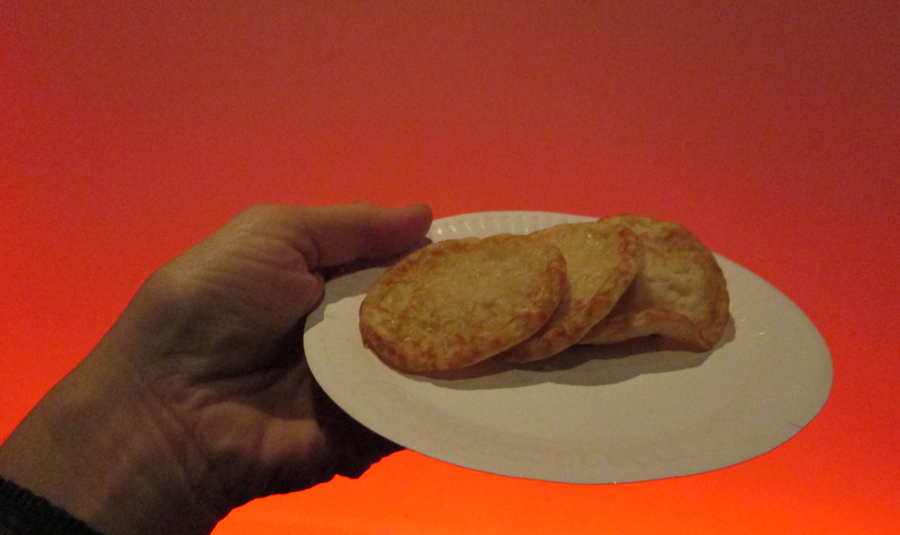 Pancakes and hand: a gracious shot against orange background

Or a dramatic pose! 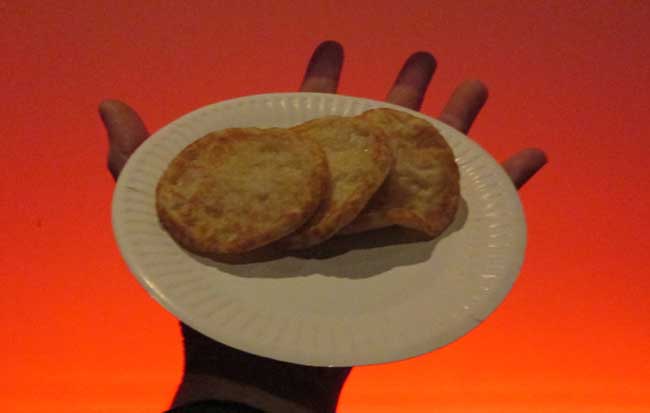 Then I moved slightly and noticed a ghostly blue light … 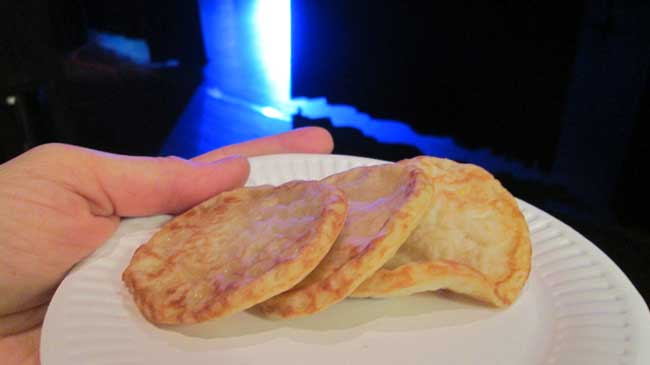 … which turned out to be the STAGE! 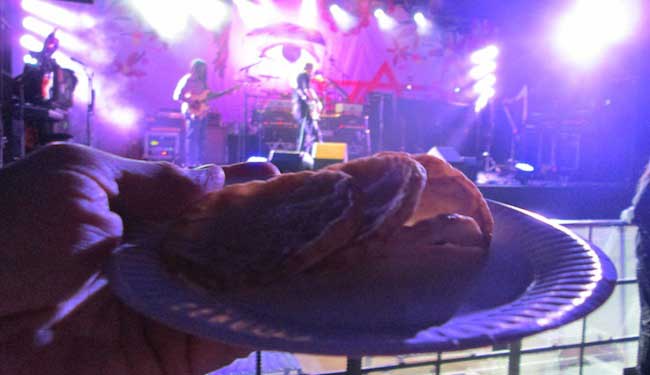 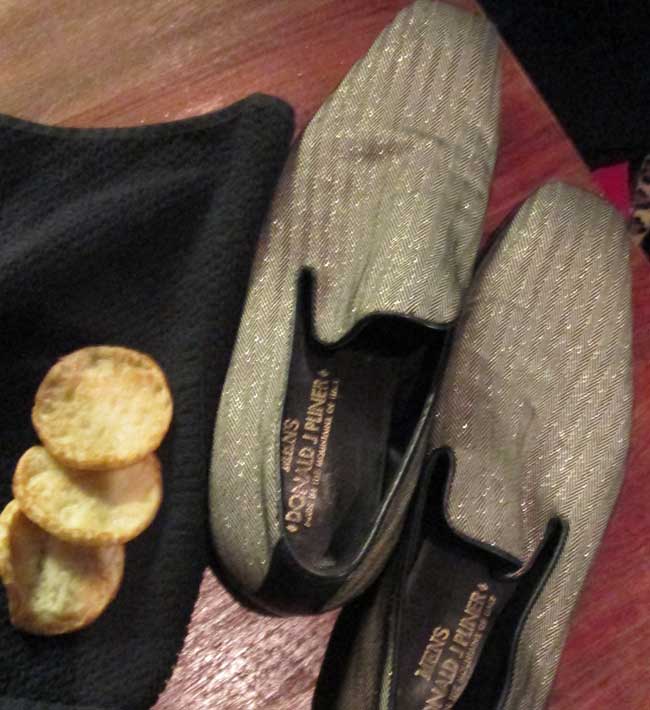 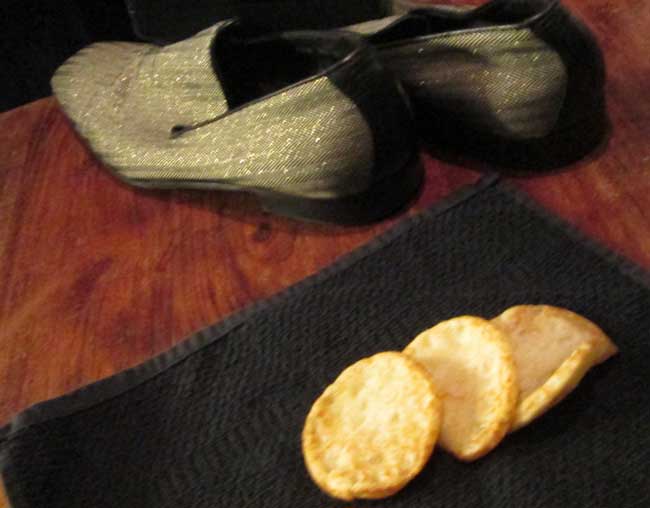 And then I threw them away.

And I forgot all about them until I emptied my camera.

So that was today.    And now I’m getting hungry again ….

This blog is part of the “Rock Harp Diaries” blog series about my experience touring as the electric harpist in the band of guitar legend Steve Vai.  We’re performing in Europe through mid-December 2012.  The tour schedule is here.  My next solo show is Fri. Dec. 21st in the Boston area.