DHC’s Gettin’ Down in Denver! 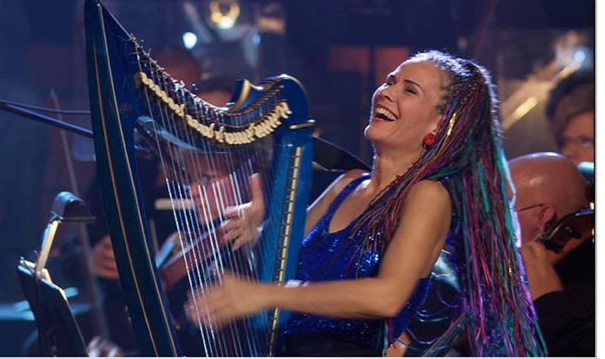 Deborah Henson-Conant is the world’s foremost electric harpist – but this ain’t your grandmother’s harp!

She’s a GRAMMY©-Nominated recording artist, and THE “DHC” behind the “DHC Blue-Light”  –  one of the fastest-selling new harp models in the world!
This 11lb carbon-fiber electric harp is Deborah’s signature instrument, and was designed specifically for her by the CAMAC Harp Company in France.

On October 1st Deborah Henson-Conant is coming to Denver for a 3-day Creative Residency sponsored by a consortium of local music organizations, that includes a solo show on Saturday, Oct. 1st at 8pm and a Hands-on Workshop on Friday, Sept. 30th, from 7-10pm.

Guitar legend Steve Vai calls her “The Jimi Hendrix of the Harp.” NPR’s Scott Simon described her as “the Love-child of André Previn and Lucille Ball.” The New York Times credits her with “reshaping the serenely Olympian harp into a jazz instrument by warping it closer to the Blues.” And the Boston Globe described her as “A combination of Leonard Bernstein, Steven Tyler and Xena, Warrior Princess.”
Henson-Conant is a one-woman orchestra, with electric harp, voice and a looper pedal she uses to layer sounds in real time, then weaves solo lines and vocals above it. The music in her shows ranges from her Grammy-Nominated Blues to the tender love song, “The Nightingale” from her PBS Music Special, to a Hendrix-inspired version of the Star Spangled Banner.

FORGET the demure harpist – Henson-Conant is a showman, entertainer and solid musician who’s been compared to musical greats from Leonard Bernstein to Elvis Presley.  She’s been featured on CBS Sunday Morning, The Today Show and NPR’s Weekend Edition, and in two full-length PBS music specials. Henson-Conant’s voice is compared to Carly Simon and Joan Baez; her playing to Chuck Berry and Jimi Hendrix; and her humor to musical comedian Victor Borge.  The shows are tied together by powerful, funny, affirming stories and universal humor.  She’s known for her renegade image, evocative singing voice, and shows that fuse music, theater, stories and humor.  Her playing ranges from full-out bluesy to heart wrenching ballad.  This is a feel-good, outside-the-box, bring-the-folks-you-love kind of show for audiences of all genders and ages- folks who want to celebrate what it means to passionately follow your own creative path.  Henson-Conant debuted with the Boston Pops, opened for Ray Charles at Tanglewood, jammed onstage with Bobby McFerrin, Doc Severinsen and Marvin Hamlish — and offstage with Aerosmith’s Steven Tyler.  She’s been featured on CBS’ “Sunday Morning,” NBC’s “Today Show” and NPR’s “Weekend Edition,” and interviewed by Scott Simon, Studs Terkel, Charlie Rose & Joan Rivers.