Baroque Flamenco … for YOU

I get to hear my music played by harpists all over the world.  But there’s one piece in particular that I really have to show people how to play.  That’s my fiery show-stopper “Baroque Flamenco.”  Honestly, when I finally sat down to write that music out, I had to literally invent notation to try to notate what I play — since the piece uses the harp as a combination melodic and percussive instrument.

Even though it’s all painstakingly notated on the page – the best – and fastest – way to really get the piece is to have me break it down section by section, show what’s important (and what isn’t!) and explain how I came up with effects I did – and what they mean musically so people understand how to create them with their bodies.

So a few of years ago I developed an online course just to show harpists of all levels how to play this piece the way I envisioned and composed it, in 3 separate arrangements: one for advanced beginners, one for intermediate and one for advanced/professional. The course teaches all three levels simultaneously and students dip in and out of all three levels as they want.  Teachers who will be teaching the piece take all three levels so they know how to teach it to their students.

At first the course was an intense 3-day ‘bootcamp’ where the students were immersed in the piece non-stop for an entire weekend, but it has evolved into a 4-week course that’s part of my 12-week program “Building the Bones.”

I Look at the Bones 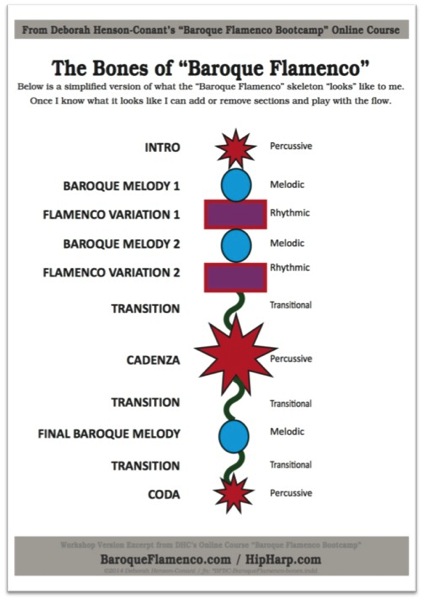 I break down the patterns one by one to show what I was thinking and what effect I was recreating, to explain what is repeating and what is changing so people can remember why and recreate instead of trying to memorize.

I break down the practice sessions to help students know where and why and how to focus.

And, because I think of the piece as a shape instead of as a sequence of notes, I made a drawing of that shape, so they can hold the whole piece in their minds at once the way I do.

One interesting thing about doing it that way is  that students can pick and choose different sections of the piece from the different arrangements – and they each put together a version that truly works for THEM – so everyone comes out playing something just a little bit (or a lot!) different.

The goal is for each person to find a version they can completely command so they can concentrate on performance values instead of the notes – and because the piece is inspired by marrying music to pure physical expression, the technical level of the ‘note playing’ is irrelevant – what’s important is the player’s ability to get the piece across physically.

So it’s a really fun course for me to teach – and thrilling, as the composer, to see so many people playing it –– and at the end each person in the course comes out playing their own unique arrangement.

Want to see the fire of Baroque Flamenco in Action?

I’ve been sharing some videos in the past few days of harp players performing “Baroque Flamenco”:

Also – a couple years ago I started a blog series called “MY Baroque Flamenco” with videos and mini-interviews from other harpists who’ve posted their versions of “Baroque Flamenco” on YouTube.  These are real players, from  professionals to amateurs, adults to children – and I’ll be featuring their stories of how they came to the piece and what they’ve learned to express of their own spirits through it.  You can learn more about the series HERE and link to the videos harpists have submitted! 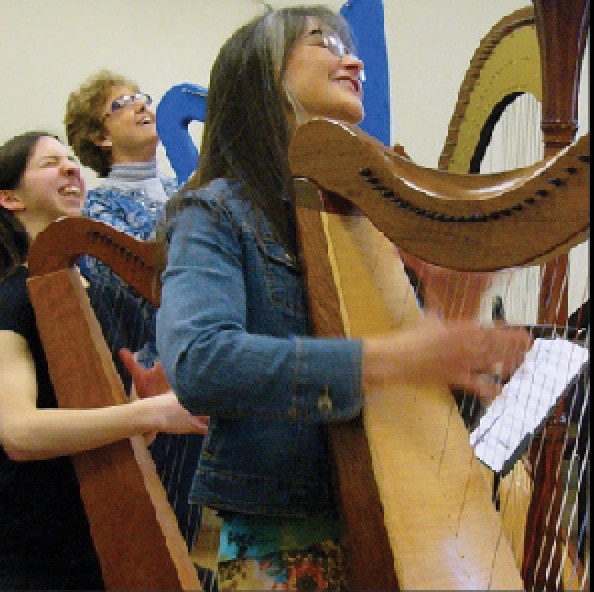