The "DHC Challenge" is the pilot project for a collaboration with harpist, soloist and educator, Robbin Gordon-Cartier. The project uses my harp concertos to support both community and learning by teaching them to harp ensembles and then performing them with community orchestras.

In this pilot project, Robbin's 41 harp students at the Cicely Tyson School of Performing Arts are studying my music and then performing 3 of my pieces for harp & orchestra in concert with the West Shore Symphony Orchestra Nov. 19, 2018. Learn more about the project in this post

Note confirmation for student's participation in this blog series: "I confirm that all the children at Cicely Tyson School of Performing Arts in these posts have signed photo/video releases from their parents. These releases cover having their stories, videos and photos shared as part of this project, including posts on Deborah Henson-Conant’s blog and website." - Robbin Gordon-Cartier, Professor of Harp, Cicely Tyson School of Performing and Fine Arts, East Orange, N.J. (10/11/18)

Robbin forwarded me to an article in the Montclair State University Website — and I’m quoting it below.

[NOTE: I have not gotten permission to quote it here – so if there’s a problem with this, please just contact me (see my contact page), let me know, and we’ll take it down.  Read the original article here] 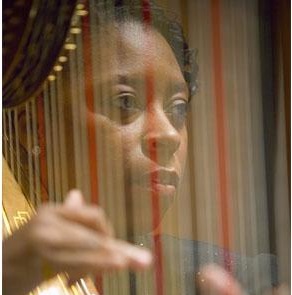 At some point in the late 1980s, Robbin Gordon-Cartier ’93 decided it was time to leave her job as a corporate trainer for restaurants and do something else with her life. “I was tired of traveling,” she says, “and I really wanted to get a college degree.”

That was the beginning of a remarkable journey for the award-winning harpist and educator that has included performing and teaching around the world, and building harp programs from scratch in New Jersey public schools. Gordon-Cartier is the director of the harp program at the Cicely Tyson School of Performing and Fine Arts in East Orange, N.J., and teaches harp to students who, if not for her, would not have had that opportunity.

…Gordon-Cartier earned a degree in Music Education [at Montclair University] and began teaching at the Roosevelt School in Elizabeth, N.J. “I was the vocal and general music teacher,” she recalls. “I used my harps to accompany my choirs and eventually began teaching harp to students who expressed an interest.” That was the beginning of what eventually became a full-fledged harp program at the school.

Two years later, Gordon-Cartier was invited to work in the East Orange District to start the harp program at the Cicely Tyson School. Though the challenges have been many, Gordon-Cartier’s love of teaching the harp keeps her motivated. “The challenges now are the upkeep of the instruments and the need still for more new instruments,” she says. “Full-sized pedal harps are a big expense!”

In addition to her work at the school, Gordon-Cartier has appeared on television, in recordings, and on stages around the world, and teaches master classes and at conferences. She is often consulted for advice on starting harp programs in schools …

In all this, Gordon-Cartier is most proud of not giving up. “My husband, Ric Cartier, was instrumental in convincing me that I was not too old to go to college. I received my bachelor’s degree ten years later than most students but have been able to make up for lost time since then,” she says. “You are only too old when you stop learning and passing on what you learn.”