I use my blog for a lot of different projects.  Some are series, some are creative challenges, some are upcoming events and projects and some are just random thoughts.  Here are some of the series and repeating posts: 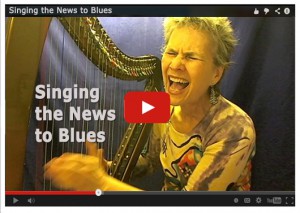 In these weekly video posts, I give the news of what’s upcoming and what’s just happened in my life, singing and playing impromptu from my studio at the harp.  Singing my ezine started as a challenge from a friend – and now it’s become a weekly exploration of music, spontaneity and what happens when you repeat a creative idea.

Sometimes I sing the news to Blues, sometimes to a Latin beat – whatever I’m feeling at the moment. This is still a new series, and you can see the posts I’ve uploaded here: 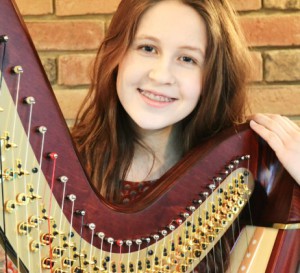 In this series, harp players of all ages from around the world share their own versions of my fiery harp showpiece, “Baroque Flamenco.”

“Baroque Flamenco” is one of the most widely played of my compositions. I published the solo work on three levels: Fledgling, Intermediate and Advanced, for both the pedal harp and the lever harp, so players of all ages and technical abilities perform it and make it their own.

I’ve also unofficially released concerto versions with both orchestra and chamber ensemble, so now harpists are playing it solo and in many different kinds of ensembles.  It’s really exciting to see all the many versions of the piece on YouTube.

In spring 2015  I began inviting players to feature their performances in a blog series called “MY Baroque Flamenco” in which they tell a bit about themselves, provide a video of their performance and then answer a series of questions about their experience with this piece they’ve made their own.

This is also a new blog series and you can see the first three posts here: 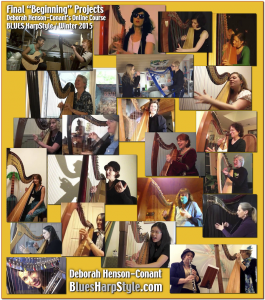 Sine 2012 I’ve been developing a series of online courses in jazz fundamentals for harpists worldwide.

My courses are generally focused on learning a specific skill or style of music and almost always include working towards a “Final-Beginning Project.”

We call them Final ‘Beginning’ Projects because one foundation of  all my courses is the idea of imperfect completion – and the understanding that a ‘Final’ project is really just the beginning of a lifelong relationship with this music.

My Winter 2014/2015 “Blues HarpStyle” course was particularly prolific!  21 of the 50 people in the course submitted final “beginning” projects in which they created their own, often original, Blues inspired by what they learned in the course.

Click here to  see the overview of this series, with links to all the performances.