Grammy-Nominated composer and electric harpist Deborah Henson-Conant (DHC) travels all over the world with the electric harp she invented — but it all started for her at “The Celebration Barn” in South Paris, ME where she first came as a student of the Barn’s founder, Tony Montanaro, nearly 3 decades ago.

She’s making a New England solo appearance on Sat. June 20th at 8pm, at at the Celebration Barn Theater.  For tickets click here.

“I wanted to take an 80-pound concert harp and shrink it down to an instrument I could strap on and play like an electric guitar,” explains Deborah Henson-Conant (DHC).  She was already on her way to becoming  the country’s leading jazz-harpist by the mid-80’s, but was still traveling with the huge instrument.

Frustrated by the harp’s limitations and her inability to fully express herself while playing it, she did something that started the transformation of both her instrument AND herself: She packed her big harp in the car and headed north to Maine, where she had heard of an instructor, Tony Montanaro, who taught “Physical Eloquence” – the art of physical story-telling, with voice, body – and –  everything.

DHC “As I watched Tony use his body like an instrument – I learned how to make my own awkward instrument into a part of my body.  And when I whined about the prejudices and stereotypes people have about the harp, Tony just looked at me and said,  ‘The harp is the instrument of the storyteller. Tell your stories’.”

After Tony taught her to be more physical with her harp, Henson-Conant knew more than ever that her vision of a truly portable harp had to be realized.  So she traveled to France and described it to the head of the world’s cutting-edge harp manufacturer, CAMAC.  He loved the idea. The result is the world’s leading electric harp, named after her, the “DHC-Light,” an 11-pound carbon-fibre instrument she wears – and she’s the world’s leading player and coach of this innovative instrument. 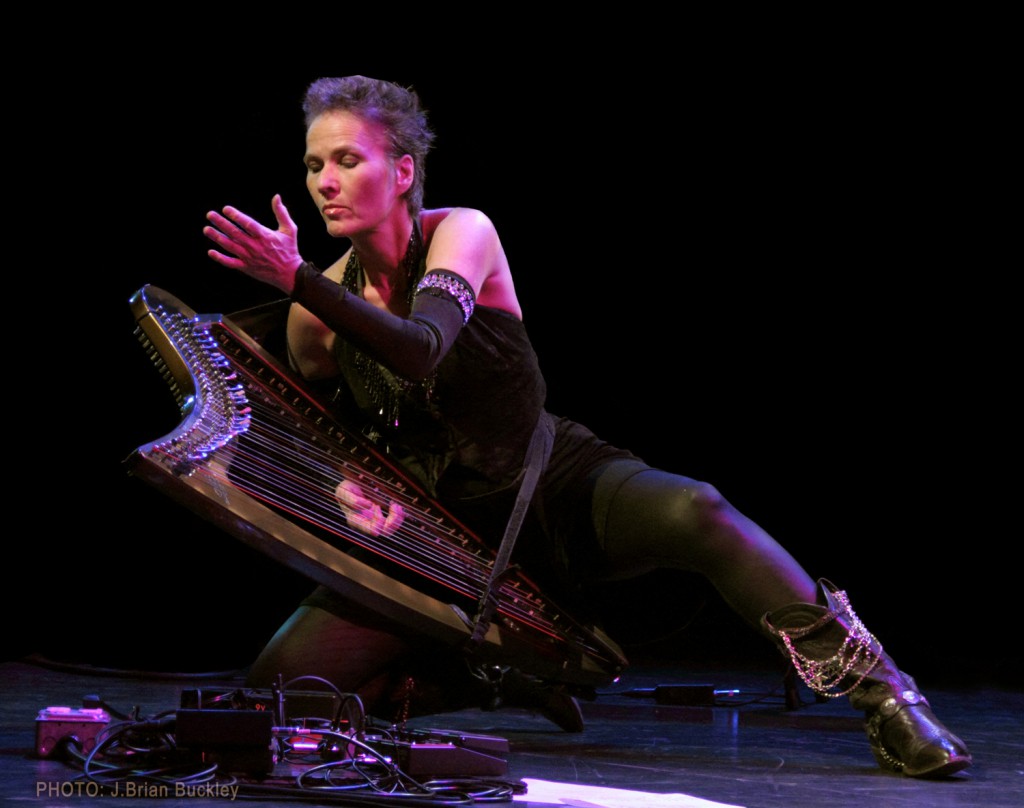 Fast forward to 2015:  She uses a looper pedal to layer sounds and create rhythmic grooves and improvises over them with her “DHC-Light”.  She combines styles and genres, focusing on styles that offer opportunities for physical expression — like Blues, Flamenco and theater-inspired music.  “All my work is about invention – on the spot, in the moment – and the combination of story and music with physical gesture you can actually hear” she says.

This physical expression is something she learned at the Celebration Barn, studying with Tony Montanaro.  You can read more about Tony’s influence on DHC here: https://hipharp.com/blog/10921

This intimate New England appearance is a chance to see the master of an instrument she conceived, up-close and personal – just hands, harp, looper-pedal, voice – and pure invention, on the spot where she learned to be free with her instrument, The Celebration Barn Theater stage.

On stage she performers solo concerts, one-woman shows and as a soloist with orchestras.  She combines musical genres and performance styles. Her music ranges from Blues to Flamenco, played on a custom-built 32-string electric harp that was invented specifically for her, and named after her, the “DHC-Light.” Her shows shows combine music, humor and theater, with a voice that’s been compared to Carly Simon and stories that harp on the good things in life.

As a composer, her concertos and solo works are performed by orchestras and soloists around the globe. As a coach and mentor, she works with impassioned harp players world-wide in her online courses.

Guitar legend Steve Vai calls her the “Jimi Hendrix of the harp.” The New York Times credits her with “reshaping the serenely Olympian harp into a jazz instrument by warping it closer to the Blues.” She’s debuted with the Boston Pops, opened for Ray Charles at Tanglewood, and jammed with Aerosmith’s Steven Tyler, Bobby McFerrin and jazz great Doc Severinsen.

For more artist info or to schedule an interview, contact: ?Joy Monteverdi, 781-483-3556, hipharp@hipharp.com