On Sat. Jan. 9 at 8pm Grammy-Nominated performer Deborah Henson-Conant brings her annual “Lose Your Blues” show to the Center for Arts in Natick, MA (TCAN).(Tix and info below) (click poster below to download PDF version)

What kind of woman does THAT? 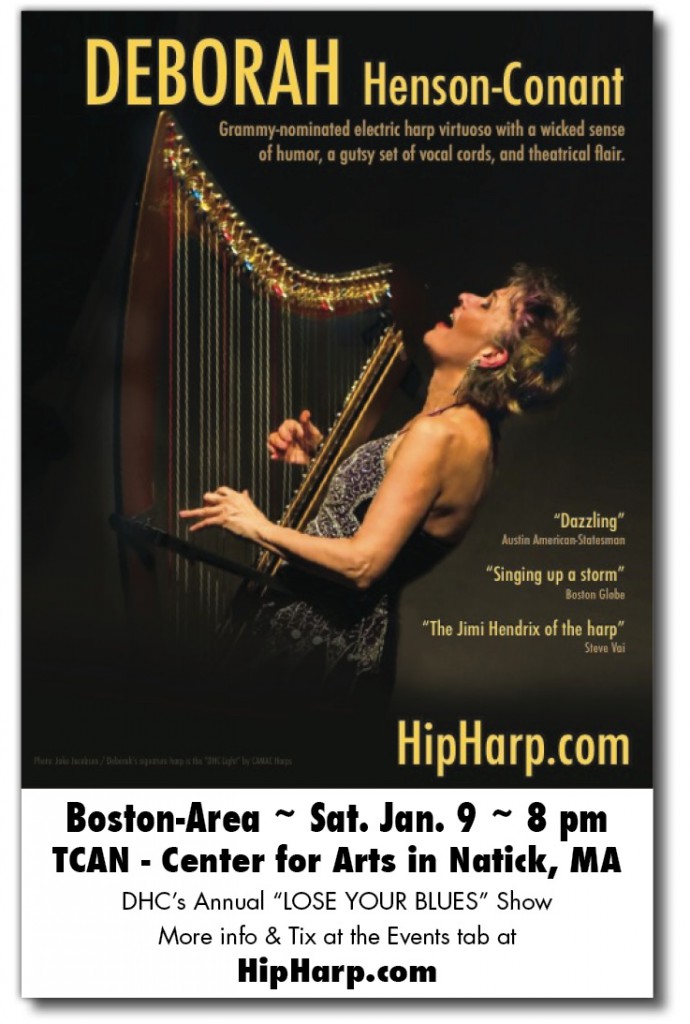 >> Can’t attend Live? Sign up for the artist’s guestlist for the Livestream and watch in your own livingroom<<

A woman singing the Blues isn’t so unusual. But this woman plays the harp when she sings.  The electric harp.  And she straps it on and glides across the stage with it.

It’s not your Grandmother’s harp – that’s for sure.  It’s a custom-built carbon-fibre instrument — stripped down, futuristic.  And she wears it like Aladdin rode his magic carpet – as a vehicle into another world – a world with sounds you never thought you’d hear coming from a harp: Latin rhythms, Blues riffs, Flamenco strums.  A world with stories about ordinary people discovering extraordinary depth inside themselves.

That woman is “DHC” – Deborah Henson-Conant – a GRAMMY®-Nominated electric harp virtuoso with a wicked sense of humor, a gutsy set of vocal cords and theatrical flair – and there’s a reason she always plays a “Lose Your Blues” show in the dark days of early January.

The lead-up to the Holidays is intense – then it all deflates in the cold light of the new year when the Blues hit you hard.  That’s why every January DHC brings her “Lose your Blues” show to TCAN (The Center for Arts in Natick). This year it’s on Sat. Jan. 9, 2016 at 8:00pm.

One of the most inventive humans you’ll ever meet brings the instrument she created to TCAN to give you the adventure of a lifetime into the world of her musical imagination. She invented the instrument, then took it to the CAMAC Harp company in France, where it became the “DHC-Light” the world’s top-selling electric harp.

She strides on stage like a rock-star, wearing an instrument that looks like it levitated off the Star Trek set.  She sings. She pulls melody, chords, bass lines, percussion and rhythms from her 32 strings – then loops them in real-time, right in front of the audience, with a looper pedal – creating soundscapes and rhythmic grooves she improvises over.   She  uses spoken word and story to riff over the music ’til you can’t tell where the speaking stops and the music starts.

When you leave the show you know you’ve experienced something you’ve never even imagined –  and it was funny, deep, impressive, inspiring –  it makes you question everything you thought was impossible in your own life.

What kind of woman does that?

Find out Jan. 9 at TCAN in Natick!

Guitar legend Steve Vai calls her the “Jimi Hendrix of the harp.”  The New York Times credits her with “reshaping the serenely Olympian harp into a jazz instrument.”  The Austin-American calls her “Dazzling.”  She’s fronted the Boston Pops as a soloist, opened for Ray Charles at Tanglewood, toured with guitar legend Steve Vai, run her one-woman show at the Edinburgh Fringe,  starred in her own Public Television music special and jammed with legends like  Bobbie McFerrin, Steven Tyler and “Classical Gas” legend Mason Williams –  you can see videos of some of those jams on her website, HipHarp.com.