There’s blood, and gore, and humor and romance … and you might want to wear a poncho.  But you will definitely  have fun at Whole Tone Opera’s “La Zombiata” this Valentine’s Day weekend.

How do I know?  I went to Whole Tone Opera Company‘s Dress Rehearsal tonight and below are some of the photos I tweeted!  (See them all at my twitter feed & while you’re there, follow me!) 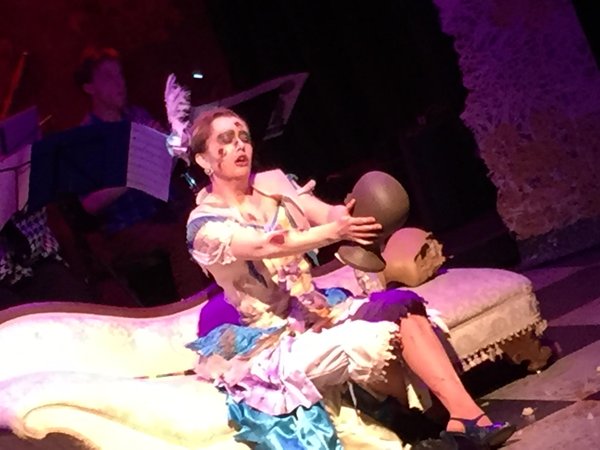 The heroine, just  moments before chowing down on her beloved’s forehead #Zombiata Valentine’s Day opera

Last week I got an email from my former assistant, Jeila – who later became the drop-dead Diva for my “Mythic Women” chamber ensemble project in 2014 (who knew the young woman working in my office was a major operatic talent??)

She emailed because she’s in a Romantic Zombie Opera for Valentine’s Day weekend at one my favorite little theaters, the “Davis Square Theatre” in Somerville.

I was already on the lookout for new music-theater shows because  a month ago I started working with a musical theater coach/producer in NYC, Ken Davenport,  who’s coaching me on the steps to get my show “The Golden Cage” produced in NYC.

And my first step is to go see as much new musical theater as I can, preferably when there’s talk-back or I can meet the director and production personnel. 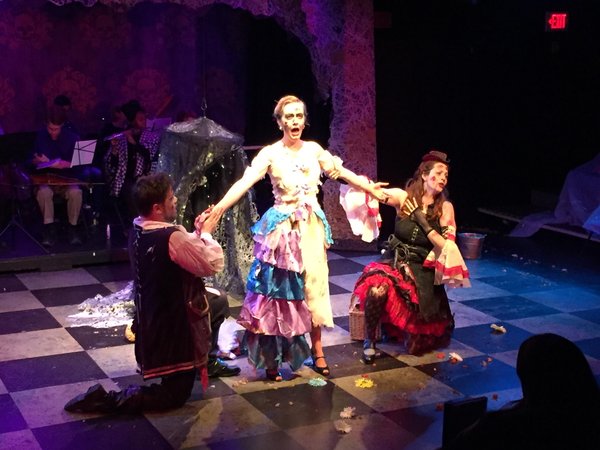 The goal is for me to learn more about what a director does, and what different direction looks like, so I can learn what kind of directors I’d click with.

So when Jeila emailed me I asked if there was any chance I could come to a dress rehearsal – and that’s where I was tonight — and it was GREAT FUN!!

There’s some great singing by the two main leads,  some wonderful moments with the full ensemble — and excellent zombie-moves – singing, dancing and being campily creepy  — by the whole cast.  And I only saw the dress rehearsal.  Can’t wait to see the show.

It’s a single act comic opera (the perfect length), with a full mini-orchestra of woodwinds and strings sitting right behind the actors in a kind of grotto – and if you turn around and peep up into the corner, the conductor’s at the back of the house  in his own little spotlight so the musicians can see him. 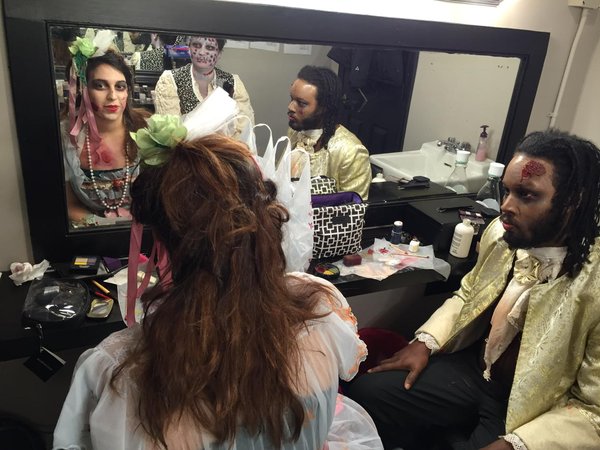 Zombie reflections in the dressing room just before tonight’s  #zombiata dress rehearsal – Jeila  – my personal Zombie Diva is on the Left.

The costumes and lighting are great, the sets are fun and inventive and there are some wonderful momentary visual ‘tableaus’ – one of which looked eerily  like the Last Supper (no photo of that – you’ll have to go to the show to see that one).

Is the music the ilk of Puccini, Rossini or Verdi?  No … but who cares???  Did any of them ever write a romantic ZOMBIE opera?

If you have a chance to see the show this weekend, you’ll definitely enjoy the experience no matter what your musical tastes are —  and you’ll get to see a production by a new theater company in the Boston area committed to producing music-theater works by women composers … (like me!)

Frankly … as someone who does NOT have a valentine, this was highly satisfying as valentine’s fare.  There’s blood.  And guts.  And arias,  a chainsaw … and a picnic.  It’s FUN, it’s live, it’s new and you can be right in the middle of it!