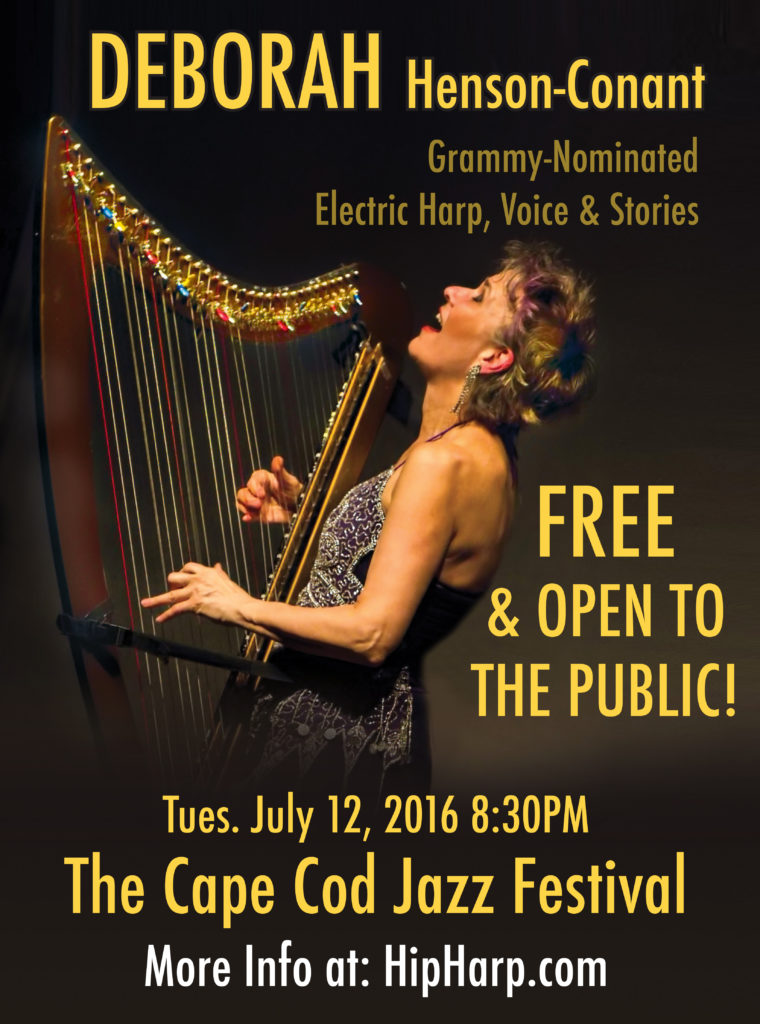 Deborah Henson-Conant doesn’t just play her instrument.  She invented it, and wears it like an extended body-part. It’s a 32-string electric body-harp and she’s Grammy-Nominated composer and performer with a wicked sense of humor, a gutsy set of vocal cords and theatrical flair.

She tours the world with her body-harp.  Playing, singing and telling stories from her life while creating improvised soundscapes for her shows from jazz, to latin, to musical-theater styles and powering the music with electric guitar effects and a looper pedal.  She’s written countless one-woman shows, concertos and chamber works, but her solo shows, like the one she’s bringing to the Cape Cod Jazz Festival on July 12, are a chance to see this award-winning innovative artist in full force and full spontaneity.

How does a single artist create the experience of being a full band?  Henson-Conant splits her 32-string instrument into 3 parts which roughly correspond to:  bass, rhythm-guitar and lead, so she’s playing all three at once. She then uses a looper to create rhythmic pads and soundscapes – and her voice singing and with spoken word.

The advantage of being a solo artist is the spontaneity, the ability to expand or develop any part of her show based on the experience of the moment.

What do most people like about her shows? “The comment I hear most,” says the artist, “is that they love the energy, the humor and the experience of seeing an artist’s mind opened right in front of them. They’re also blown away by experiencing first-hand how much you can do with what looks like a very simple instrument.  The words I hear most are ‘energy’ and ‘inspiring.’

July 12: An evening with DHC's music & stories, under the stars, overlooking the Pleasant Bay. Click To Tweet

What has she done?  Guitar legend Steve Vai calls her the “Jimi Hendrix of the harp.”  The New York Times credits her with “reshaping the serenely Olympian harp into a jazz instrument.”  The Austin-American calls her “Dazzling.”  She’s fronted the Boston Pops as a soloist, opened for Ray Charles at Tanglewood, toured with guitar legend Steve Vai, run her one-woman show at the Edinburgh Fringe,  starred in her own PBS music special and jammed with legends like Bobbie McFerrin, Steven Tyler and “Classical Gas” legend Mason Williams.

Her solo appearance at the Cape Cod Jazz Festival is a rare chance to see the master of an instrument she invented, up-close and personal – just hands, harp, looper-pedal, voice.  An evening surrounded by jazz, under the stars, overlooking Pleasant Bay.

13th Annual Cape Cod Jazz Festival takes place at the Wequassett Resort and features some of the region’s best performers.  It has become one of the most anticipated events of the summer season and is free and open to the public.  Cocktails and a light menu are available throughout the evening.

On stage she performers solo concerts, one-woman show and as a soloist with orchestras.  She combines musical genres and performance styles. Her music ranges from Jazz to Blues to Flamenco, played on a custom-built 32-string electric harp that was invented specifically for her, and named after her, the “DHC-Light.” Her shows shows combine music, humor and theater, with a voice that’s been compared to Carly Simon and stories that harp on the good things in life.

Henson-Conant hit the jazz scene in the early 90’s as the only woman instrumentalist on Dave Grusin’s jazz label, GRP – and she spent the 90’s touring Europe with her trio playing contemporary jazz originals.  She’s now another rarity, a woman orchestral composer whose jazz-inspired concertos are performed  around the world – and as the creator and founder of the first online school for improvisational jazz harp studies.

As a composer, her concertos and solo works are performed by orchestras and soloists around the globe. As a coach and mentor, she works with impassioned harp players world-wide in her online courses.

For more artist info or to schedule an interview, contact: Joy Monteverdi, 781-483-3556, info@hipharp.com