A Culture grows from one Point of Connection: The Harp 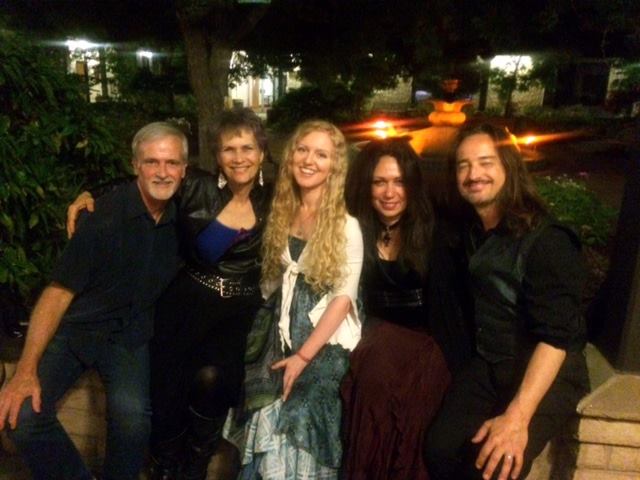 Does this look like a group of old friends in a garden?  Well, it is … it’s also a representation of one rich corner of a culture that’s developed over the past 30 years around the lever harp.

On the left is Ray Mooers, the creative mind and spirit behind “Dusty Strings” musical instruments – one of the most successful craftsman-built harp companies in the world.

Then there’s me, and in the middle Diana Rowan – a harpist who, like me, is a performer, recording artist, and has also built online coaching programs to liberate harp players from their creative cocoons.

The dark beauty beside her is Lisa Lynne, whose book on developing new concert venues is about to be published. Lisa and I have been friends since the 90’s when we met in Germany as performing-and-recording artists.

On the right end is Aryeh Frankfurter, both a harpist and a record producer (also, Lisa’s husband and musical partner) who also plays an instrument even more esoteric: the nykelharpa – the precursor of the violin.

The invisible person in this photo is the one who created the opportunity for us to all be together: a harpist named Jessica Siegel owner of Harps, Etc. in the S.F. Bay Area, who conceived and manifested this new, and highly successful, International Harp Festival that became a reality last week.

What’s so important about this?

These are all people who have created a life, a livelihood and a legacy from the same unlikely instrument, independent artists who are now coming together to build a community that’s not about the harp, so much as empowered by it’s own creative expression with this instrument.

We’ve all known each other for years, through many career evolutions (Lisa was once a heavy metal bass-player, Jessica and I once shared a for-your-dining-pleasure background-harp-music job in a San Francisco hotel).

Every one of these people play or build an instrument that was considered basically a ‘toy’ instrument 30 years ago.  These were literally called “student instruments” – like a tricycle or a bike with training wheels – and each of us has played a part in elevating that instrument into a concert and recording instrument — and built community around it.

And we’re just a small representation of the development of the harp – and especially the lever-harp – over the past 30 years.

This is an illustration of one my most deeply held beliefs:  it doesn’t matter what you do – it only matters what you do with it.  Each of these artists and craftsmen is very different.  We all started with  the same basic material and we’ve each evolved it very differently.

And that’s part of what creates a rich community – when a point of connection also becomes the point of evolution and self-expression – and when there’s room for anyone with their own passion and commitment to become part.

And as each of these artists reach larger and larger audiences, that community becomes its own rich culture – and I love being part of that.  As listeners or players, I hope you do, too.