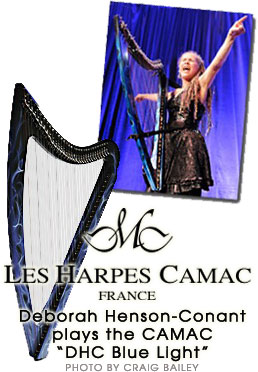 The harp, the artist & the company that made it happen.

The “DHC-Light” is CAMAC Harp’s  latest collaboration with strap-on-harp-legend Deborah Henson-Conant. Made of super-light, mega-strong carbon fibre, it weighs just 11lbs, boasts a new lever design, and comes in 34- or 36-string models. Even Deborah herself can’t get a back-up model right now because of the length of the waiting list.

Ingeniously, Camac collaborated with bicycle manufacturers to make it happen!

Deborah began working with CAMAC’s former CEO, Joel Garnier, in the early 1990’s , while she was on the hunt for a lever harp she could harness to her body and move about on stage with. 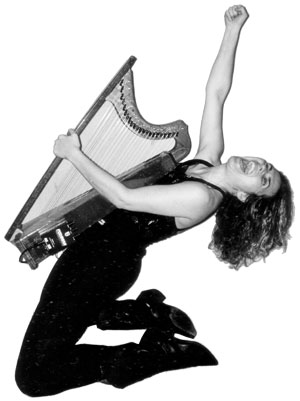 “I had wanted a harness harp for years. Some harp makers built quick prototypes (such as my beloved friend, John Hoare of Pilgrim Harps), but finally, I got a small Rubarth lap harp, covered it with red-and-silver contact paper, put a pickup in it, made a rudimentary harness for it, took it on tour and played it for Joel.  He said, “Ah, Deborah, now I see what you mean,” and the next time I saw him (it seemed like 4-6 months later, but was maybe more), he handed me the prototype of the Baby Blue. I still have that very first prototype (and you can see it here – this photo is before I even covered it with contact-paper).

I built a new harness (the prototype for what we’re all using now), a friend modified the harp (which was wood, so fairly easy to modify) it so it could attach to a Bogen camera-tripod as a stand, and I started touring with it, wrote orchestral pieces for it, and learned about amplification.   For awhile I always shipped the harp in a bicycle box, as It fit perfectly and I could often get it on a plane free that way. 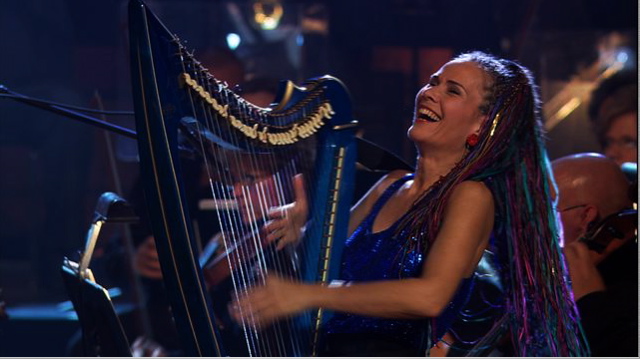 The end of the era came soon after at the Arles harp festival in France, when I came without my Baby Blue and played their newest model.

Technical improvements had made the model so heavy that it was painful to wear, even for me, someone pretty big and used to it. It was painfully (literally) clear that that model had no future commercially as a harness harp.  It was that ‘failure’ that forced Jakez and me to sit down and talk about the future of the instrument.  It seemed like the idea was either going to die and I’d be one of a few people left in the world playing the original model, or the next model needed to be revolutionarily different.

Jakez decided to go ahead with the expense and time investment of a completely new model, and asked me for input on what changes we needed.  That investment was huge on many levels:  there was no way to know that this investment would pay off financially; I don’t think there was a huge interest in harnessable harps at that point — something which seems to have changed — but he would know more about than I.  In retrospect, I’m awed at the leap he took, both financially and creatively. 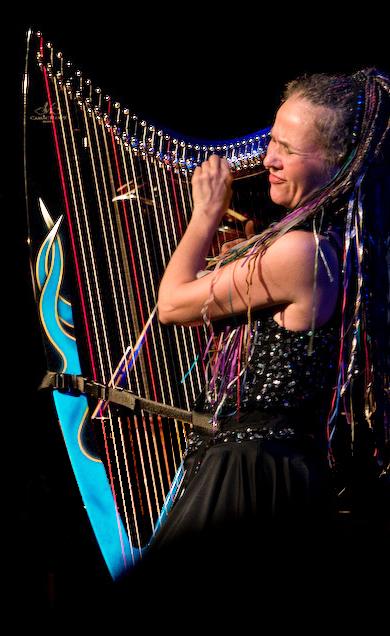 Jakez tells me that I had been going on at him for so long to work with bicycle manufacturers to develop a harp with a truly light carbon-fibre frame, that finally he did. It wasn’t as simple as copying their manufacturing processes, however.

The main problem in designing a lighter harness harp was the cost of producing a mold for the body of the harp. This was prohibitive, because it is a technology which is designed either for companies who don’t care about costs (competition bicycles), or who count on big quantities (mass production). As a harp maker, Camac was neither of these.

Another technical problem we faced was that the harp needed wooden parts (for the tuning pins and levers, for example) inserted inside the carbon fibre skin of the body, which does not happen with bicycles because they only have foam.

In the end, the idea of a mold was dropped entirely, and Camac chose to produce the harps the same way cycle manufacturers produce their prototypes – by hand, one by one. The inside parts are produced in the Camac workshops, the foam parts and wooden inserts are cut out, the bodies are assembled and then the harps are sent to the bike company, who has the knowledge to cover them with the carbon fiber skin with a special “bag” and a vacuum system.

The new carbon fibre harp was a huge success for me from the moment I put it on. I remember that moment – all of us:  Jakez, Jonathan (my husband/producer) and I – noticed that it was as if my body and my hands had just been waiting for this instrument.  The low C string (just 2 more strings than I’d had before) was revolutionary in terms of my playing — it suddenly gave me a range and heft I hadn’t realized was missing — suddenly this was a hugely viable solo instrument.

That was a magical moment. Not because something “unusual” happened, but because, after years of working with Joel and Jakez on the harp, and with Jonathan on how to project that sound best in both concert and recording situations — suddenly everything clicked into place.  We’d reached – not the end – but the true beginning of this instrument.

About a year after that, at Jonathan’s suggestion, I  started experimenting with a looper pedal — and with the convergence of those two technological changes: the expanded, improved instrument and the addition of the looper, suddenly my shows and my way of composing expanded.  I’m still right at the beginning of that development, so I feel like a hungry gourmand whose just sat down to a splendid table.

The DHC-Light trumps the Baby Blue in pretty much every way. The sound is more even, it’s nearly half the weight, with more strings, better levers*, and visually it captures the imagination of the harp-playing audience.

Everything just seems to have ‘clicked’ with this model.  And now it’s a matter of improving little things (like an anchor pin for the harness; a better, lighter stand that allows for removing the harp more easily; a simple holding stand for touring, etc.), which are often the responsibility of the user (me!) to develop.

The fundamental instrument is … finally … IT — the instrument I dreamed of, what I see as the crossover instrument of the 21st century.” 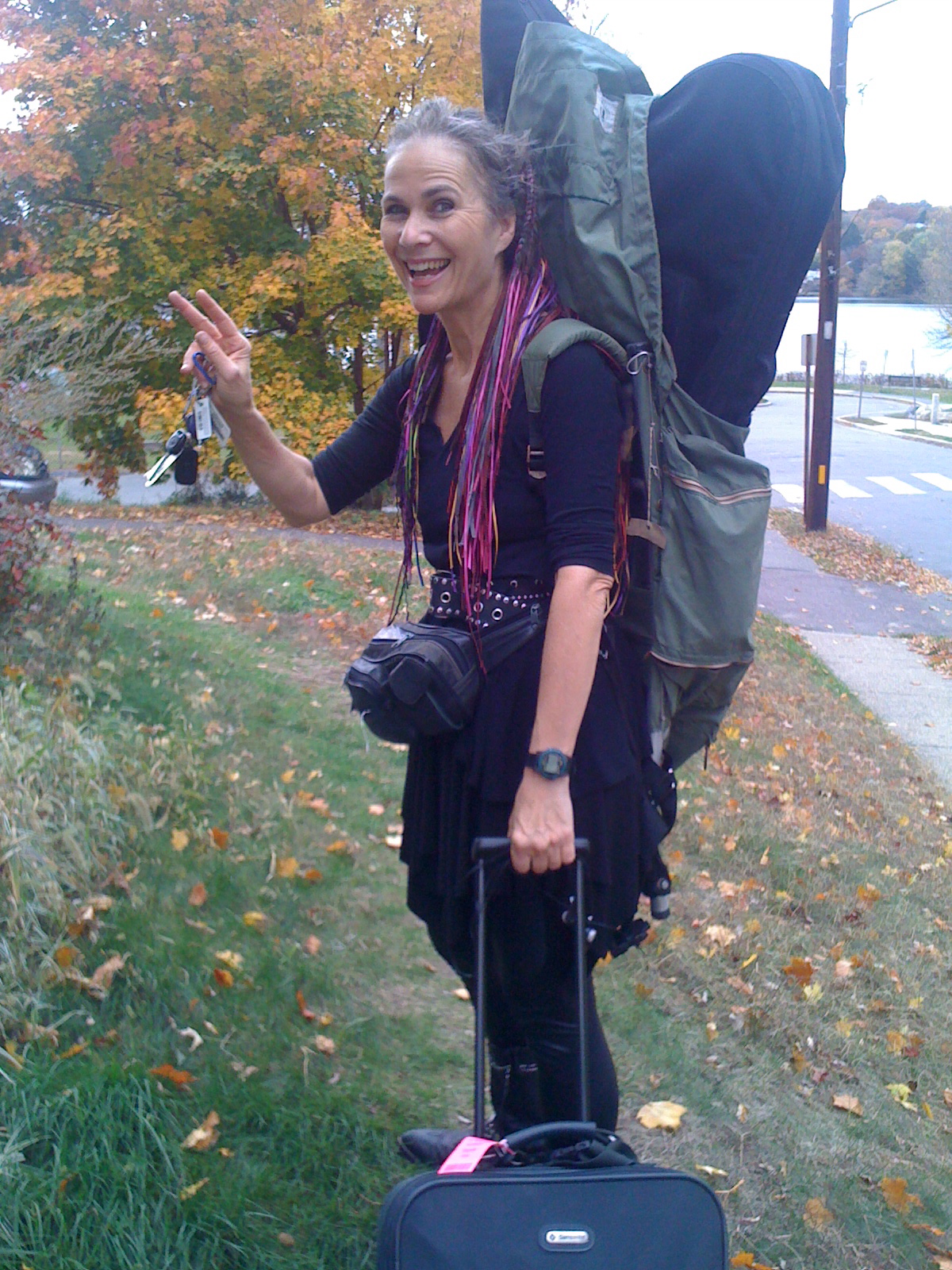 Jakez Francois, CEO of CAMAC Harps adds one more note: “I think there is an additional reason why more people want a DHC-Light: it is more than 10 years that harpists see what Deborah does with that harp, most of the younger generation don’t even know that there was a time when portable harps did not exist, and they find just normal to have one if they want to play non conventional music. Step by step, the harp made a big step.”