One of my greatest luxuries is taking a hot bath and reading a book. 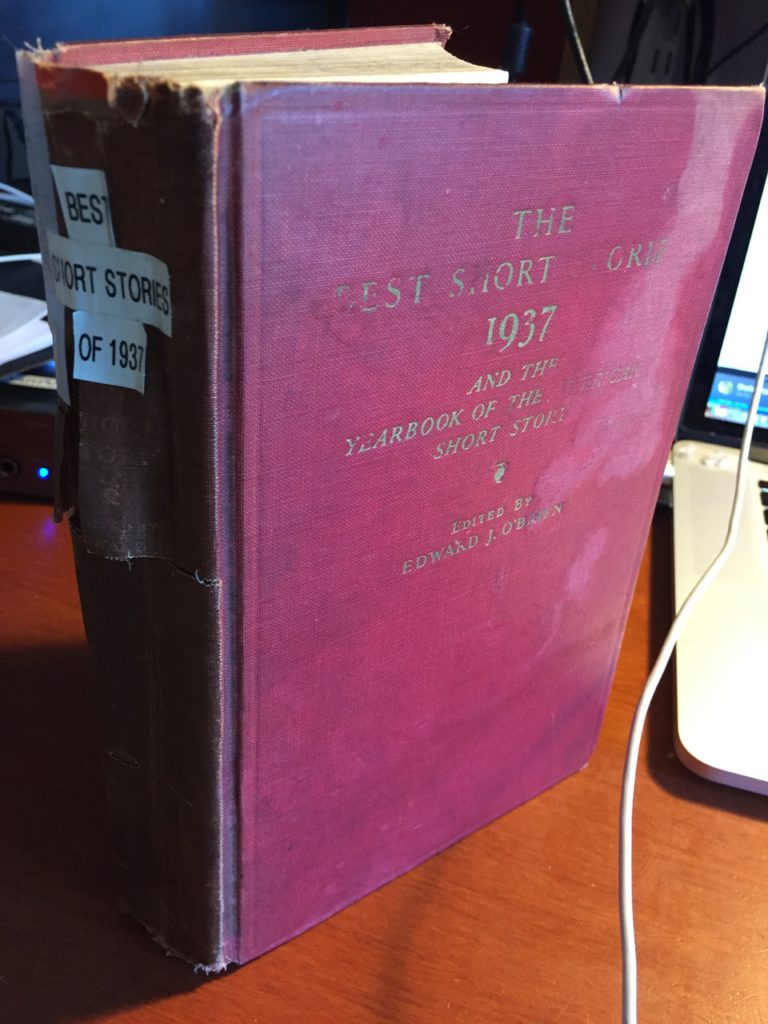 I know it’s decadent, but there, I’ve admitted it.  I’ve managed complex arrangements in hotel rooms to create impromptu reading stands just out of splash-range because my #1 rule of bathing-and-reading is No iPads in the Bathtub.

That’s because I often fall asleep in the tub.  Which adds to both the luxury and the decadence.

Also the fear of a water-landing and submergence for the iPad.

At home I don’t need to go to such great lengths.  My library is in a small room just next to the bathroom, and my favorite books are there, along with some books I’ve forgotten about – books I collected, or that were gifts, or that I simply haven’t read in years.

There’s no prohibition against real books in the tub. Real books get to go anywhere.

About a month ago, I was desperately searching the top shelves of the library as the bathwater was running, when I found “Best Short Stories of 1937.”

I settled into the tub, checked the table of contents and opened to a story called “The Girl with the Flaxen Hair” by Manuel Komroff. I chose it simply because it’s the name of a piece of music by Debussy.

It was another Pinocchio/Pygmalion story. These stories seem to be stumbling into my life right and left.

“The Girl with the Flaxen Hair” is the story of a sad, lonely man who falls in love with a manikin.  He steals her out of show window, takes her home, treats her excellently, dances with her, tells her about his day when he comes home from work, brings her presents, and is so happy in his relationship with her that he becomes a happy man.

Vowing to become the man worthy of her, he buys himself new clothes, plans a vacation and stands up for himself at work – all with complete conviction and the power of their love to support him.

He changes.  He lives up to his fantasy.

He comes alive for the people around him. And someone falls in love with him.

He returns the manikin and he begins his life.

It’s the story of a man who’s own decisive action becomes his ‘inciting incident’ – the action that changes his life, that brings him alive.

Funny, until I wrote this post, I thought the story was just that his commitment to his manikin fantasy brings him to life – but I just realized the story is also about him becoming alive to other people.

I realized that when we become alive to ourselves, when we commit to our long-held fantasies of what it would mean to be truly alive – that brings us alive to other people, too.

In my mentorship program, “Harness Your Muse,” I am constantly “throwing down the gauntlet” for my mentorees – creating deadlines for projects that bring their shows and composition projects alive for them, having them engage with half-baked parts of their projects as if they were completely realized.  I call these exercises “Shape Shifters” but I just realized they don’t just shape the project – they actually bring it to life and not just for us … but for the people around us.

Hmph!  Time to get me a manikin!

[Ha! Google just told me that this story made it into Stephen King’s “Best American Short Stories of the Century” anthology (which I just now bought – in physical form – used of course. Who would ever buy a new book when you can get a used one and have the chance of stumbling on some other reader’s marks in the margin?)]