It’s how I’ve been writing music since I was a kid. I act it out.  I play all the parts, and completely indulge myself in the emotions and physicalization.

And now that I’m working on (hopefully final) revisions of “The Golden Cage,” pianist & music-director Tim Maurice and I are meeting weekly to go through the music, with me acting and singing both the characters.

It’s how I’ve been writing music since I was a kid. I act it out - play all the parts, indulge myself ... Click To Tweet 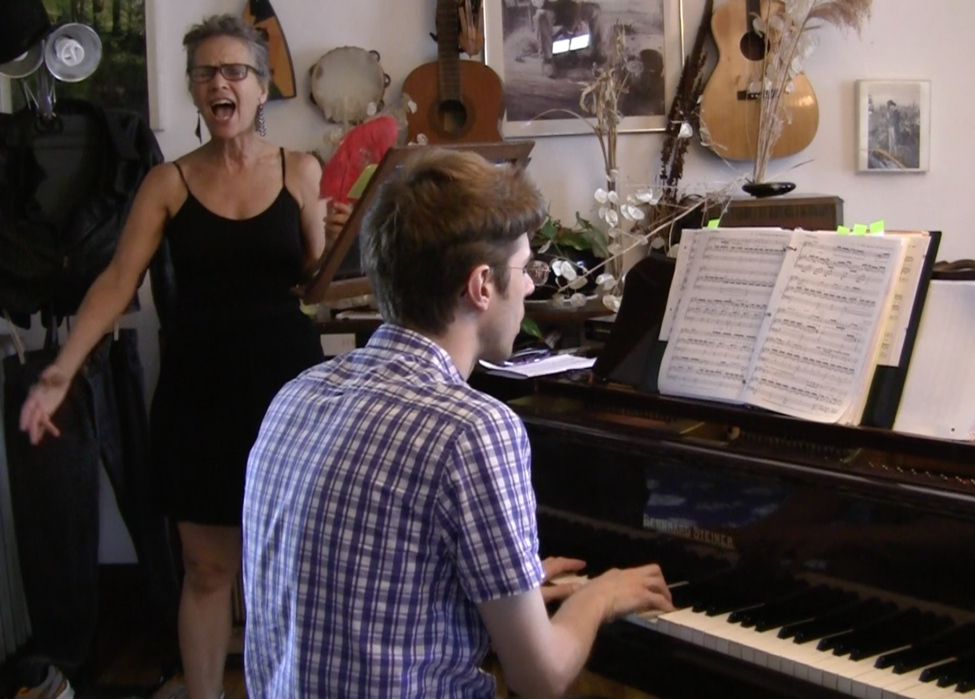 Boris sings “I swore I’d be the one to prove the myth was true!” 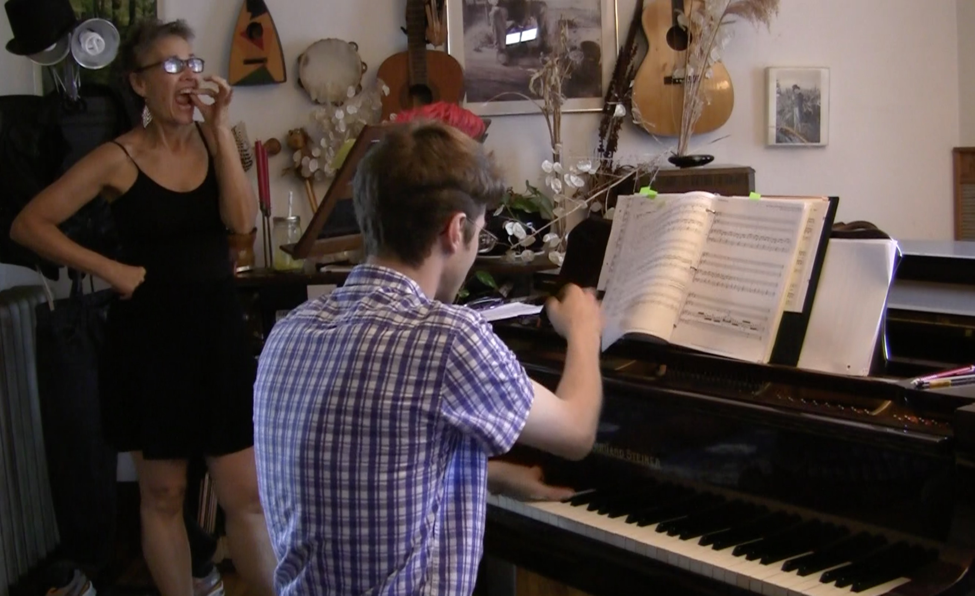 Alphea sings “Nothing ever changes today from being today.”

… and Tim is the entire orchestra.

I’ve been doing this as long as I can remember – telling stories with music and acting them out.  The difference is that now I have a team I work with.

It was awkward at first, indulging my creative imagination in front of someone else – acting out while Tim calmly plays the piano.  But now we’re used to it and I’ve learned to feel safe acting things out with Tim in the room.

The one thing I try not to do is burst into tears in front of him, or sing exceedingly loud right in his ear.

It was awkward at first, indulging my creative imagination in front of someone else Click To Tweet 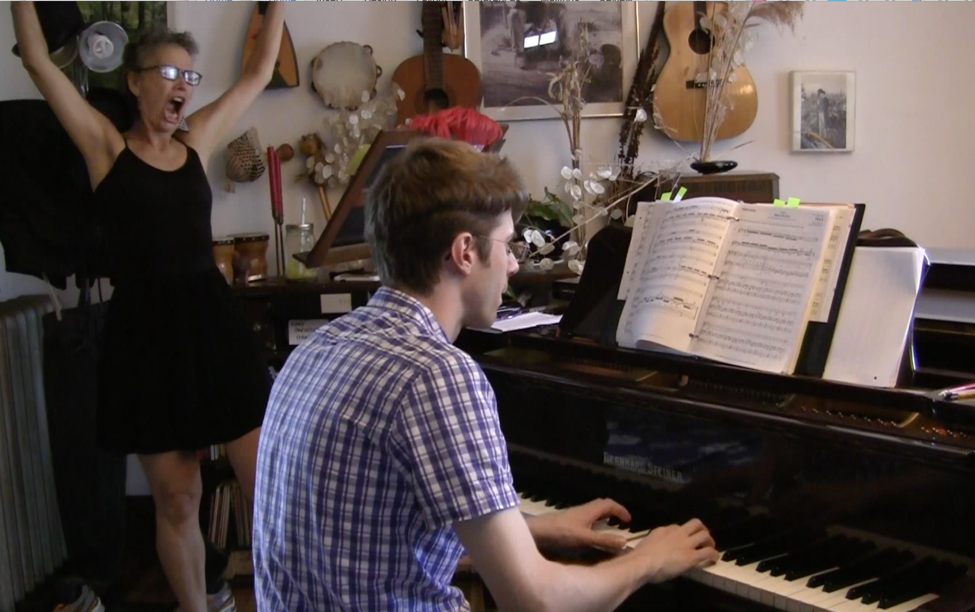 The big change recently is my new grand piano [read about HERE] which makes a huge difference for both Tim and me. 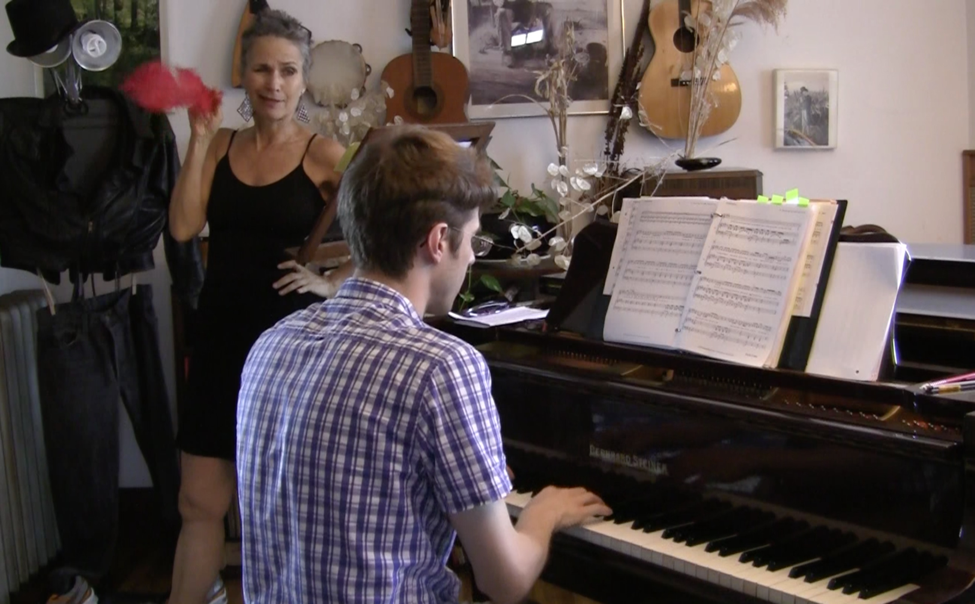 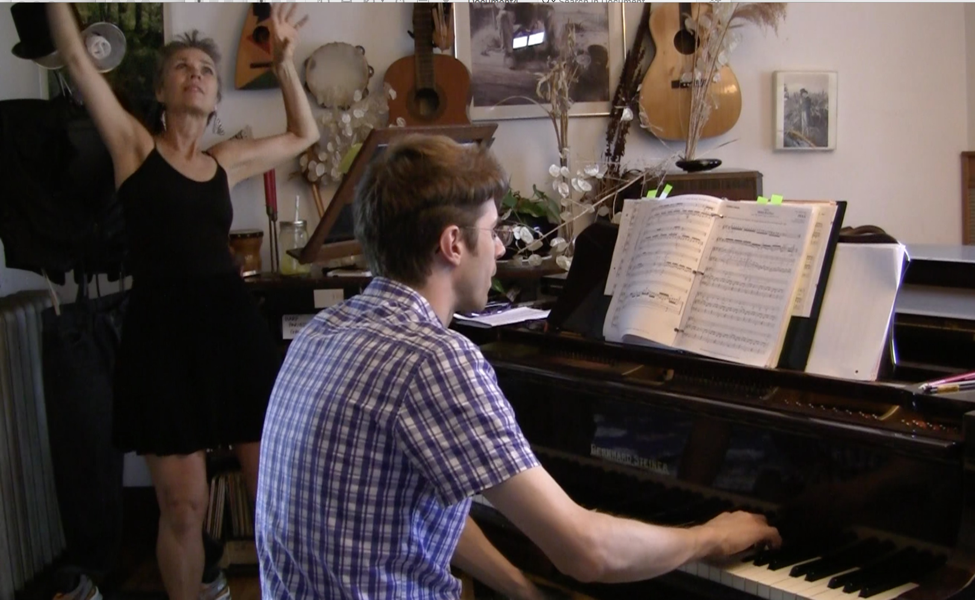 Above, Alphea tries to catch the feather – and yes, I have to act it all out in order to know how the music feels with the actions. Also any dancing – whether being one person or two – is essential.  But that’s more just for fun.

I have to act it ALL out, in order to know how the music FEELS with the actions. Click To Tweet 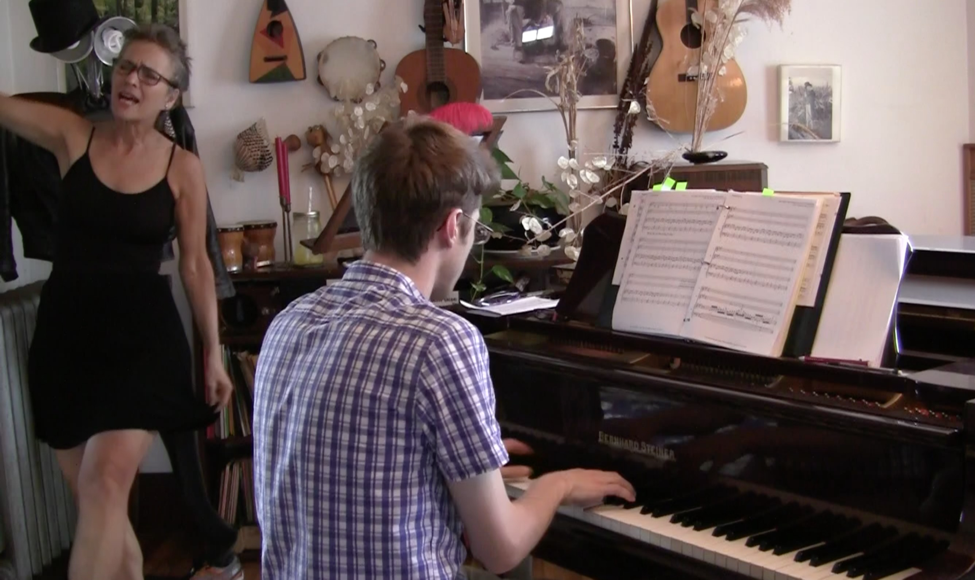 The way we do it, Tim and I meet every week for a rehearsal.  When we first started, the show was a mess of different pages and manuscripts, and some weeks I was so involved in other work I hadn’t done any editing.  But we’d meet anyway, and go through what I had, even if it was exactly the same material as the week before – because it’s in these session that I write and rewrite the shape of the show. 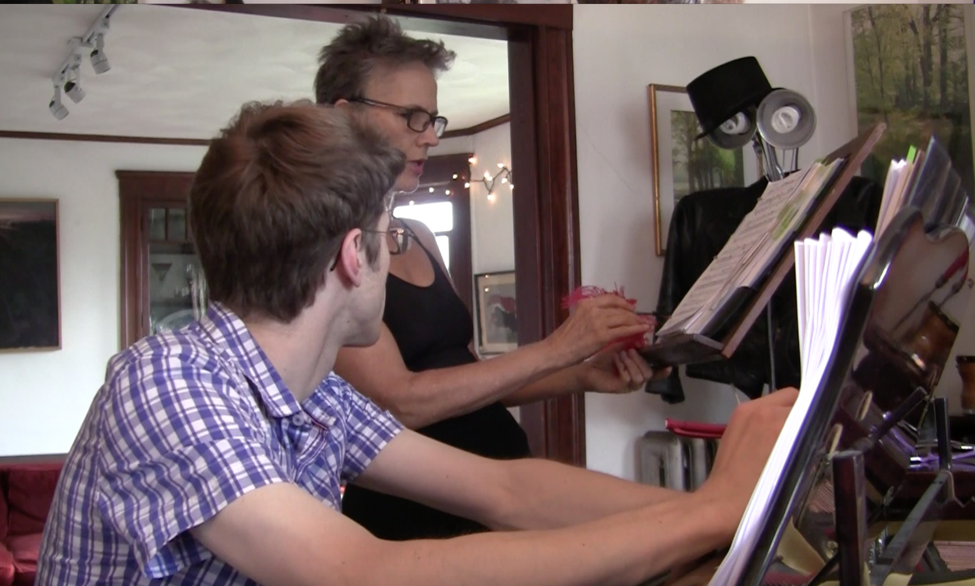 Because of that, we’ve gotten used to re-creating on the fly as a team. I often ask Tim to shift around the notes, try putting different parts of the music in a different order – or sometimes I sit down and try to show him what I mean, often just with physical gestures and singing – and then he translates it into actual notes on the piano, based on the themes he knows from the show.  We both add notes about what we did to the music, which I then add to the electronic copies of the manuscript before the next rehearsal.

And then we do it all over again.  It’s a kind of honing process.

Sometimes it get’s a little intense.  Yes, I’m strangling a feather here. And Tim is being elegantly tolerant. 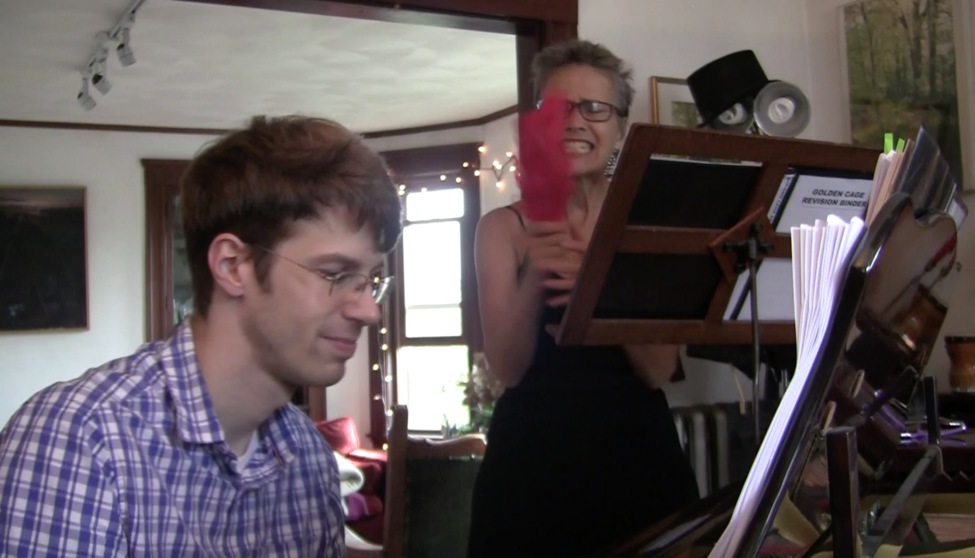 Here’s what I look like when I don’t like something I’ve written and I’m trying not to start yelling at myself.  I just have to write it in my notes and work on it later. 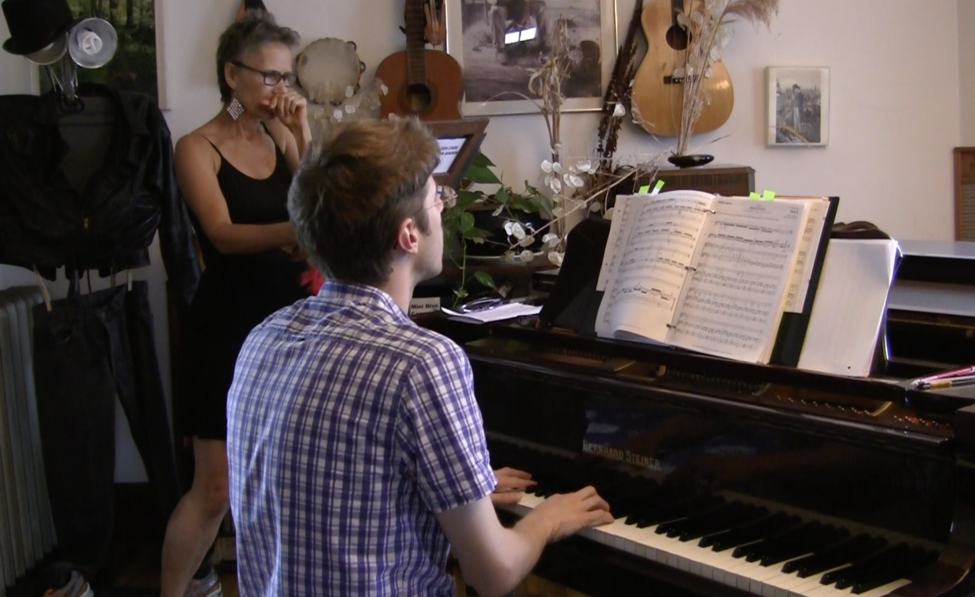 When rehearsal’s over I take photos of each of Tim’s pages so I can use any notes he’s written, along with my own notes to update the music, or write new sections.  His notes are generally way more legible than mine. 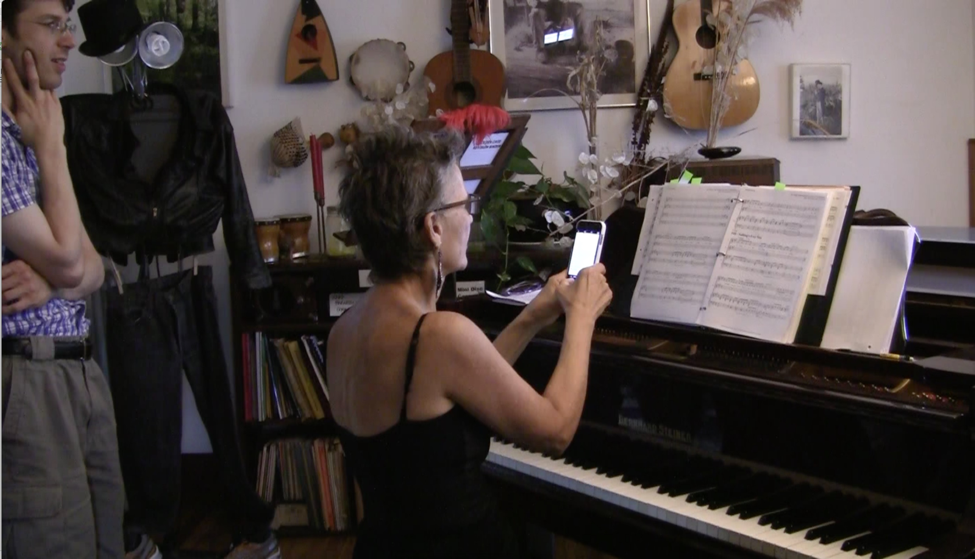 In between each rehearsal I have a grid I follow.

I update the score with the notes we’ve written, and compose anything we’re missing, using a grid my friend Larry Grogin helped me create. 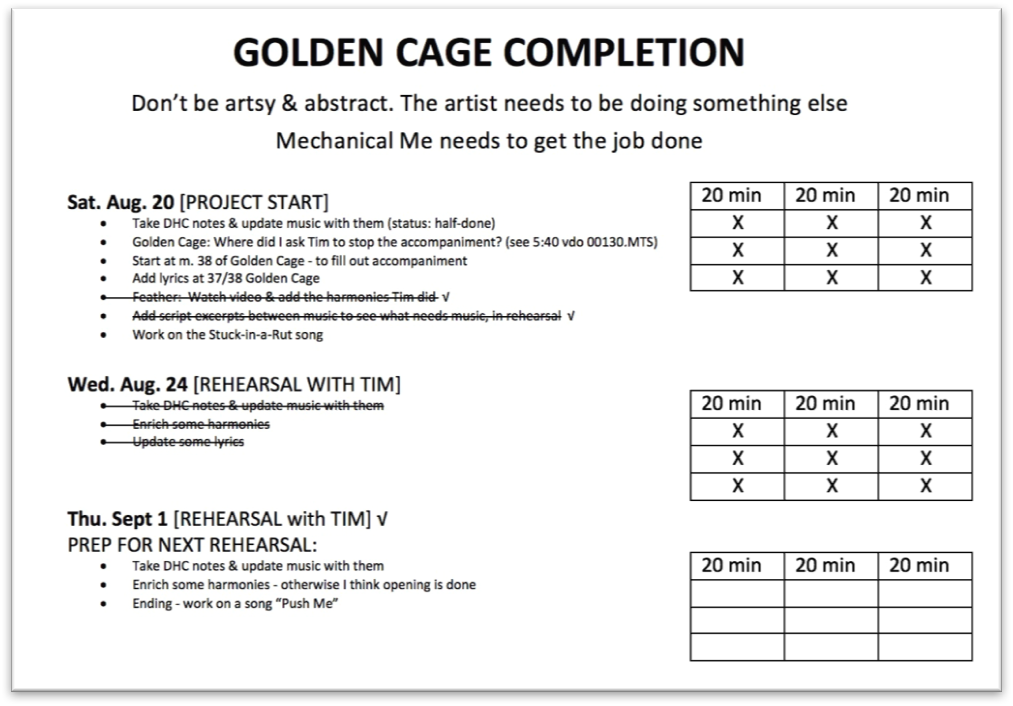 The work we’re doing now is to prepare for two upcoming readings.  I’ll be sharing the new opening and endings of the show at the New Opera and Musical Theater Initiative in mid-September and then heading down to NYC in early October for a private reading of the whole show with the core creative team, me, Paul Gordon and Nell Balaban.

All the work I’m doing now is based on a reading we did in NYC last April, along with script coaching sessions with Eric Webb (the “Deadpan Dramaturg”).

Then back to Boston for re-writes and a series of “pizza readings” in the fall – casual readings for very small audiences that simply let me experience the flow of the show in front of other people.

Oh, and for the pizza readings – I won’t be playing both parts.  Hopefully I’ll be sitting in the tiny audience watching my imagination unfold.

To sponsor a reading of “The Golden Cage” or come to a sponsored reading in the Boston area – let me know! Send me an email  and use “I want to come to a reading!” in the subject line.

If I don’t get back to you right away, please be patient — sometimes I fall down rabbit-holes – but I never mind if you email a second time to remind me.