You may think a librarian’s job is boring – but librarians share their world with the greatest stories of all time.

One of my favorite kinds of stories is the story of a lost passion that’s rediscovered — and finally lived to its fullest. 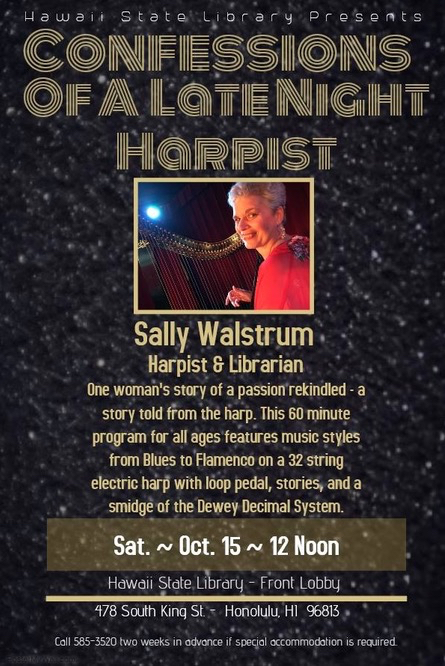 Librarian and harpist Sally Walstrum has a story like that. It’s her personal story of a rekindled life passion — and she puts it to music with her 32 string electric harp,  looper pedal  … and just a smidgeon of the Dewey Decimal system in her new show “Confessions of a LateNight Harpist” which is being debuted … where else but at the Library.

Sally Walstrum is a member of my Harness Your Muse Mentorship program and her yearlong project has been to develop this show, which shares the music and  stories of a woman who left her first passion to pursue a safer life — and then returned for the passion she left behind.  Now Sally is integrating these two parts of her life in a way she never thought possible.

This theme speaks to anyone who’s left a passion behind in order to create a safer life.

Is there anyone who hasn’t done that in some way or another?  I’ve never met that person.  For me it was composing musical theater – something I’m reconnecting to deeply now.  How about you?  What did you leave behind?  What did you always want to create, but just never got around to it? (I’d love to know!  Please talk about it in the comments.)

That’s what my Harness Your Muse Mentorship program is all about.  So if rekindling a passion speaks to you check out the info page and fill out the application – many people say that simply filling out the application gives them a huge amount of clarity about their own passions and where they want to take them (and don’t worry – there’s a box on the application you can check to tell me that you’re just filling it out for the experience)

ABOUT THE SHOW:  One woman’s story of a passion rekindled – a story told from the harp. This 60 minute program for all ages features music styles from Blues to Flamenco on a 32-string electric harp with looper pedal, stories, and a smidge of the Dewey Decimal System.

ABOUT SALLY WALSTRUM:  Sally came of age as a conservatory-trained harpist, steeped in the classics and the intense world of competition as a professional musician.  She left that world to become a librarian, and her harp fell silent … until, nearly 3 decades later, she sat down at her neglected harp and her passion opened like a beloved book. Sally is currently working with creative mentor Deborah Henson-Conant in the “Harness Your Muse”  program and has since developed – and performed –  her first solo harp concert in 35 years! She’s now working on a series of shows for concert and family audiences featuring her 32-string electric harp, looper … and stories of passion rekindled.

Go to the Facebook Event Page to wish Sally luck, and if you have friends in Honolulu, SHARE the event with them!