I started writing an outline of my life a few years ago for a TV producer who asked for an overview of my life.  Like a lot of the content I’ve created, it’s waited patiently on a shelf.  Last week was my birthday,  and I made a commitment to myself: this is the year the shelves are coming down.

Am I chronicling everything? Absolutely not.  But writing this I see the movement, the trajectory.  In my day-to-day thoughts, I can get fixated on the moments and places where I’m still stuck.  As I read this, I start to see the overall movement – and ‘right now’ starts to feel like a long conversation that’s just starting to get to a most interesting point.

The next year, I enrolled in the music program at my local Junior College (College of Marin), learned to read and write music – very slowly – and a year into my studies, when I was 22, I heard the college needed a harpist for the band.  Did anyone know how to play? My six lessons when I was 12 made me the top candidate.

OK, the story’s a little more complicated than that – but that’s the jist.

At 22, three things changed that made me see the harp differently:  my brain was ready for the structure of practice, I found a teacher, Linda Wood, who suggested I compose my own music – and I discovered that as a harp-player, I could make money to produce my musicals.  So harp became very interesting to me. 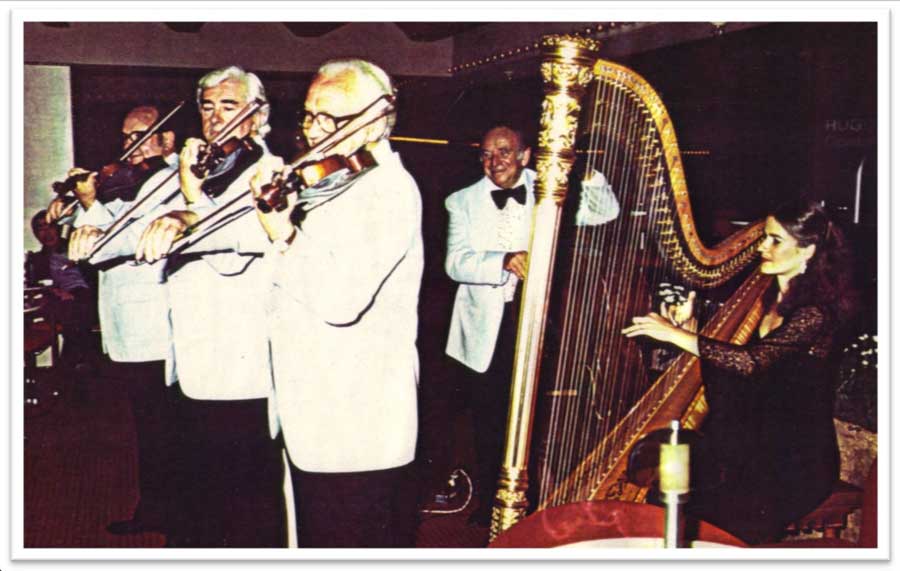 I also discovered that the way I could play music, by reading chords and improvising, was an incredibly fast way to develop repertoire.  I could basically create an inexhaustible repertoire on the spot – and once I got over the notion that it was a heinous cheat to do it that way, this skill suddenly gave me a way to make a living as a musician – and explore the art of improvisation at every moment.

I didn’t know it at the time, but I was setting myself up to create a rich foundation that I would later use to play jazz – and now, when I create programs to prepare other harpists for jazz, I start them the same way.

For the next 12 years I lived a triple-life: by night I played harp,  by day I studied music at U.C. Berkeley, getting a foundation that would help me compose the musicals, operettas, song-cycles and even the symphony pieces I’d later get a Grammy nomination for – and anywhere I could find time, I created and performed anything that combined music and story.

And the first piece I finished was the 2-person operetta/musical that had sent me back to school, “Dream of Waking” (later called “The Golden Cage”). 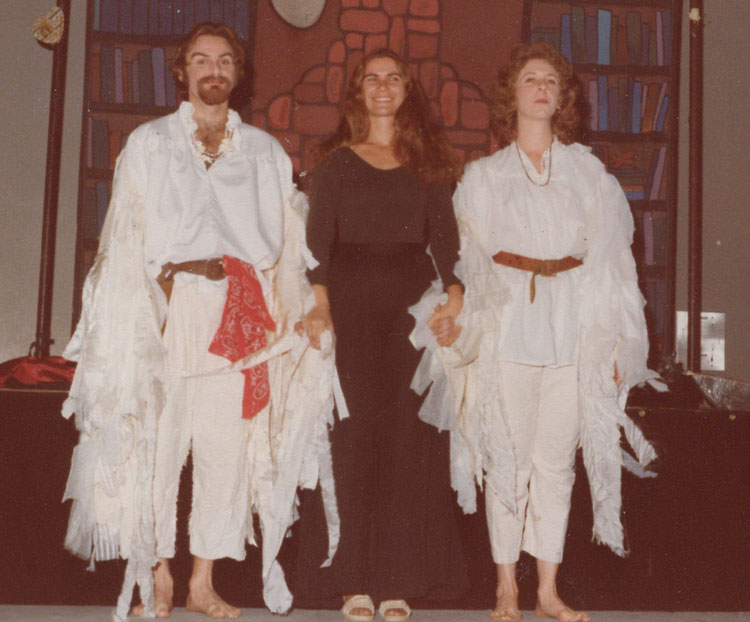 With the full cast of “Dream of Waking” (aka Golden Cage) – Robert Sicular and Wendy (er … forgot her last name). I suspect they didn’t get along well. I sure look happy … they look a little grumpy, don’t they?

The music and drama departments at U.C. Berkeley mounted a joint production of the piece, and afterwards, director Michael Jayson – a friend from my days at the Dance Palace in Point Reyes – suggested we self-produce it at a little theater in Berkeley – so we did.

On the street one day, I found a tiny pamphlet put out by the S.F. Mime troupe that described how to write a press release to get an audience to your show.  So that was the beginning of producing and promoting my own work – something I still do today, albeit with a lot more help.

The audience came.  We got good reviews.  But that little pamphlet didn’t say what to do next.  I didn’t know how to build off that success.

So instead, I wrote another musical, this time a one-person musical, called “The Letter,”  collaborating with my friend Gunnar Madsen and I also created a harp & cello duo with my best friend, Celeste. 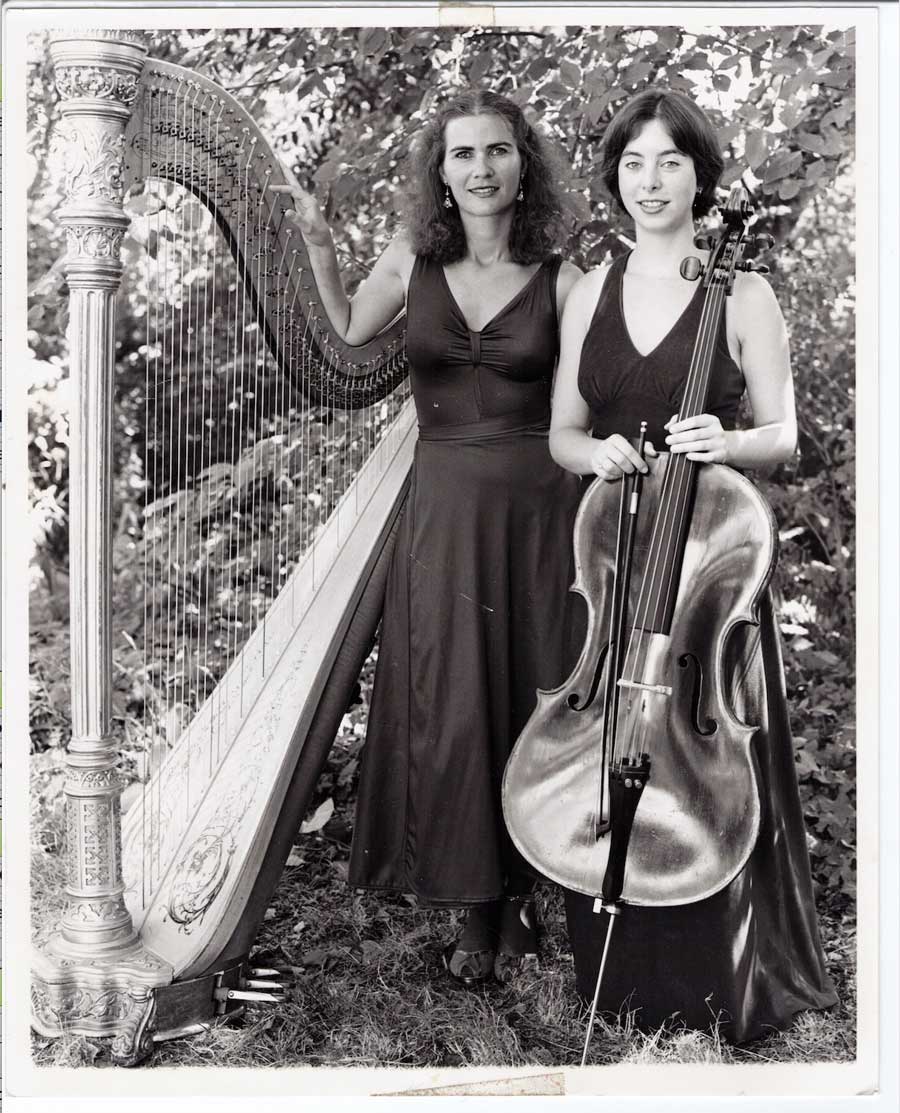 With my first band “Harp & Cello” with my best friend, Celeste. Living the rock-n-roll dream. (Photo by Evvy Eisen)

During this time, I was learning the harp.  At first I was keen to become a ‘real musician’ and I was grateful to my teacher for pointing me towards jobs with orchestras where, as a harpist, I’d sit in the back, count endless measures while the rest of the orchestra played, and then jump in with something I could barely wrap my fingers around. This is typically what an orchestral harp player does since most composers don’t really know what a harp CAN do.

Since my reading was still rudimentary, I’d get the orchestral scores from the library, learn the whole piece and plot out exactly where I’d be coming in, and basically memorize it.  Since my playing was still rudimentary, but I’d been composing all my life,  I would look at what the other musicians were playing during any passages for the harp, and rewrite my part (forgive me Tchaikovsky).  I’d think, “Well, hey, the cellos are playing that left-hand line, they don’t need ME to do it.  I”ll just double up on this right-hand line instead – it looks way more important.”

I would rationalize this, in part by telling myself that Tchaikovsky was probably very busy at the time and didn’t have time to really think the harp part through.  So I’d just do it for him.

I also decided that this was a very bad place for the harpist: at the back of the orchestra.  I thought it would be much better to be in front of the orchestra, or in the midst of a chamber ensemble where each instrument had a more individualized voice.

That image would become a huge part of my life later on – but for the moment I started writing a series of works for chamber ensemble, both as a musical adventure, but also as a way to spend time with people I loved: my aunt Gloria, and my best friend Celeste.  Gloria is a soprano living in NYC and Celeste is a cellist, so all the work I wrote between 1981 and 1985 had soprano and cello at the center of it – writing not so much for chamber ensemble, as for Gloria, Celeste and me – adding other players as needed. 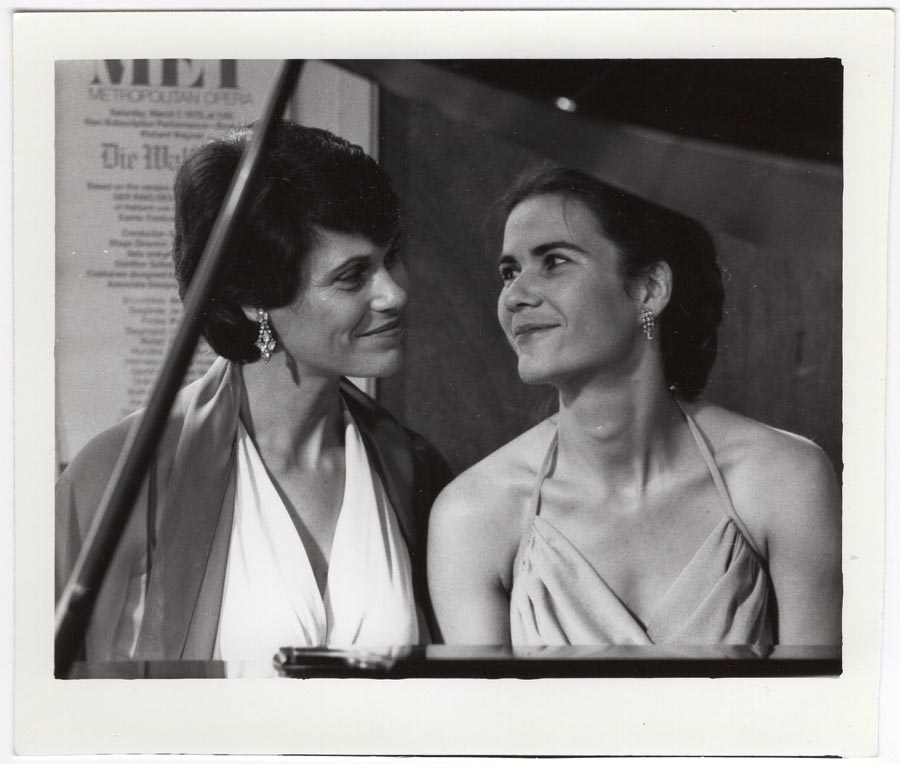 With my lifelong muse, my aunt, Gloria Hodes. Can you tell I adore her?

That included three concert works for soprano and chamber ensemble that we premiered in NYC (two of which were recently performed in a project called “Mythic Woman” at Boston University).

They all focused on taking mythic stories and retelling them from inside the woman’s head.  In “Persephone Lost,” a one-woman opera for cello, harp, clarinet & soprano, I told the story of Persephone’s abduction to the underworld  as told from her mother, Demeter’s standpoint.  In “Songs of the Pyre” a 5-movement song cycle for harp, cello, piano and soprano,  I told the story of a woman convicted of witchcraft.  In a series of folk song for harp, cello and soprano, I retold three European folk songs I’d heard my mother sing – but from the standpoint of the woman in the story – not just what happened, but why she did what she did.

Through all this I played ‘background’ harp to support myself and my projects.  I played harp in dining rooms, in restaurant lobbies, with strolling violin groups, and until I left for New York, Celeste and I continued to play weddings and parties in the S.F. Bay Area.

I moved to NYC, then to Boston, following my boyfriend, Lawrence, who was in medical school at Harvard.  Everywhere I played, I’d go to the piano-bar on my break and watch the jazz pianists. 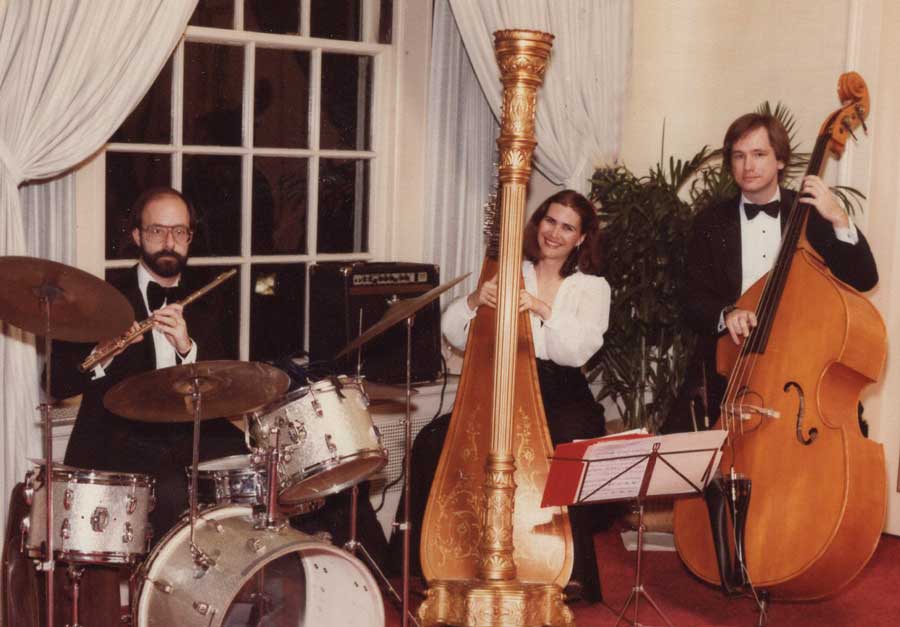 The Jazz Harp Trio at a private gig – looks like it’s at the Ritz Carlton in Boston. Bob Stoloff on drums, flute and wicked good scat vocals, me on harp and Peter Kontrimas on bass.

I began to understand that the improv skills I’d learned as a kid, and that I’d used to ‘cheat’ my way into a harp repertoire,  were the foundation of Jazz. I’d suspected it before, when a friend introduced me to Chick Corea – and told me that kind of music was impossible to play on the harp – which was exactly the kind of thing that made me want to do it.  And when I fell in love with a jazz bass player named Peter Kontrimas in the Boston area, we started a duo and he became my full-time jazz teacher.  With no minced words, he showed me how to stop walking all over his bass lines, how to crisply comp for his solos, and how to start soloing in a jazz

I was starting to understand the interplay of structure of freedom that would become the foundation of all the teaching in my Hip Harp Academy I created years later.

Peter also taught me how to listen to jazz – not like a composer – but to let it get way below the skin.  In 1986, we added a drummer to the group, became the “Jazz Harp Trio” and started performing around Boston.

I hired a publicist, started spending as much time sending out press releases as practicing, and the band became a regular at the local jazz clubs, got well-reviewed in the paper, and made two recordings.

It was time to hit the big-time  …

And I was back at square one.

Previous & Next in this Series (Subscribe to this blog to get notification when they’re published):

Next in the series:

Nov. 11 – Dec. 11 is my birthday month.  I’m celebrating with a bunch of adventures.  Here are two I want to share with you:

FOR EVERYONE: The song I wrote myself for my 40th birthday (yup, it was a tough one), called “Congratulations, You Made it this Far” – including a link to download the song for free.  Enjoy!