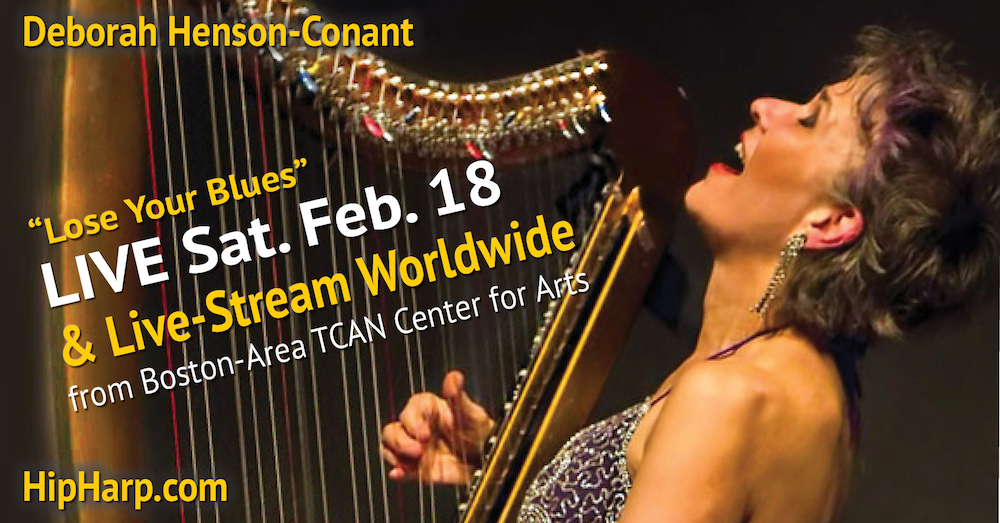 There are TWO ways to come to the Show
on Sat. Feb. 18th:

Then – whether you come live or Livestream, get on the Artist’s Call List for replay clips & post-show goodies!

“Virtuoso out-of-the box harpist…known as the rockin’ bad girl of the harp world. She took the ancient instrument off its pedestal, cocked it on her hip, and made it play everything…” -NPR: On Point

Grammy-nominated electric harp legend Deborah Henson-Conant (“DHC”) brings her riveting performance style back to TCAN before heading off to the UK and Hong Kong. Her shows combine music, humor, stories with a range of musical styles that fuse Blues, Flamenco, Jazz, Musical Theater and straight out inspirational.

DHC is making a rare Boston-Area appearance in early 2017 before heading out of the country – at TCAN (The Center for Arts in Natick)  Tix are $26 ($24 for TCAN members).

The Audience Tells You What to Expect at the Show

Her voice has been compared to Carly Simon and Joan Baez; her playing to Chuck Berry and Jimi Hendrix; and her humor to musical comedian Victor Borge and Eddie Izzard. And then there’s the harp…

For over two decades, DHC has collaborated with the world’s most cutting edge harp company, CAMAC harps in France, to develop what’s become the most popular electric harp in the world, a 32-string carbon-fibre wearable electric harp that’s named after her, the “DHC” – the instrument you’ll see up close and personal on the stage at TCAN.

“Reshaping the serenely Olympian harp into a jazz instrument by warping it closer to the Blues.” (New York Times)

“Her gorgeous storytelling is as theatrical as it is musical.” (Boston Globe)

The Press Says it All

DHC has toured her solo show throughout the US and Europe, and performed as a symphony soloist with orchestras like the Boston Pops, Baltimore Symphony, Pittsburgh Symphony.  She’s opened for Ray Charles at Tanglewood, toured as a member of guitar legend Steve Vai’s band, headlined at the Edinburgh Fringe and jammed onstage with Bobby McFerrin, Steve Vai, Mason Williams – and offstage with Steven Tyler and Sharon Isbin. She’s appeared on National and international media from the Joan Rivers show to Charlie Rose.

“…this sassy dame can make her harp howl like a tortured Stratocaster, or strum out Mexican cantina music, or swing like Brubeck…  (The Scottsman)

Her collaborative cross-discipline improv project “Inviting Invention” was featured at the Cambridge Science Festival, her one-woman musicals have been featured at festivals and theaters from the Kennedy Center to the Chicago Humanities Festival and her concertos are performed by symphonies and chamber ensembles in the US and Europe.

A night with DHC is a chance to be in the center of creative invention, with an artist who continues to reinvent her style, her music and even her instrument – a composer, performer and creative coach who mentors artists around the globe in her “Harness Your Muse” program, and trains hundreds of harpists in improvisation skills through her “Hip Harp Academy” virtual group learning programs.

“It’s her dazzling range and depth of technique, combined with a warmly engaging energetic stage manner, that ultimately makes this such a memorable show …” (SW Metro – Edinburgh, Scotland)

See her once and you’ll never look at a harp the same way again.

Use the share buttons below  – each lets you add your own message and send people right to this page.