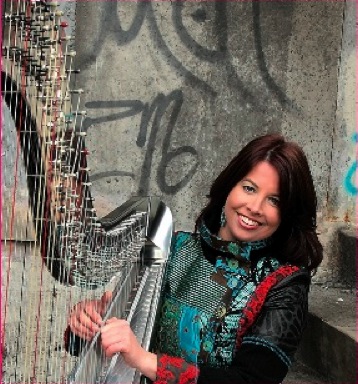 I was excited to hear that Sabine wanted to add a few creative flourisheds of her own.  I asked her to write the story of how this musical adventure came about.  Here’s what she wrote:

I was asked to be harp soloist with the Altea Ensemble, because they wanted a special instrument featured in their upcoming concert.

I wanted a program that will feature my new custom-painted chrome 44-string CAMAC acoustic-electric harp. We knew we wanted to program “Debussy Dances” and I wanted another piece to feature harp in a contrasting style.  I immediately thought of “Baroque Flamenco” as I have already learned the cadenza and worked with Deborah [Henson-Conant, the composer] several times in performance workshops.

We licensed the parts and score from Deborah, and because this ensemble has different instrumentation, she also sent us the “Finale” source files for some of the instruments so we could change them.  So, for example, we changed the “Oboe” parts into “Saxophone” parts by transposing them into Bb.

“Baroque Flamenco” is a harp feature – but the orchestra ALSO includes harp. The orchestra harp part is, of course, much simpler.  I wanted to involve more of the harp community in the piece, so instead of having just one orchestra harpist, I invited THREE harpists to play in the orchestra, they are all students of the Music School, BplusC, in Leiden that is organising this event. Denise van Abswoude (15) is first harp, and plays the concert harp, her two wing-women on slightly amplified lever harps are Nelleke Louwe-Kooijmans (44), a huge Deb-Fan who participated in Deborah’s performing workshop in Maine two years ago and Yara van Boven (16), who recently studied the solo lever harp part of the Baroque Flamenco.

As a teacher this project gives me the chance to introduce my students to orchestral playing, and of course it’s very exciting to the audience to see more harps on stage.  It also helps fulfill the mission of the composer, which is to increase the visibility of harps in concert and expand the way most people think of harp music. It’s also a unique project for the Music School since it is a collaborative project between the classical and jazz department. And last but not least, I am very excited that the debut of my new harp will be the Grande Finale of the evening, with such a great piece as the Baroque Flamenco, accompanied by the enthusiastic young talents playing under the lead of Johan Top (director classical ensemble) and Anja Nielsen (director Jazznonet).

The performance was at Vredeskerk, 2nd of April, 7.30 PM.

BRAVA, SABINE!! from me, Deborah

COMPOSER/TECHNICAL NOTE:  In fact, CAMAC harps altered the design of their early-model acoustic-electric harps specifically for this piece.  Originally, those harps included only individual string piezo pickups, but when I composed and began performing “Baroque Flamenco,” CAMAC added a special sound-board pickup to the harps to amplify the percussive aspect of the piece.  Thank you CAMAC!!