Electric harpist Deborah Henson-Conant, who typically performs in formal concert halls and theaters, is taking her instrument out of its ‘natural habitat’ and onto the streets of Harvard Square. While she plays, she’ll be street-tweeting, posting, and encouraging pedestrians to do the same.

She says that the point of this project is to be where people DON’T expect her to be.

“When you go to a concert, you expect to see the artist on stage,” she said. “It’s like going to a zoo and expecting to see a giraffe. There’s no surprise. But if you see a giraffe on the street, there’s something magical about it. It wasn’t planned, it’s not repeatable – and it wakes you up.”

Henson-Conant came up with the idea after returning home to the Boston-area from some very successful shows in Seattle area. “We tried new, more community-based ways of reaching the audience there,” she said, “And not only did it work well, it was a lot more fun.”  She realized she could do something similar to promote her May 7th Mother’s Day Eve show at the Regent Theatre in Arlington  – being much more interactive, by literally taking to the streets. 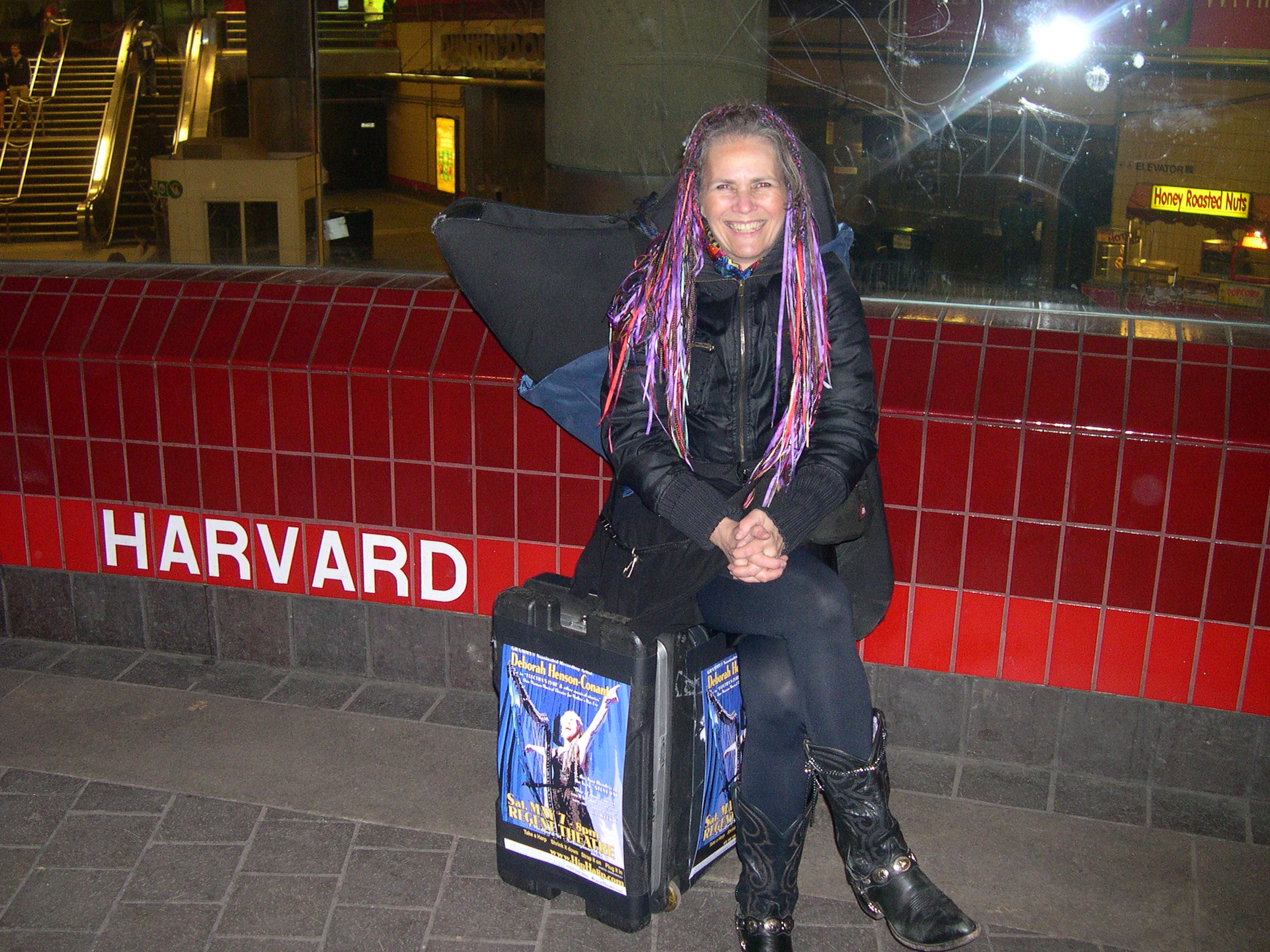 Unlike other street musicians, or “buskers,” Henson-Conant won’t focus on collecting donations. She says she considers her outdoor performances a kind of “reverse-busking.”  “Instead of giving me money, I want them to take something:  the flyer for my May 7th show, a photo to post on Facebook or Twitter and a new experience.”

“I love showing people the instrument,” she says, “because it looks like something out of a fantasy story.”  Invented for Henson-Conant by Europe’s top harp builder, her instrument is a hybrid of guitar, harp and racing-bike technology with airbrush designs “by a guy who usually does motorcycles and trucks.”

Inspired by her recent workshops for both adults and children on the West Coast, Henson-Conant realized that connecting with people one-on-one is a powerful experience.  “Most people have never seen an instrument like this, much less gotten close enough to touch it, but on the street” Henson-Conant says, “you can have that one-to-one contact that’s not possible in the concert hall.”

And if those people come to the show, Henson-Conant says “Imagine an audience of people I’ve personally met on the street, people who’ve touched the instrument, seen it up close, know something about how it works.  The experience will be so much richer for them and for me, both. That would be one very special audience.”

Deborah Henson-Conant is known for mixing theater and music in styles from Flamenco to Blues. She’s opened for Ray Charles at Tanglewood, toured with the Boston Pops, jammed onstage with Bobby McFerrin and offstage with Steven Tyler, premiered her works with ensembles from the National Symphony Orchestra to the Prague Radio Orchestra and starred in two music specials on PBS. She’s won grants from the NEA and “Meet the Composer,” and a GRAMMY® nomination for crossover classical project “Invention and Alchemy.” She’s been interviewed by Scott Simon, Charlie Rose, Studs Terkel, Joan Rivers and featured in stories on NBC, CBS, CNN and NPR and yes, the Food Network.

FOR MEDIA INQUIRIES and more information about Deborah’s May 7th performance at the Regent Theatre in Arlington, MA contact: Michelle Roche – michelle@michelleroche.com / 706-353-3244