A Week in Wales

Wow! What a week in Cardiff, Wales! I had such an amazing time at the CAMAC Cardiff Harp Weekend and the mini-retreat for the folks in my “Harness Your Muse” mentorship during week that followed.  Here are some photo and video memories to give you a sense of the fun we had.

AT the CAMAC HARP WEEKEND

The Great CAMAC “DHC” Pluck-Off
Shelley Fairplay and I gave a workshop on sound equipment and the electric “DHC” harp, and the culminating moment was the big “Pluck Off” where harpists from all over the UK and beyond tried on the harps and played with the gadgets.  Here are some of the photos with harpists Georgia Garland, Sophia Staniforth, Niamh Flynn and Katie Williams, Emma Graham, Tess Nurman … and oh, I think I may have forgotten someone (if it’s you, please let me know!) 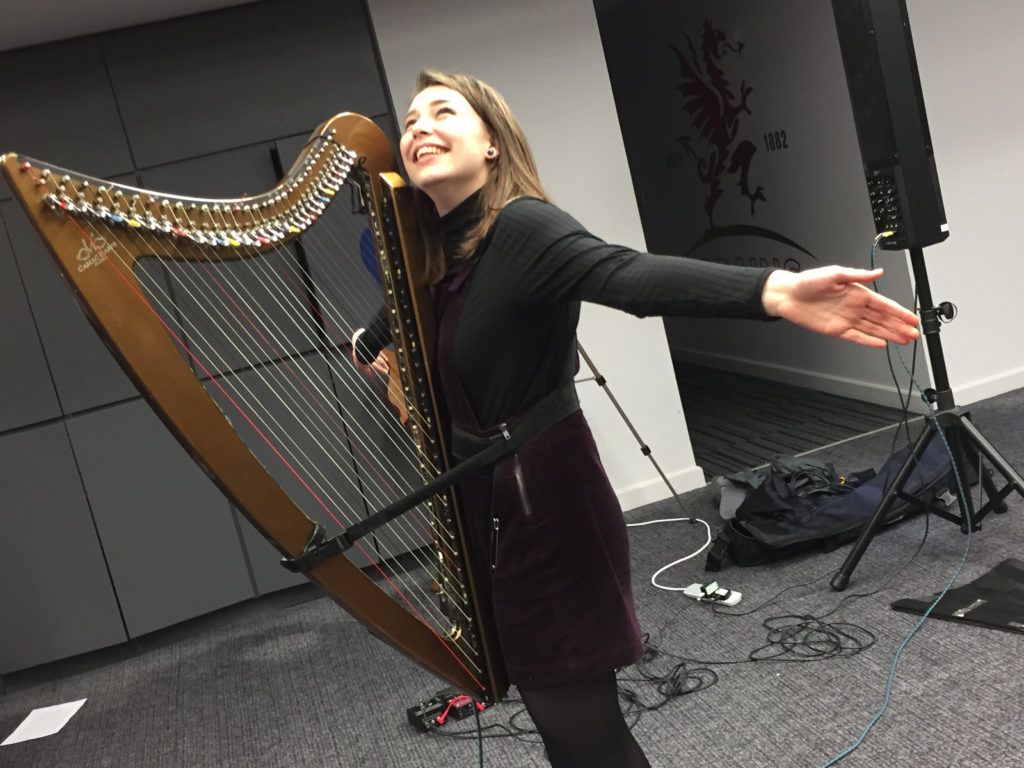 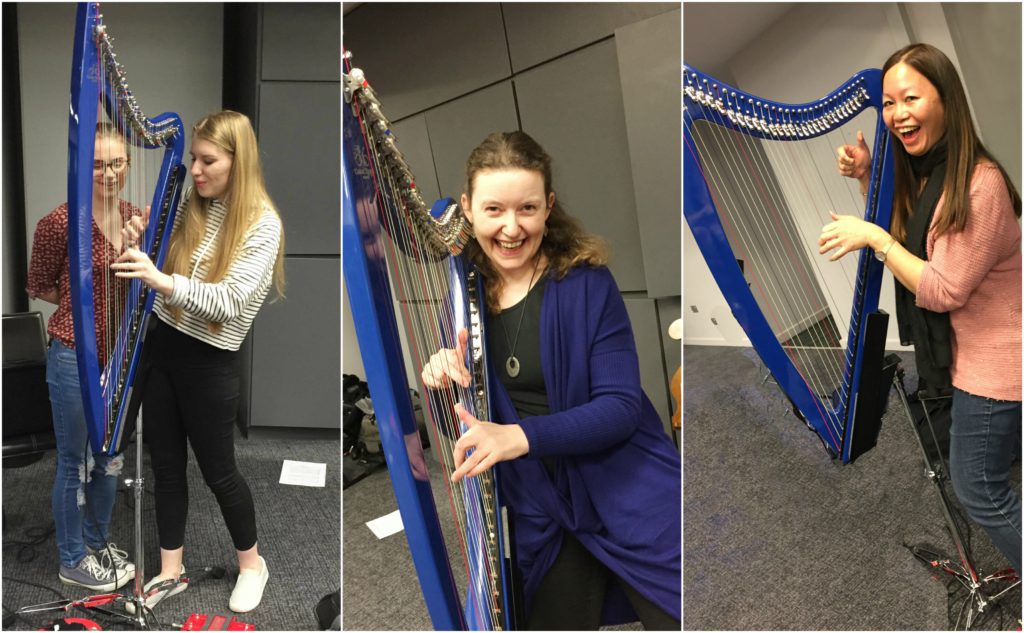 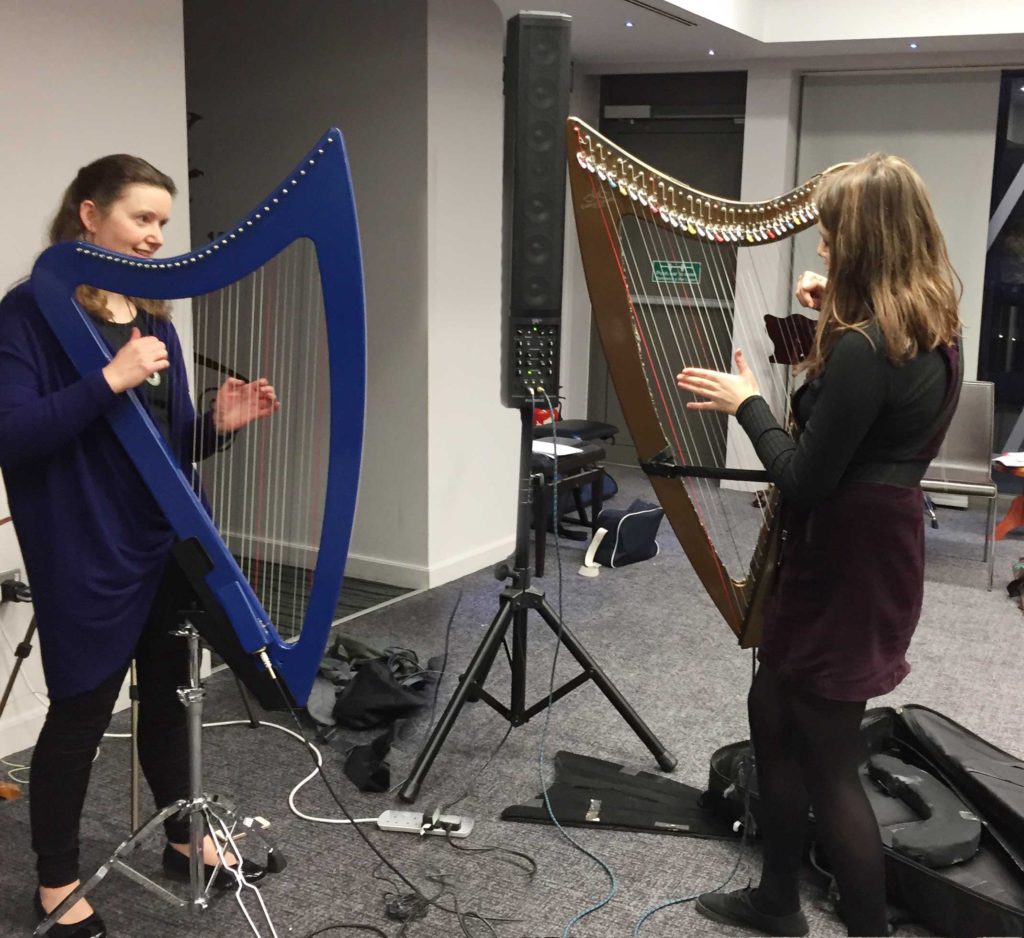 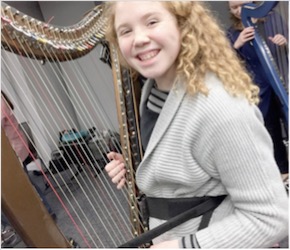 Debut World Harp Ensemble
Shelley Fairplay’s wonderful “Dynamic Harps” harp ensemble joined with workshopping harpists at the CAMAC Cardiff Harp Weekend to create a masssive harp choir who sang and played with me on my song “You Have a Voice” with the audience singing as well.

The rehearsals, the concert – it was all so moving to hear harps and voices raised together in this piece about how the human voice “is the sound that turns lost into found” – and so incredible feel the wall of music surging behind me as I sang and they played and sang along.  You can see me conducting here, at the harp — The power of raised voices in harmony – so beautiful! 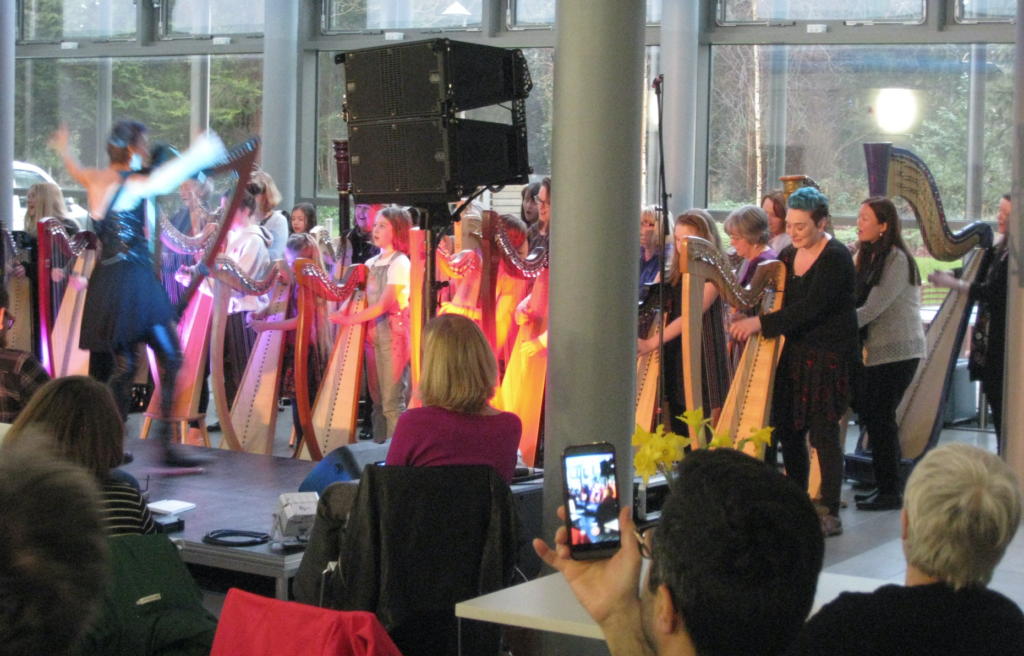 Back at the great DHC Pluckoff I’m feeling the rapt attention of the audience AND my trusty assistants,  Imme Jansen-Toft and Rowan Hawker as I talk about sound systems, signal flow and electric harps. 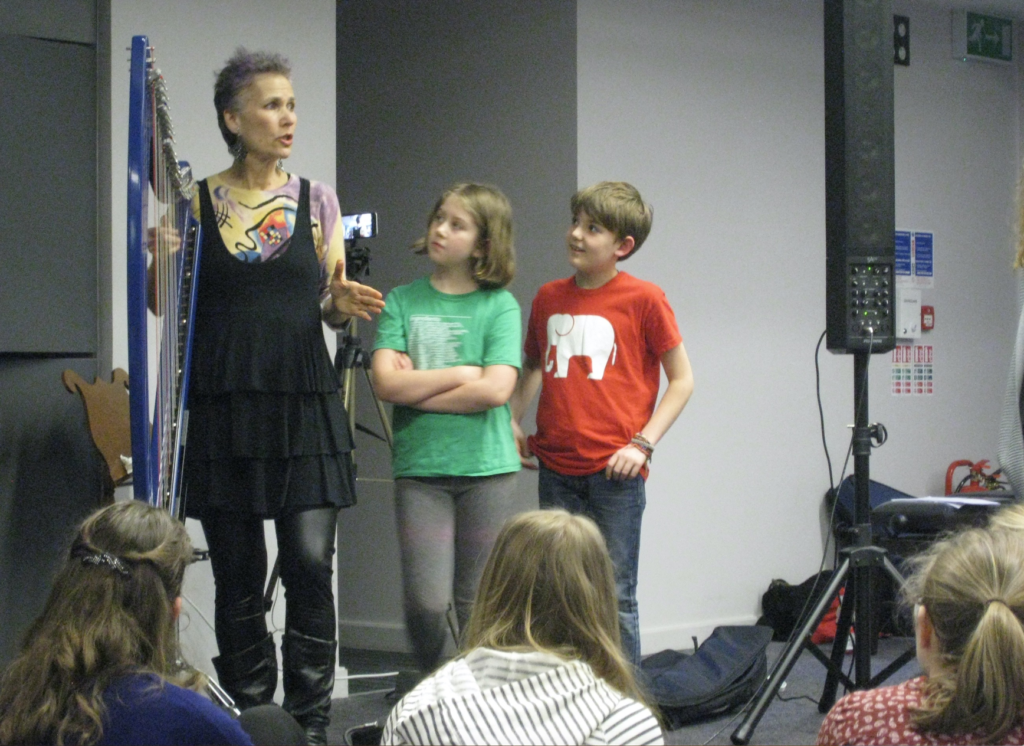 Spontaneous Duet
For years, Jakez Francois, the head of CAMAC Harps, has played my piece “Anna Bella” – and each time I love it – but this time, after seeing him join harpist Tara Minton for a duet the night before, I asked if he’d join ME on stage to play the piece together, so harp-on-harp, with me playing the “DHC” electric body-harp CAMAC and I have collaborated on and he playing the big Blue electric harp, we played the first-ever two-harp version of “Anna Bella” in the concert Sunday night. 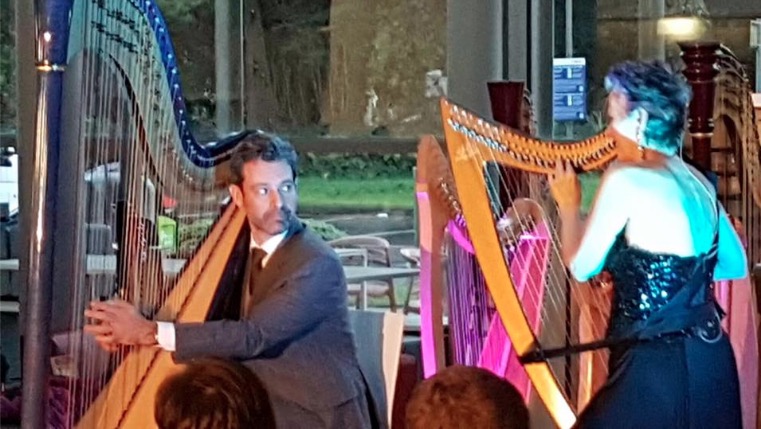 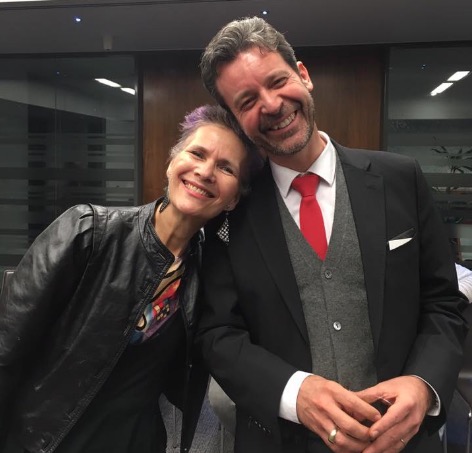 DHC Signing DHC’s
As if it isn’t cool enough to have a harp named after you, I had requests to SIGN the harps of people who’ve bought them, along with the new poster of the “DHC” harp.

VIDEO! RAW FOOTAGE FROM THE WEEKEND!
Cutting edge harpist Eleanor Turner – has a new “Myospat” technology that lets her change the timbre, the octave and other qualities of her harp sound by controlling the sound AFTER she plucks it with a digital armband, and by moving her arm or squeezing her muscles. She let me try it during a workshop run by CAMAC Cardiff Wales – and UK harpist Emma Graham caught it on video.

You can see more about Eleanor’s use of the Myospat technology HERE and read more about this technology and its developer HERE. You can see Eleanor Turner and me HERE in 2014 in Sydney Australia as Eleanor premiered the chamber ensemble version of my concerto “Soñando en Español” while I conducted.

AND THE WEEK THAT FOLLOWED

Who Wants CAKE??
At a performance workshop for Shelley Fairplay’s “Dynamic Harps” group, not only did we play, and play and PLAY on over 20 harps … but they made me a CAKE … AND gave me a Welsh love spoon, hand-carved and guaranteed to bring ever more love into my life. 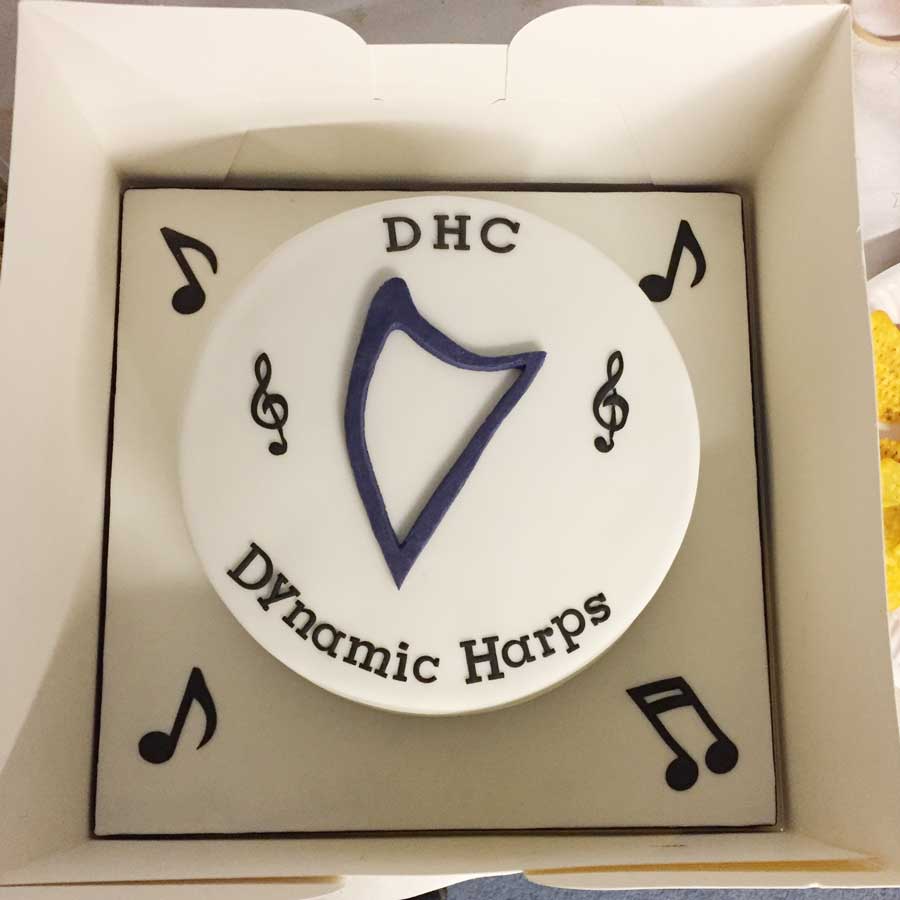 “Harness Your Muse” Mini Retreat
When I realized that there was a whole “European Contingent” in my “Harness Your Muse” mentorship program, I decided to do a mini-performance retreat for them in the UK instead of having them all fly here to the US.  Harpist Shelley Fairplay hosted the event, and we met for sessions, coaching, masterminding, walks and far too many cakes and pastries for 4 days in Cardiff. 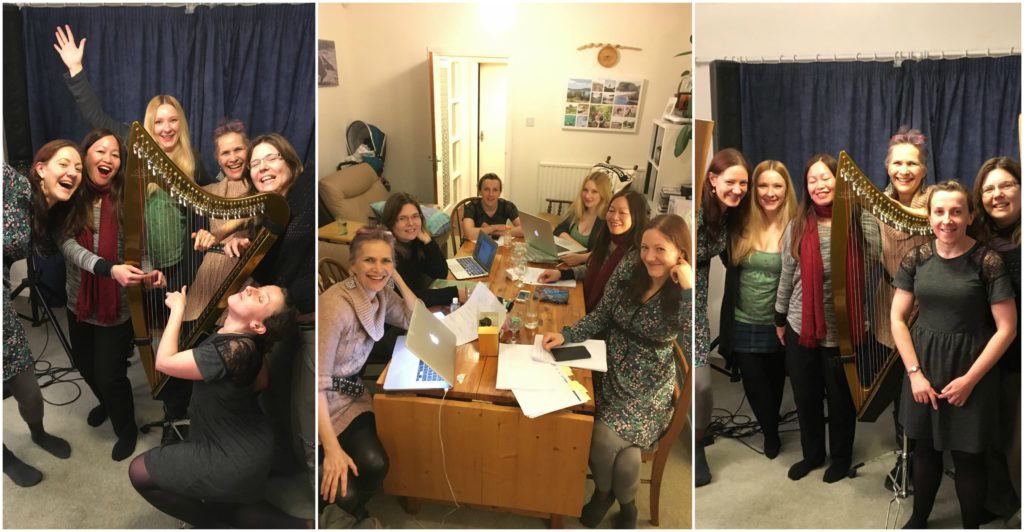 At the Airport
The flight to Boston (via Amsterdam) was leaving at 6AM from Cardiff. That meant getting up at 3:30 to arrive at the airport by 4:30 (Thank you, thank you Shelley for above-and-beyond driving me to the airport in the dark!).  Here’s my harp, legs and bags at the check-in. 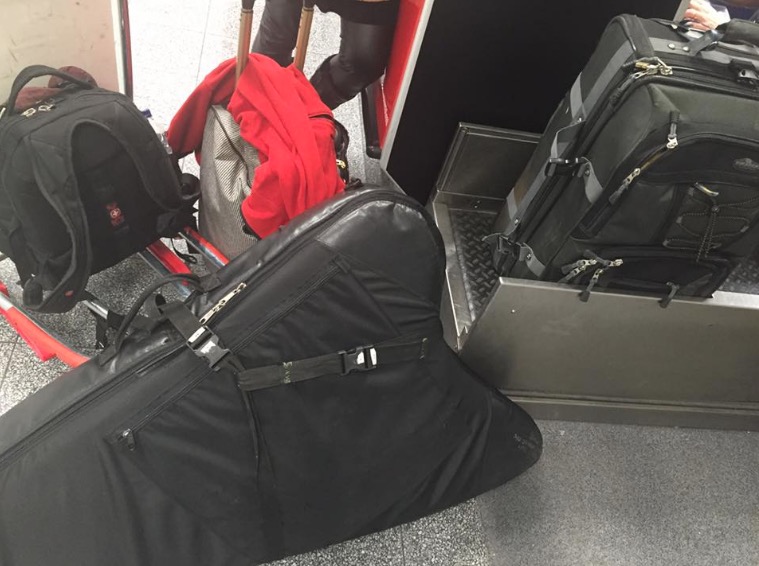