Using the clock to force ideas out of hiding

A blog about artistic process – creating “Electra’s Lyre” for May 7 Neil Gaiman and friends created a 6-song album from start to finish – including writing the songs – in 12 hours.  The project was called 8in8 since the original plan was to create 8 songs in 8 hours.

The result was an album of roughly mixed songs which were inspired by sometimes haiku-like Twitter responses to tweeted questions by Neil Gaiman. It was rough, but it was a “thing” – meaning, by the end of the project something existed that hadn’t existed before, and it’s likely that at least one of the songs invented during the night will go on to have a longer life in another album or project. 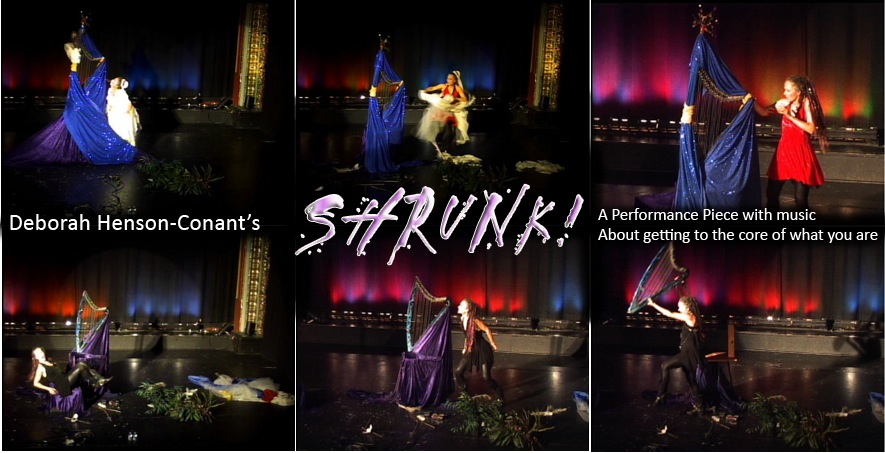 "Honey, I Shrunk the Harp" - quickly created in November 2010

This is a form of creativity I call “CAPTURE” — versus “CRAFTING.”  It uses time constraints to flush the muse out of hiding instead of painstakingly courting her. I think of it as the difference between a hunter-type artistic model and a builder-type model.  Ultimately I think the two can work together, but that means accepting the rough gem for awhile.

This idea of forcing oneself into an artistic corner in order to capture art is something I’ve always been interested in, and experiment with a lot, especially in my last two mini-one-woman-show projects.  My own process is to start with a title, publicize the show and then write and rehearse the piece in about 3 weeks.  The first was called “Honey, I Shrunk the Harp!” which I performed in November, and the 2nd is called “Electra’s Lyre” which I’ll perform this Saturday at the Regent Theater in Arlington. 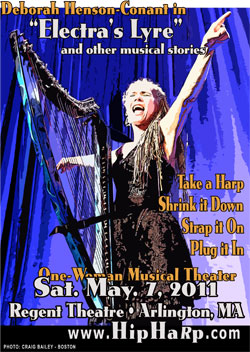 This way of working creates a special relationship with the audience, since they become part of the birthing of a piece. When I present a new work like this, I like to keep it to about 15 or 20 minutes, and present it in the context of a full show, so that the audience gets to really see the difference between new, rough, works — and polished pieces I’ve been performing for years.  That experience is important – it’s part of the value of live performance – that rawness and insight into the process.

For me, the artist, there are other advantages.  The format forces me to go with my first impulse, which is often the strongest. It forces me to stretch out of my comfort zone as a performer — and maybe most importantly for me personally – it forces me to reach out to other artists for coaching and collaboration.   In “Honey, I Shrunk the Harp!” in which I literally shrunk the harp on stage during the show, I got huge help from mime-dancer Karen Montanaro,  physical comedian Alex Feldman and composer-colleague Steve Murray.  For “Electra’s Lyre” I’ve been working with Alex Feldman again, and with dramaturg Mary-Ann Greanier.  And I meet monthly for critique sessions with the ‘Advanced Writer’s Lab” of the “New Opera and Musical Theater Initiative” (NOMTI).

My general process is this:

•    Title: I come up with a title that I think is funny or intriguing
•    Research: I start working that title – either researching it on the web or just playing with the ideas
•    Costume: I go to my local costume shop and get something, anything, to help me create the character
•    Script format: I FORCE myself to make my amorphous idea into a document that looks like a script – meaning it’s in script format, so even if you didn’t read the content, it would appear to be a script, with dialog, stage directions, songs – all in standard formats.  This idea of making it ‘look’ like a script I learned from the book “How to Write a Movie in 21 Days.”
•    Get help: I FORCE myself to give that script to someone who will be coaching me and let them read it, even though I’m cringing the whole time.
•    Get more help: I take the script to the Advanced Writer’s Lab at NOMTI, and, as embarrassed as I am, I read it and/or act it out for them.  They follow with a critique session which is always illuminating and often leads to big changes in the script or the idea as a whole
•    Get even more help: This time I’m even in a more serious collaborative relationship, since I’m working on the show with dramaturg Mary-Ann Greanier, so we’re in contact daily, as she reads each draft, comments, questions and suggests ideas.
•    Write blurbs & publicize: Meanwhile, I publicize the show, write press releases, create posters and postings about the show — and creating those “blurbs” often helps me focus what the show is truly about
•    Make sets: I FORCE myself into my studio to build some kind of set that will bring the show alive for me
•    Get Direction: I beg my director-friends to spend time with me working through the show – even if it’s just a half-hour –  either in person or on the phone
•    Rehearse: I rehearse it in the theater (and videotape it), thanks to the kindness of the Regent Theatre in letting me rehearse the week before the show
•    Chronicle: I videotape and review as much of my work as possible, from the first ideas to the show itself
•    Ask people I love and trust to run tech: Both in “Honey I Shrunk the Harp” and “Electra’s Lyre” my step-son and husband are involved in running tech.  Having them involved, knowing they’re ‘watching my back’ lets me relax that part of my brain on stage.
•    Kick myself:  There’s always a point where I think, “What was I THINKING???  How did I get myself into this??? I’m going to TOTALLY HUMILIATE myself this time for sure.”
•    Walk onto stage: I take a deep breath, go on stage and perform it

In the end, I have a mini-one-woman-musical.  It’s a new piece of work, which I’ve performed and videotaped and will then take to a director.  Rough? Yes.  A real, new, never-before-existed thing?  Yes.

And what amazes me most about the process is that in each case I started with a fairly arbitrary title – yet as I research and develop the piece over this short period of time, there comes a moment when I realize the subject has a profound meaning for me. I’ve built a trap to capture the art – but the art captures and releases something in me.

Electra’s Lyre will be featured on my Mother’s Day Eve show at the Regent Theatre in Arlington.  More information & tickets here.