Ute’s “In the Wings”

I originally wrote my one-woman show “In the Wings (or “What the Hell are you Doing in the Waiting Room for Heaven??”)” in 2008 for a premier at the the Central Square Theater in Cambridge. A year later I performed it in a full-cast version in Seattle.

After that – as happens with a lot of creatives – I went on to other projects and the script sat on the shelf, though I perform many of the songs from it in my solo shows.

But now this one-woman show is emerging again with a new one-woman, Ute Gfrerer, an incredible actress/singer who is bringing a whole new dimension to the main character.

“In the Wings” is the tale of Aubrey Gruber, an After-Life Coach who trains new recruits for the Heavenly Choir. When serious technical problems disrupt the auditions one night in the waiting room for heaven, Aubrey stalls for time by reviewing basic celestial protocol – and discovers she has way more inner demons than any of her recruits do (Sample lyrics: “Why is procrastination bad and patience good? / You’re still not doing something when you wish you could.”)

As Ute and I work on the script together, part of what’s fascinating is how to take a character I originally developed for myself, and open it up for a very different performer.   Here are some screenshots from today’s read-through of the script as we shared reading the dialog, songs and stage directions and discussed possible changes. 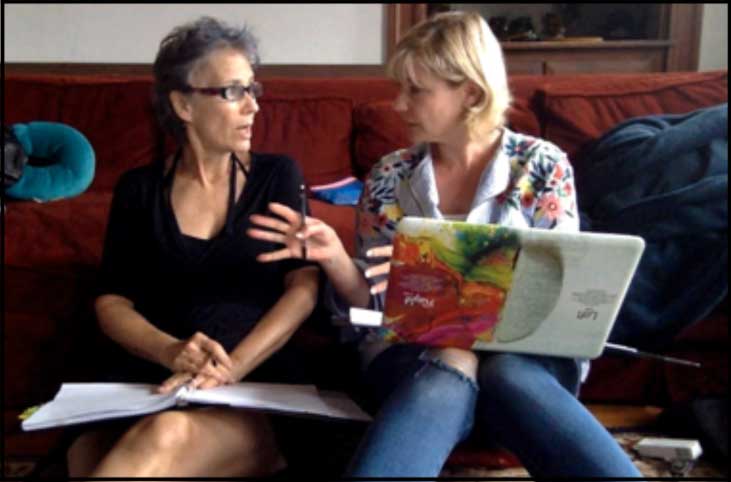 (ABOVE: Discussing ways to make the action in a scene work) 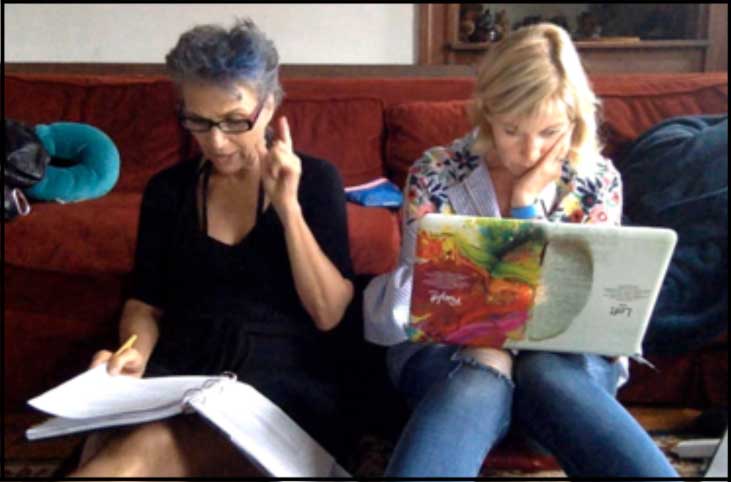 (ABOVE: I read Aubrey’s lines as Ute looks through the stage directions) 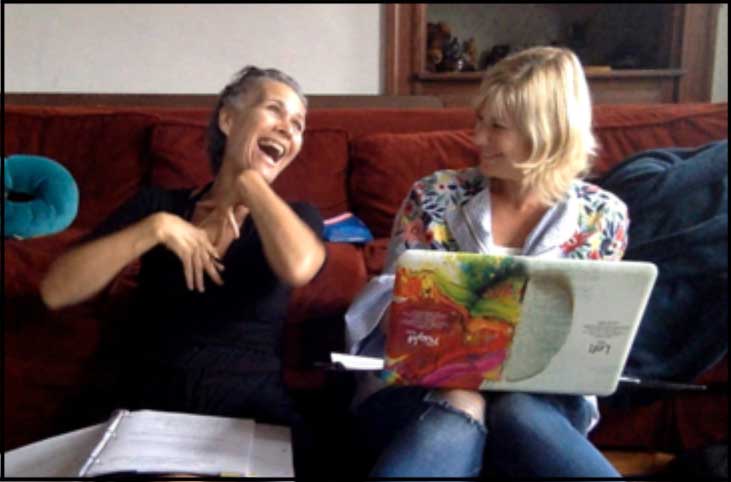 (ABOVE: I show Ute a very silly song that I cut from the original show) 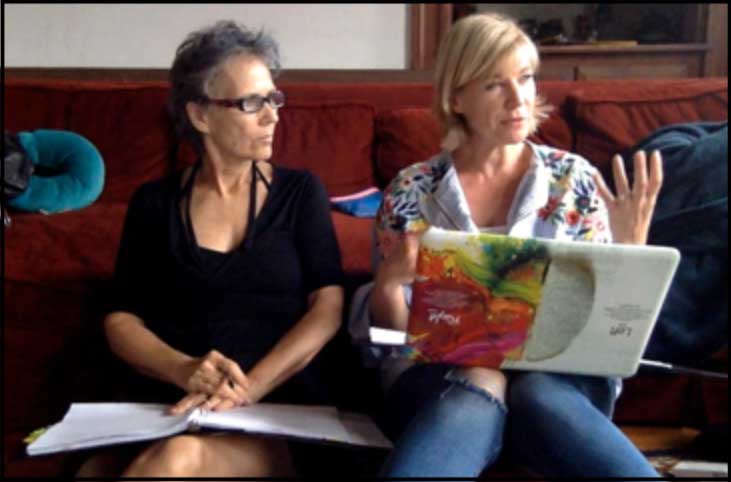 (ABOVE: Ute points out that there’s a serious side to the silly song that helps the script along) 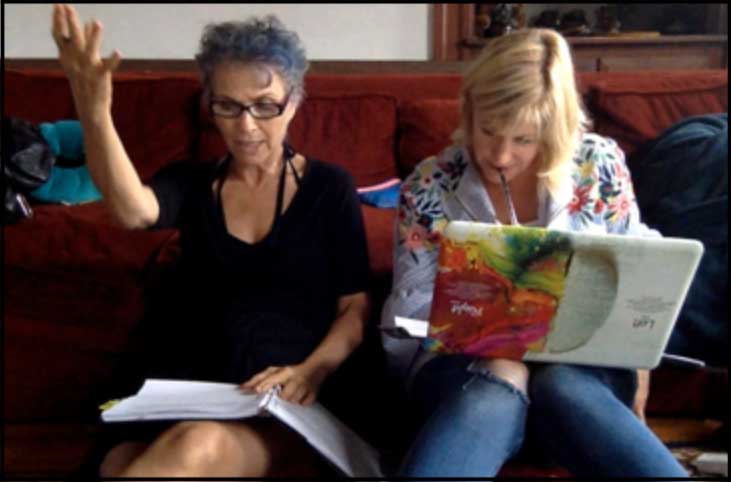 (ABOVE: We keep reading, trading parts between reading the character and the stage directions) 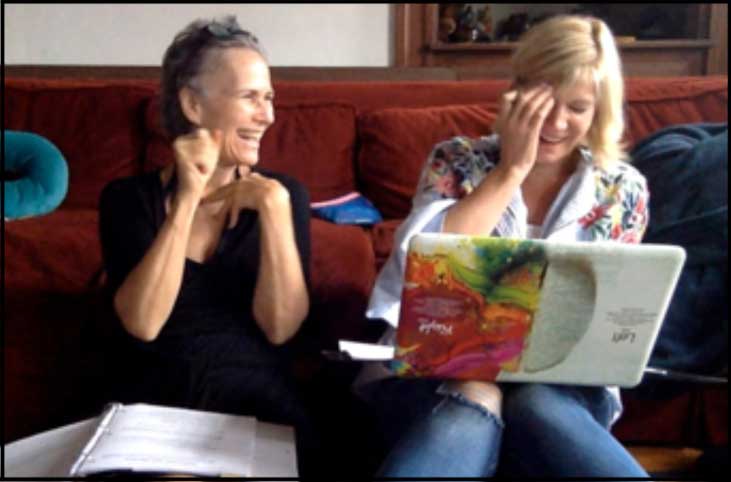 (ABOVE: We decide the silly song could really work if we set it up right)

When I first met singer/actress Ute Gfrerer, we knew within minutes that we wanted to work together – and once we sat down and talked, this was the story she was most drawn to do first.

Doing this show meant reviewing different versions of the script and playing through the music, and after a few months of creative back-and-forth, we finally settled on script version #31 (30 versions back from the current version #62).

So, stepping back 30 versions, and throwing out all the revisions that made it into a full-cast show,  we’re back to the basic One-Woman Show version.

Today was mostly about admin and housekeeping: setting up our online working space: using Dropbox to share the script, showing Ute my script versioning system, and how I use MSWord styles for script layout – and updating the old script so we can work on it.

Once we got through the tedium of updating the old script – and an excellent lunch Ute brought of homemade chili and squash – which was especially good since I haven’t had a chance to shop and my fridge is bare (Composing feeds my soul for sure – but if I forget to food-shop, my stockpile of sunflower seeds and frozen peas gets old fast) … we sat down and started a talk-through of the script.

I hadn’t looked through this version of the script for more than five years, so it’s like an old friend I haven’t seen in a long time.  It’s really a luxury to get to come back to a script after it’s sat on the shelf for a good long time, a luxury to get to see and hear it with very fresh ears.

There were some surprises – parts of the show I’d forgotten about, like a silly song I’d removed (but kept a note about in the script) because it didn’t fit my performance.  Turns out it could be perfect for Ute’s version of the show, though it didn’t work for my performance.

Since I originally wrote this one-woman-show for a harp-wearing devil’s-advocate (me) we’re dispensing with the harp, and keeping the bones of the show, but reinventing details of the story to fit a slightly new character, and editing songs to highlight Ute’s talents and sensibilities.  I love this kind of collaboration and the windows it opens to seeing my own work differently.

We’re shooting to have a version to workshop by spring 2018, so if you have a theater in the Boston area that’s perfect for one-person shows, let me know at info@hipharp.com.