To start at the beginning of this blog series: in a nutshell:  I was invited to compete on “America’s Got Talent” last March in Seattle, I played James Brown “I Feel Good,” was buzzed to rejection with lightning speed, and the show aired a few days ago.  The previous blog tells about how I prepared for the contest, which started as an adventure and a creative research project, but quickly became conflict-in-microcosm for a serious conflict playing out bigtime in my ‘real’  life. 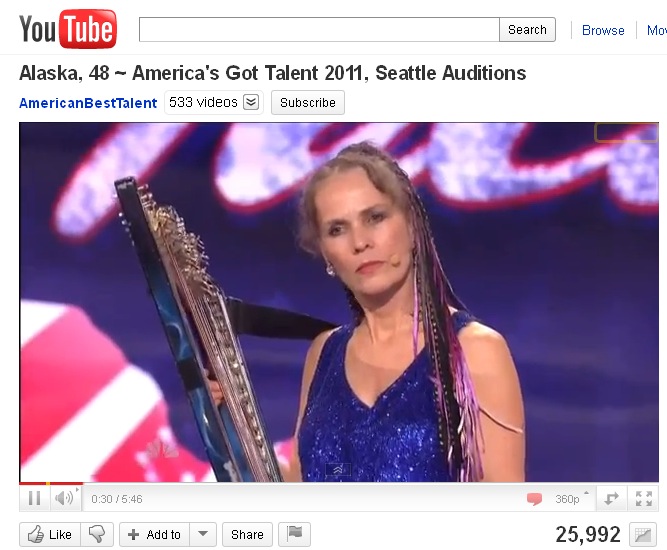 Listening to Howie Mandel lay in on the line for me

We lose ourselves and we find ourselves in the most unexpected ways.

By the time I walked onto the AGT stage, my 90-second performance of James Brown’s “I Feel Good” represented the entire struggle between buying the idea that who I am as an artist is fundamentally unmarketable — and believing that “sellable or not –  this is who I am and this is what I do.”

It hurts that I still struggle with that after years as an artist, and that I still find myself at times unable to stand up for the artist I am — notwithstanding the fact that I still can’t articulate what that is.  But this is why artists have managers in the first place: the greatest managers – like the greatest directors, or producers or teachers – fight fiercely to keep revealing who that artist really is, particularly to the artist — but also to the public.

Without that support, there’s a constant conflict between trying to maintain (while still discovering) ones’ individuality — and thinking that each glitzy new mold we could pour ourselves into might bring us ‘real’ success, not the fake kind we have.  Maybe other artists are more self-realized.  Me? I struggle with that every day.

But why play that conflict out on National TV?

If I was a more cosmic-type, I’d say that I needed that kind of floodlight to see it myself.

In any case, there I was, backstage at “America’s Got Talent,” deeply conflicted, unable to even verbalize the conflict to myself, and wearing blue-sequins.  By then, I’d totally committed to trying it my producer’s way – actually, I didn’t think I had a choice – I’d bought the idea that performing the way I actually perform was not only certain to fail — but was actually against the rules.  And I was only vaguely aware of my original purpose, which was to go through this as research for my musical.  I had totally bought in to the game.

So, I walked out on stage and launched into my James Brown routine, which started intentionally bland and underwhelming, and which would build over 90 seconds to a spectacular climax.

Only I never got beyond the first 10 seconds.  All 3 judges buzzed me almost simultaneously, which meant, that the power to my harp was also cut.   “Woah, that was fast,” I thought.

But it wasn’t over, because now the judges had the microphone.  “Well, first of all,” one of them said – and I can’t remember who — “first of all, you’re not a singer.”

“Right,” I said, wondering why anyone would think I was, not realizing that right there was a huge disconnect.

Then Howie Mandel leaned up to the mic. “You say,” he said, “that you want to show the world what this instrument can do.  But what you’re doing is just a gimmick.”

And the second he said that, all the chatter in my head stopped and the whole struggle became clear. Every bit of it, from the reason I was playing this piece to the way I was playing it.  “That’s it!!!” I thought. “That is the WORD! This approach IS a gimmick!!”

And the next second I was flooded with relief. “My god,” I thought “My god! I just got saved from a year of going down the wrong road!!!”

So I floated off the stage, and into a bank of cameras, with interviewers asking, “Is there anything you regret? What do you wish you’d done differently out there?”  And all I could think was, “‘America’s Got Talent’  just saved my life!!”

So anyone who thinks that I felt bad being rejected on National TV, has it completely wrong.  That moment was transcendent.

Later, when I started realizing how caught up I’d become in my own self-doubt, and that I’d still have to explain to my producer-friend that the Classic Rock Orchestra Harp show wasn’t really me;  and when I knew I’d be on national TV in a way that was less-than-impressive  – OK, that didn’t feel so great.  But the moment of revelation was exquisite.

I wanted to write about it.  I wanted to talk about it.  But of course, I couldn’t.  We all had to keep completely mum until the show aired, which was last week.

When it did air,  I kind of hoped my entire performance would be cut – but it wasn’t – there was still enough there to disappoint the people who love what I do — and it hurt to know that they were disappointed.   But now that it has aired, and I can finally write about the experience, it’s a huge relief.  And I realize that that moment of clarity, that was so strong when Howie Mandel laid it on the line, that clarity has blurred a little in the past months, and writing about it brings it back into focus.

So … as a research project for my ‘ultimate game show musical’ (see blog #1) my experience on “America’s Got Talent” went beyond my wildest hopes.  And in the next few blogs I’ll talk about the amazing, committed people I met on the show.

I also know now that this experience will become part of my own shows. But there won’t be any judges in that audience, just a whole lot of human beings who have all, at some point or other, opened themselves up to ridicule by reaching imperfectly for who they are.

And you know what I’m going to do?  You guessed it – pull out my harp and play my 90-second version of James Brown “I Feel Good.”

We lose ourselves and we find ourselves in the most unexpected ways.  And it does feel good.

Stay tuned for next AGT blog:  Standing in Stark Contrast (or whatever I end up calling it) – The Authenticity of Marylee Hause.