To start at the beginning of this blog series: you’ll know that I was invited to compete on”America’s Got Talent” last March in Seattle, I played James Brown “I Feel Good” on electric harp,  was rejected with lightning speed, and received a comment from one of the judges that completely rocked my world, solving a huge personal conflict and leaving me feeling utterly liberated.  But that personal revelation didn’t happen in a vacuum, and if not for one of the other contestants, it might not have happened at all: 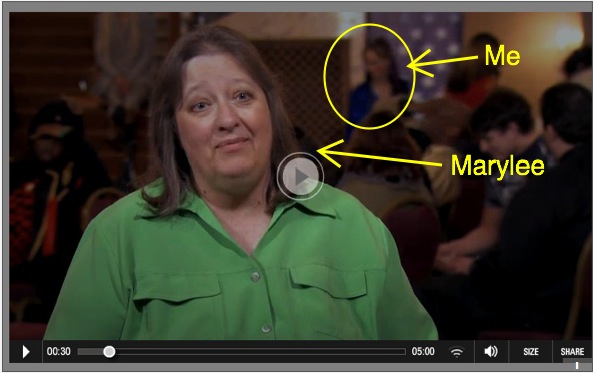 Marylee & me in the holding tank

The day before the taping, we — all the contestants — arrived from various cities to a single hotel in downtown Seattle.  On the day of the show, we met in the hotel lobby and were shuttled in vans to the Paramount Theater, where they directed us to a curtained-off corner of the theater lobby.  This was our ‘holding tank’ and it was filled with hotel function-room chairs jumbled into 20 or so different groups, each of which defined the territory of one act.  Some were only two or three chairs, some were big groups, circled together like Conestoga wagons, some were half-circles or just clumps.

Getting anywhere in the room meant tripping over costumes, instrument cases, food containers and other performers.  All the performers for our segment were there – and were all totally different:  a little kid was sitting nervously with her father, a Punk-haired magician checked his flight case, a transvestite stood in half-drag next to a rack of clothing whispering loudly to two assistants, a dozen or so men in tuxedos lounged on the steps of the descending staircase, a pair of acrobats was practicing on the stairway landing, a young girl lounged on the floor with her computer, talking aloud to herself and then typing, as if she were taking dictation from herself.

Everyone was preoccupied, and anxious and bored.

I walked around meeting people for an hour or so, and then went out to the bathroom and when I came back I saw a woman fanning herself on a folding chair at the foot of the staircase.  She had not  been there before. 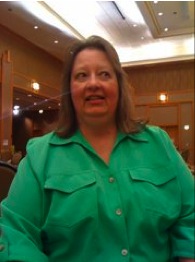 She was plump, looked to be about my age, seemed dazed, and was gazing around with an almost giddy smile.  Most everyone in the room was in some kind of costume, but this woman wore a plain lime-green blouse, black pants and no makeup.  She looked completely out-of-place and utterly inviting.

I thought, “Oh, there’s someone my age.” Like when I was a kid, and every summer we’d move to a different town (don’t ask why – I don’t really know) — but my job, while the movers carried boxes and furniture, was to go house-to-house, introduce myself and ask if there were other kids my age to play with.  I guess I still do that, so I introduced myself,  sat down next to her and we started talking.

She told me her name was Marylee Hause and her talent was writing songs for dead people.  She said the first song she wrote for a dead person was in high school, when a girl committed suicide in the bathroom.  Marylee found herself writing a song both about and almost in the voice of this girl, and the song helped her deal with the death.

After that, she said, life continued, she got married, became a real estate agent, continued to write songs, but secretly.  Then, the night that Michael Jackson died she had a dream that he came to her and told her to follow her passion.  (OK, I might be misremembering this part – I just looked at her website and that’s not exactly the story that’s there — but hopefully she’ll correct me if I’m wrong.)

That night, the night of the Michael Jackson dream, she realized she had a gift, and she had to dedicate her life to it.  So she started a business writing songs for dead people – songs to give a voice to people who no longer have one – and to give the people left behind a sense of comfort and connection.

She sang me one of the songs she’d written and I – honestly – gasped.  This person she was singing about – and I mean just singing acapella in the middle of this crowded room — this person came alive for me in the time it took for Marylee to sing the song.  I suddenly remembered a girl who had committed suicide in my own school — and the song gave me a sense of that she had been a real person, instead of just a ‘suicide.’   I thought, “This woman could be writing musical theater!”  Her talent seemed effortless, sincere and surprisingly effective.

When she heard I wasn’t going to perform my own original material, she was very upset.   It just didn’t make sense to her.  Why would a person who has their own voice, compete in a voice that really isn’t them??

Good question.   But if you’ve read the previous blogs, you’ll know why …

So for the AGT audition, Marylee had composed a song as if judge Piers Morgan was dead.  “How brilliant is that!” I thought.

I asked what she was going to wear and she said these clothes were all she had, and she didn’t normally wear makeup. So I offered to put some makeup on her, “Not to change you,” I said, “Just to make it easier to see where your features are.” (This is my personal makeup theory, nothing specific to Marylee).

When it was time to go on, she and I were brought backstage at about the same time, since she’d be performing shortly before me.  By then we were friends, and I was excited I could watch her performance on the backstage monitor while I stretched out.  Well, excited and nervous.

So I actually saw Marylee walk out on stage – which was unusual because most of the time the performers were basically sequestered in the holding tank. She talked with the judges — I swear –  like she was their next-door neighbor.  Then she sat down to play the piano and sing her Piers Morgan post-mortem tribute.   As she sang, a video with excerpts from his life played on a screen over her head.  It was totally sincere, funny, personal, compelling — like a tribute to a man she seemed to know and love, and which — from what I could tell — she’d written in the last week or so specifically for this audition.

You could see Piers morph from almost offended to deeply moved, and you could feel the audience completely taken by Marylee’s sincerity.  And when she was done playing, the audience leaped to their feet, screaming, cheering, and Piers Morgan did, too.  (You can see it all here on Marylee’s website IWriteSongsForDeadPeople.com.

And as I stood there watching on that tiny monitor backstage, I thought, “Please … do not … make me go next.  How could anybody follow that level of ‘real?'”  This woman had a personal relationship with each judge, with the show, with Michael Jackson and with the dead people she writes songs about.  And that personal relationship was completely her choice – she’d never met any of them.

And she’d only performed in front of people once before in her life (a troupe of Boy Scouts, I think, the weekend before the show). She just went out and did what was most important to her, and the audience fell completely in love with her.

Was she a polished performer?  No!  Was she a young, svelte beauty?  No!  Had she practiced this over and over ’til it was flawless? NO! Was she a real person with a huge talent capable of inspiring and moving an audience?? Absolutely, totally, completely yes.  But only because she was truly being herself.

Which was the one thing I was having trouble doing.

When Marylee’s “Critique Session” started, the judges argued back and forth, not about her talent, but about whether they liked hearing songs about Piers Morgan or not.  In the end they voted “No.” Not “No, Marylee isn’t talented,” but “No, we don’t want to hear another song about Piers Morgan.”  I wanted to race onstage yelling. “No! No! You don’t get it!  The next song will be about YOU!  And you DO want to hear it!!!”

But they didn’t.   She was rejected and she walked off.

Fifteen minutes later I walked on stage and you can read what happened in the previous blogs.  I was buzzed, and the judge’s comments hit me like a revelation and resolved a huge personal conflict about my own authenticity.  But if I hadn’t seen Marylee Hause, Howie Mandel’s comment about my playing would never have had the profound effect it did on me.  In the space of fifteen minutes I got to see a raw talent being true to herself — and professional making bad choices based on fear.

And there was no contest.

In the end, we both were buzzed.  But what that audience saw of Marylee was truly who she is, and what they saw of me was a brief, awkward model of who I thought I should be.  But because of her, I could see the difference, and that’s what I needed.

Later, Marylee and I sat in the hotel restaurant, she very glum with her rejection and me elated by what I’d learned from mine.  I tried to tell her how her authenticity helped me see where I’d gotten lost, but we were both in that zone where it’s hard to see outside your own experience.

I swear I have many times since then thought:  “OK, wait, she’s really a successful songwriter, who’s doing this incognito, right?”  Or, “Oh, I get, it, AGT made up this person and asked an amazing actress to impersonate her on the show …” That’s how unreal it is to see someone so completely real.

As I write this, I have a twinge of anxiety – that maybe she didn’t come across on TV the way she did in person, that the editing might have undermined and diffused what everyone there experienced live — and that someone might question my judgement about her. But frankly, it’s not about judgement.  Life ISN’T a talent contest and we’re NOT celebrity judges.  We fall in love with someone or we don’t, because they speak to our spirits through their art or they don’t.  That entire audience, me included, fell in love with Marylee Hause.   And the person they fell in love with is really who she is.

We were both rejected, and we both went down, but Marylee went down as herself —  and I saw that  if you do go down for who you really are,  you’re still shining the whole the way.  And that’s a light that people can see you by.

Marylee … Thank you.  You can pretend I’m dead any day.

(You can watch the video of Marylee at her own website or on the ‘official’ AGT Video site.  I don’t know how long they’ll stay on line, so apologies if they’ve been removed) 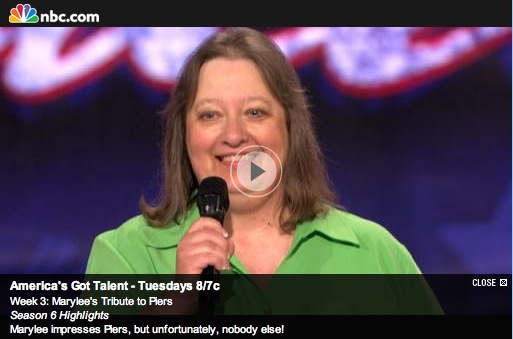 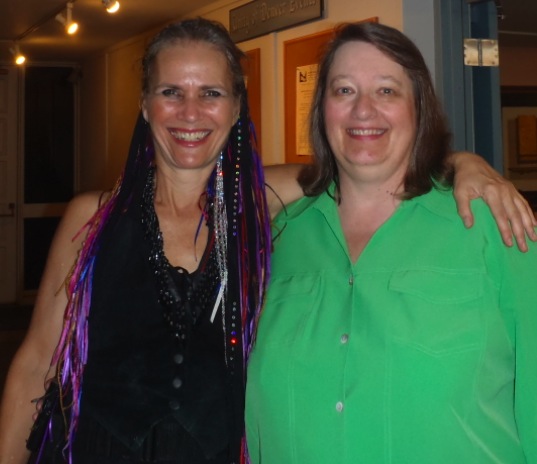 Deborah & Marylee after the concert in Denver 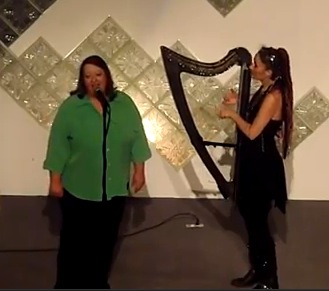