My neighbor, Betsy, recently sent out a neighborhood bulletin asking for “occupational clothing.” Betsy’s teaching a course called “Social Change in Action” at Boston College and the clothing was part of the students’ field work. 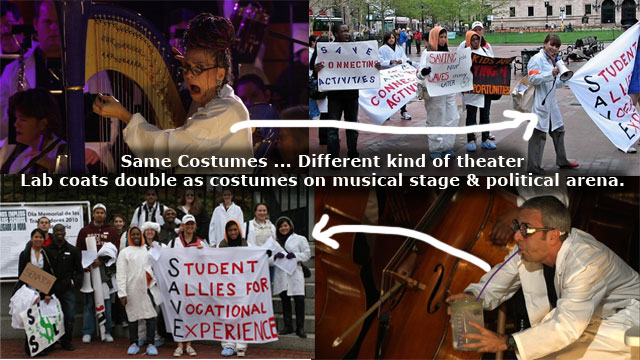 I just happened to have 20 lab coats left over from the filming of my DVD “Invention & Alchemy” so Betsy took them for their next theatrical mission – this time Guerrilla theater.

This week, Betsy sent me photos of the lab coats with this note proving, once again, that dressing for success may look different … or oddly similar … in different circumstances:

The group of 17 Boston College students in a Social Change in Action course, calling themselves Student Allies for Vocational Experience (SAVE), set a goal of reversing last year’s $4 million state budget cut in two career internship programs for low-income high school students. They marched on the State House, where they did street theater, wearing borrowed occupational costumes including the infamous “Invention & Alchemy” lab coats, lobbied every senator and delivered petition signatures. The Senate Ways and Means actually put in a small increase ($100K) in its proposed budget for one of the programs, even though they cut or level-funded most programs due to the budget crisis. Not a big increase, but the House budget proposal cuts the programs even more, and that’s what we expected from the Senate too, so even level-funding is a victory.

And I do think their sincere pleading may have won the $100,000 increase. I promised them extra credit for the course if they won any increase, so everyone’s grade was bumped up one notch when the Senate W&M budget came out on Wednesday.   I’ll return the lab coats next week. Thanks! — Betsy.”

I wonder what the lab coats’ next mission will be.