How do you get to Carnegie Hall – with a checklist?

OK, it’s not exactly Carnegie Hall – it’s the Pantages Theater in Tacoma, WA – and I’ll be there April 22  — but it’s the only joke I ever heard my grandmother tell, and I’m pretty sure she meant it as a lesson and not a joke:

A tourist, lost in New York City, stops a distinguished older man who’s walking down the street with a violin case.  The tourist says, “How do you get to Carnegie Hall?” and the violinist looks him, sighs and says (with a Yiddish accent –  according to my grandmother’s telling) “Practice, Practice, Practice.”

As a composer/performer who writes my own music for symphony orchestra, it turns out that it takes a lot more than practice to get to a concert like the Earth Day concert I’m playing April 22, 2018 with Symphony Tacoma in Washington State called “Earth Songs from the Harp” (Learn more and get tix here).

This is where we’re headed: 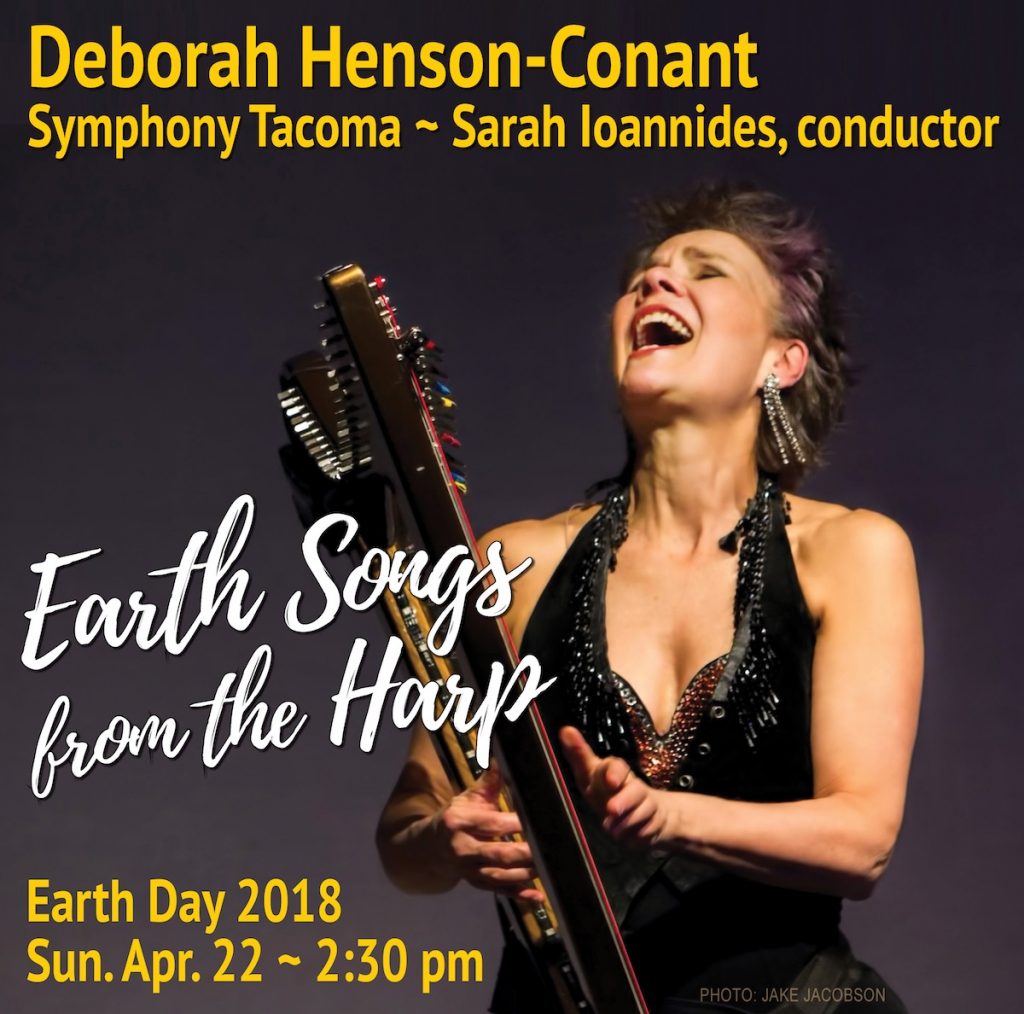 But this is where it STARTS: 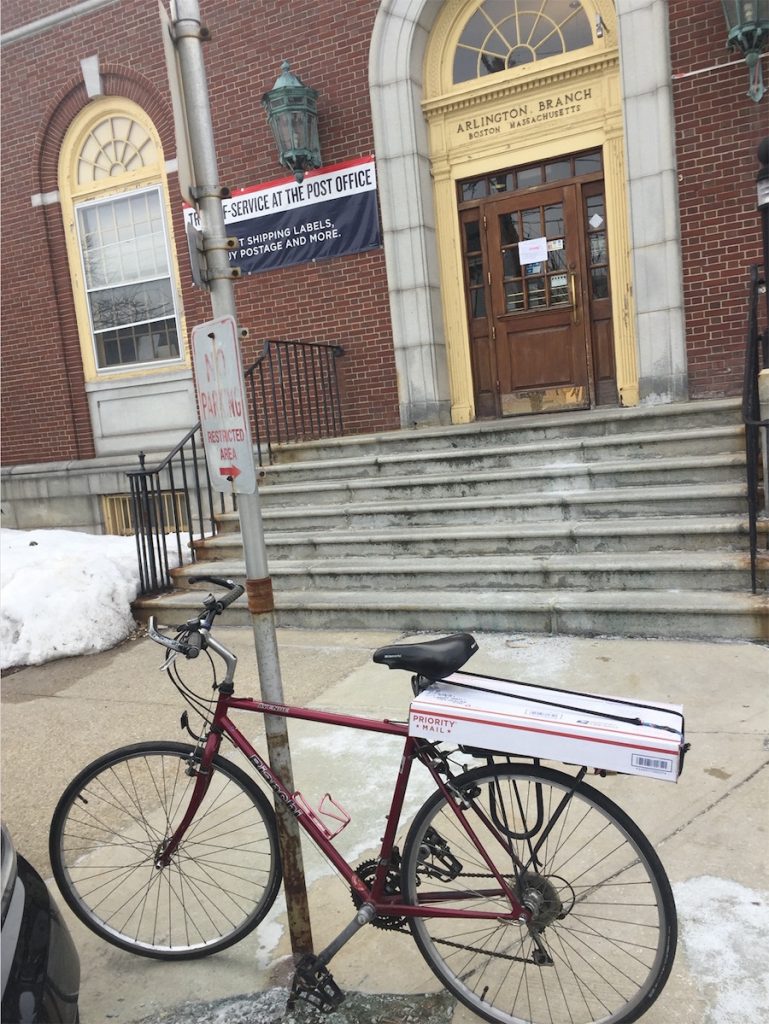 OK … OK, actually this is where it starts:

(I just didn’t want to show you this picture, but my assistant said it’s not going to ruin my life if I let you see it.) 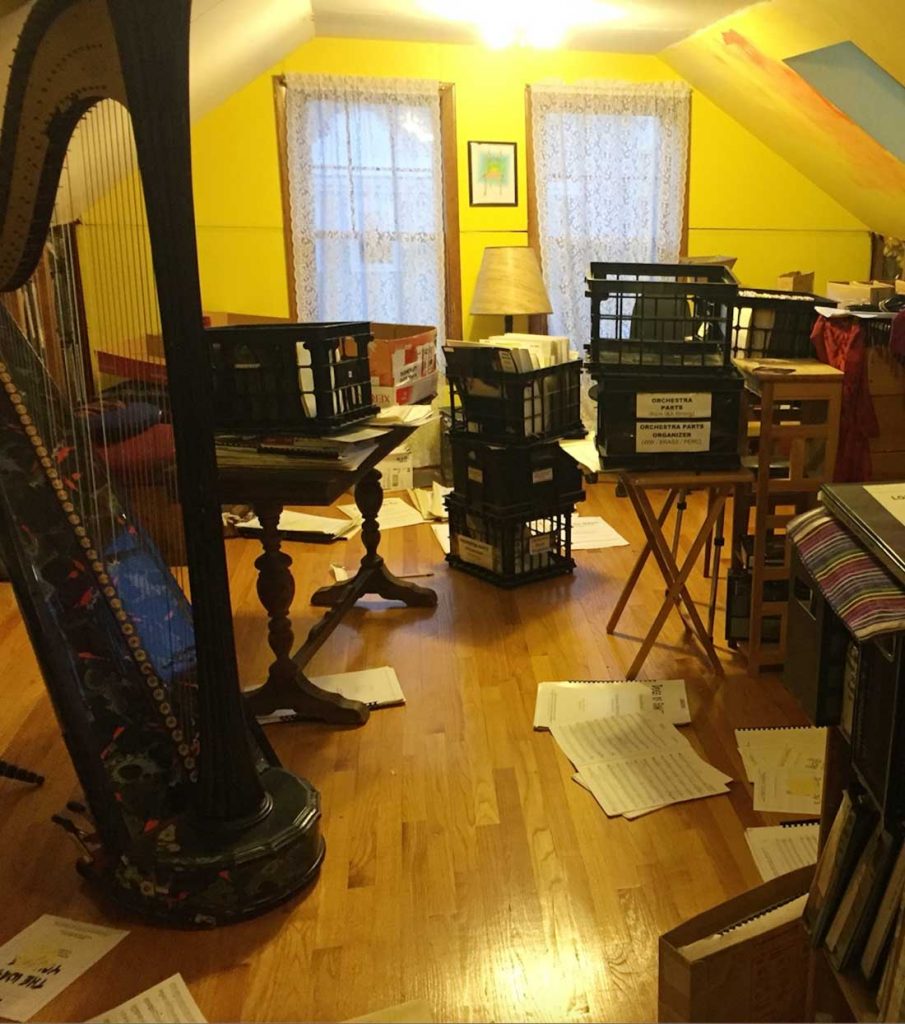 So let me put this into context…

When I play as a symphony soloist, I don’t just arrive with my instrument case and play, I bring all the music – including every note every player blows, bows or beats — and even though I’ve written every note and played it with many symphonies, preparing the materials, making sure every player gets the right part, means a lot of organization on my end and coordination with the Music Librarian on the Symphony’s end.

When I play as a symphony soloist, I don’t just arrive with my instrument case & play, I bring all the music - every note every player blows, bows or beats. Click To Tweet

The first time was easy

OK, the first time wasn’t all that easy – but that’s another story.  What was easy, was that in my debut performance with the Boston Pops nearly 20 years ago, we finished printing the music just before the first rehearsal, everything was fresh and I was only playing 3 pieces.  Once the parts were printed, we literally got in a cab, jumped out at the concert hall, put them on the musicians’ music stands and the rehearsal started – and I vowed to never cut things remotely that close again.

“We” was me, my assistant and the two men who were helping me learn how to do it: composer Kevin Kaska and copying Ray Tarantola – yes, it took all 4 of us.

Since then I’ve written dozens of pieces that I play with orchestra – and they always arrive in the orchestra’s Library minimum two weeks before the first rehearsal.  These parts and scores have flown all over the world, where they get played and then sent back to my studio just outside of Boston.

These parts & scores have flown all over the world, where they get played, then sent back to my studio just outside of Boston. Click To Tweet

Making sure I get everything back, making sure it all gets organized to go back out to the next orchestra — that’s the challenge now.  And when I take a few years off – like I just did to build my online school and mentorship program – the systems need to be re-established and double-checked.

And if you want to support that achievement, you need consistency and thoroughness, and for that you need checklists and systems.  At least, I do.  Otherwise I’ll do everything a completely different way each time.

Yeah, this is the seamy underbelly of creative endeavor, folks – the part nobody wants to admit. Organization can seem like the antithesis of creativity — but my systems and checklists are what  I’m revealing to you today – and they are what support my creative expression.

Of course, if I had a life-long alter-ego who managed everything in my life, including every edit and update, then I could sit back, let that person do all the management and organization –  and just play the role of a ‘soloist.’ But that’s not my reality and I suspect it’s not the reality of any composing-performer, because no matter what you put down on the page, when you play it in rehearsal and performance, the playing reveals more of the piece – and that changes what goes on the paper.

Until you die, the music is evolving.  After that, hopefully the evolution continues with the people who play it.

So, for better or worse, my life has always been hands-on — a combination of ever-expanding creative thinking supported by checklists and systems. It doesn’t mean it don’t have help, or that my assistants aren’t careful or great – they are! But ultimately I’m the one who knows the music and how it all fits together – and I”m the one who’ll be standing there with my harp in the first rehearsal, sweating bullets that nobody was given the wrong part.

So no matter who’s helping me organize this, and no matter how great they are,  I have to create the system my assistants are going to follow, and I have to keep monitoring it to make sure it’s still working.

So here’s a bit of what’s on the BACK end of an exciting symphony performance:

Checklists that help us make sure every player gets every part for every piece … and so the Music Librarian can check them in on the other end, and we can check them back in to our library on this after the concert. 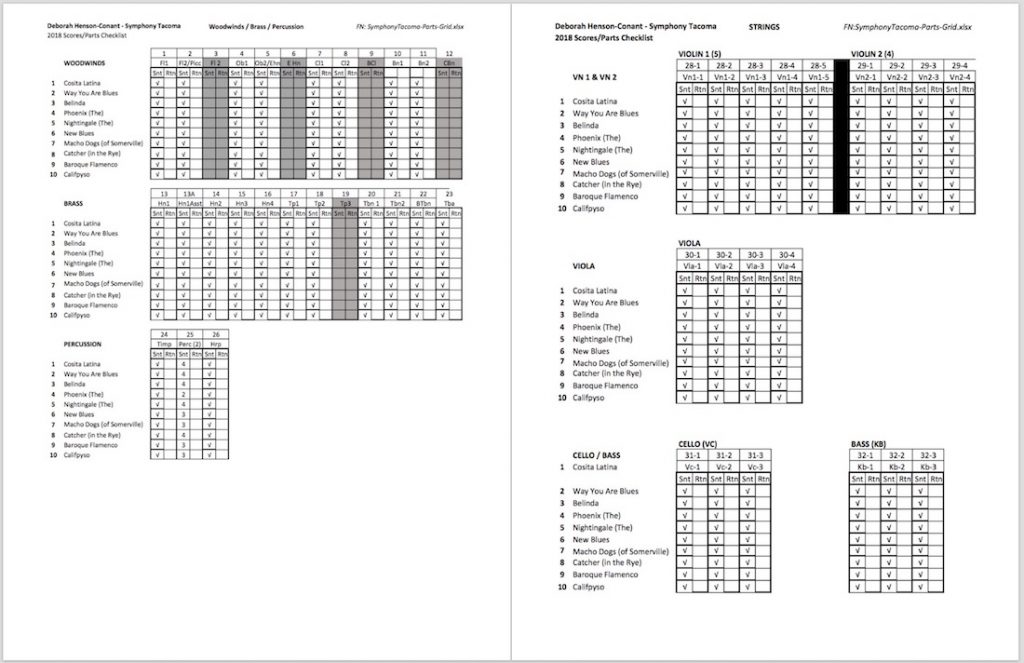 Boxes that help my assistant organize all the parts together before I put them into the folders to send to the Music Librarian on the other end: 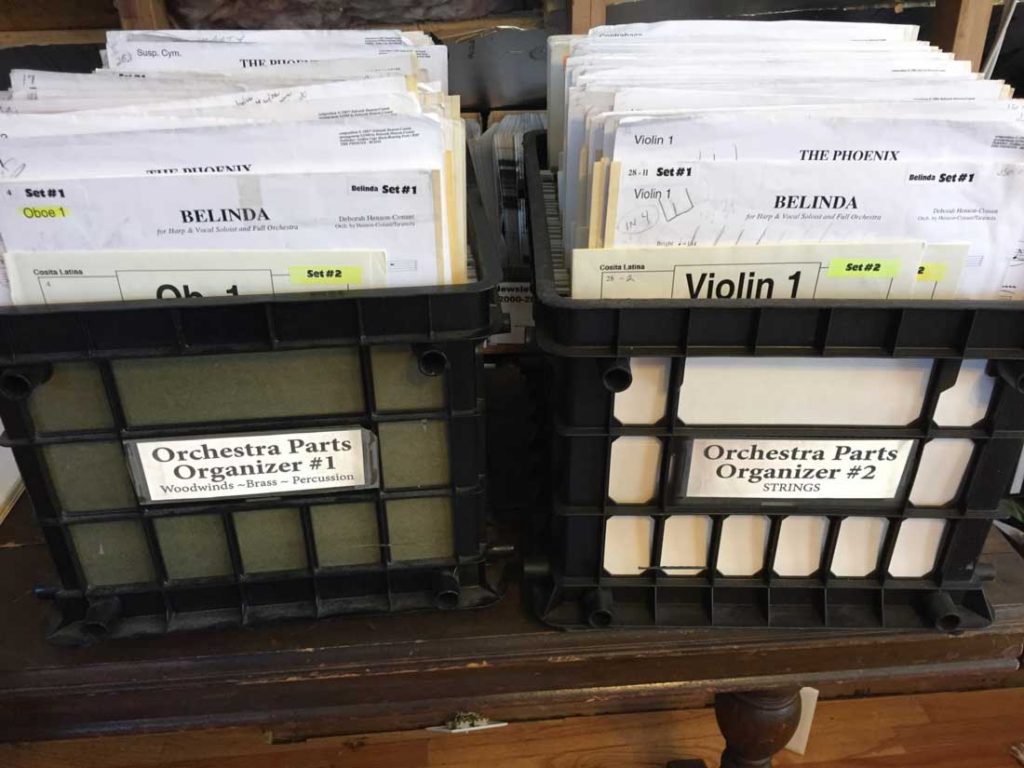 Below is what the boxes look like empty.  There’s a hanging folder for every single player in the orchestra, and all their music gets put in order when we check the parts in and check them back out for the next show. 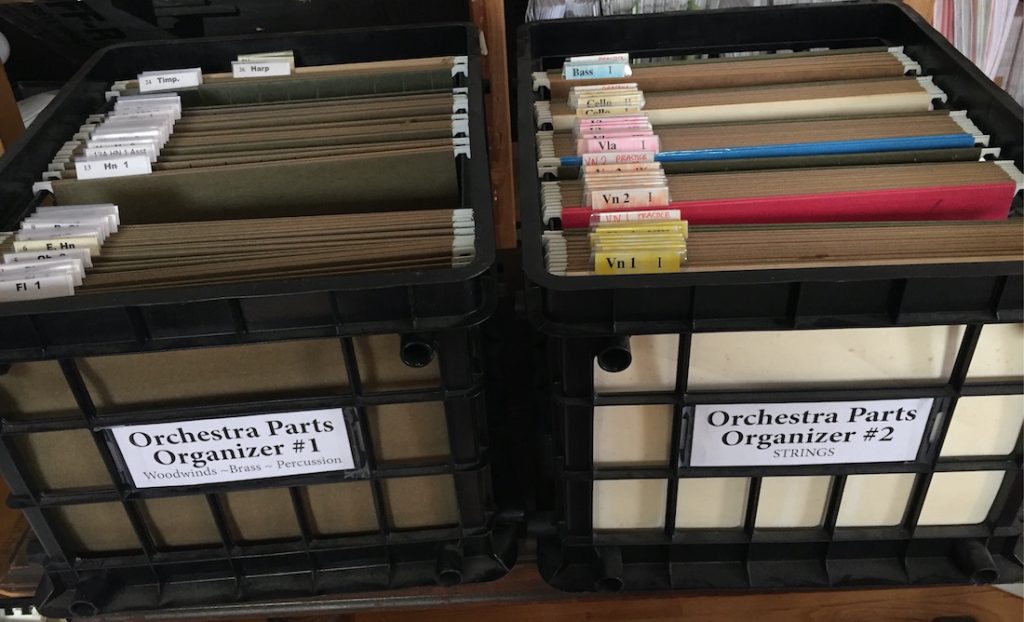 Insured, weatherized, trackable packaging is essential.  In fact, all the parts for my April 22 show with Symphony Tacoma took 5 of these boxes to send, about 60 pounds of music, total – this was just the final box, that I was able to bike down to the Post Office. Inside the box, all the music you saw above was put into folders – one folder for each player – and that was all put into a weatherized protective sheath – otherwise known as a large garbage-bag.  You never know what the weather will be like on this end – or the other. 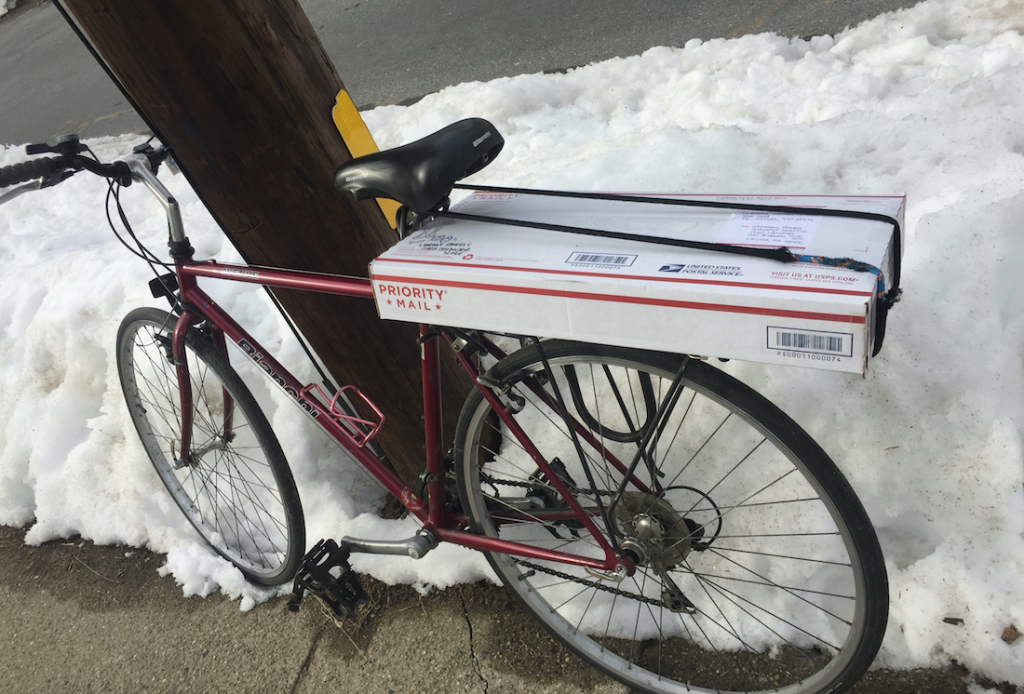 My local post office was excited that I can now use their cool new flat rate “Gaming” boxes to send the music, which are trackable, 2-day packs – and, if you insure them for $501 or more, they require a signature (so they’re not just left on the street somewhere).  In fact, I insure them for more, because recreating the contents of these boxes would cost thousands of dollars — even though it’s just paper.  But these original parts include markings from the players that will be invaluable in editing these scores for publication. 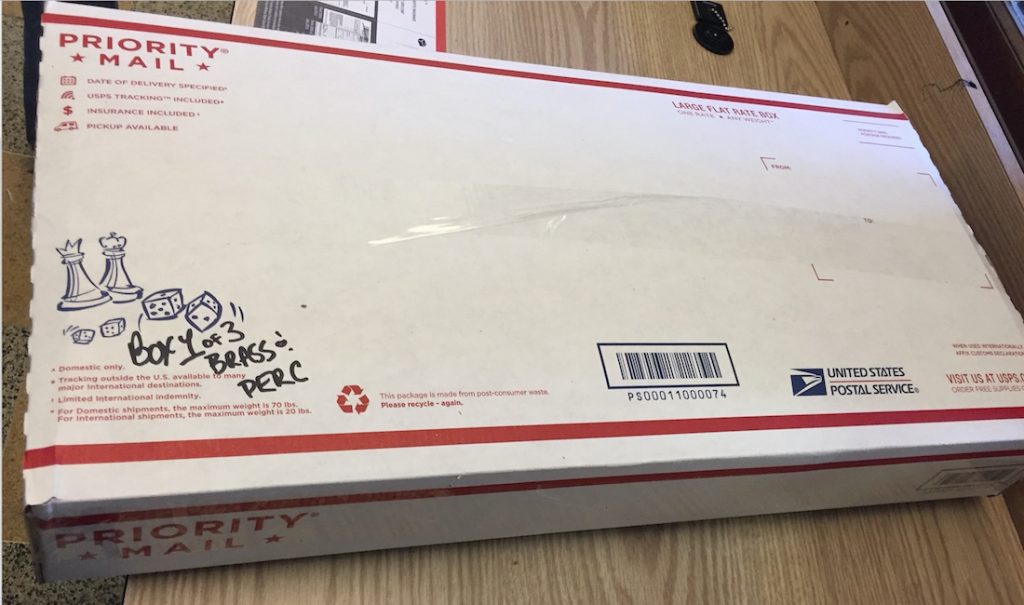 While there’s a lot more too it than that,  these basic systems and tools help me make sure that the years of creative work I’ve put into composing all this music ends up in concerts where thousands of people can hear and enjoy it.

So … how do you get to Carnegie Hall as a composing/performer?

Well, if you want to do it more than once, use checklists and systems.

How do you get to Carnegie Hall as a composing/performer? If you want to do it more than once, use checklists & systems. Click To Tweet

Come see it on the other end – when the concert starts!

Come to the show when I play “Earth Songs from the Harp” with Symphony Tacoma, and conductor Sarah Ionnaides on Sun. Apr. 22, 2018. 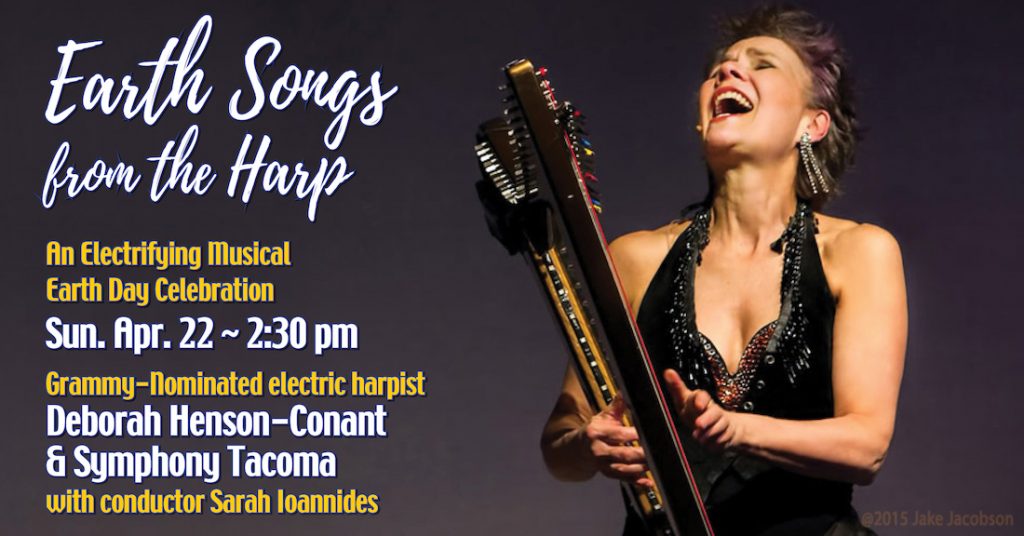