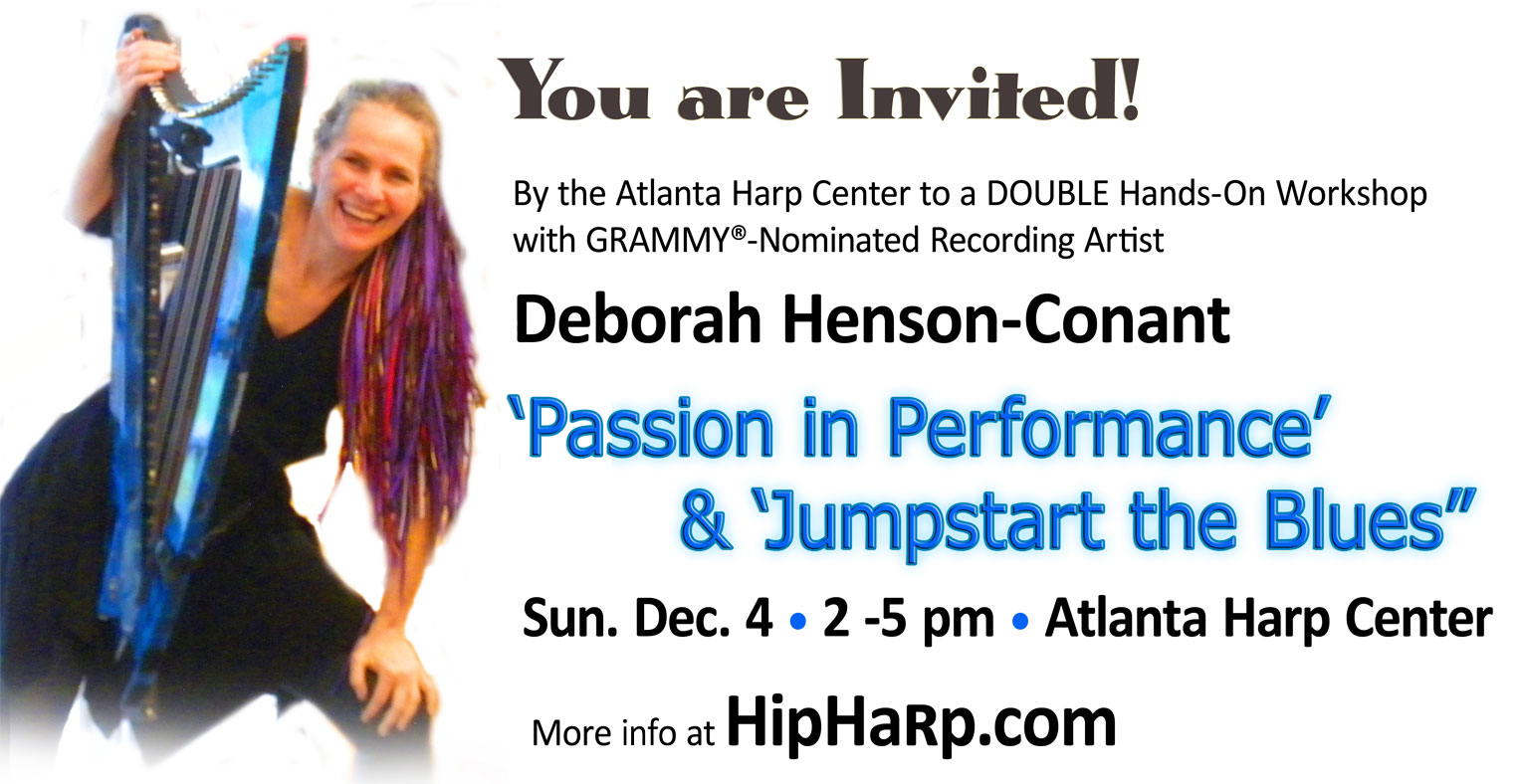 Deborah Henson-Conant is a GRAMMY®-Nominated recording artist, and the world’s foremost electric harpist, known for her Blues, Flamenco and a performance style that ranges from fiery to intimate.   She’s debuted with the Boston Pops, soloed at the Kennedy Center, opened for Ray Charles at Tanglewood, and appeared on NBC’s “Today” show. She’s won grants from the NEA and “Meet the Composer”, and starred in her own music special on PBS.  She’s been so crucial in the development of the electric lever harp that the newest CAMAC model is named after her, the “DHC Light.”

But did you know she started harp as an adult, studied classical music, was signed to one of the top jazz labels in the country and then spent the last 15 years creating her own genre of performance?

Talk about reinvention! Her summer performance workshop in Maine attracts harpists from all over the world, from beginners to professionals — and she’s passionate about teaching and sharing her love of performance with artists and students of all levels.

On Sunday, December 4th, she’s collaborating with the Atlanta Harp Center on a double-workshop from 2-5 pm that combines a jumpstart in the Blues with the art of creating passion in your performance.

Do people ever ask you if you can “play something fun”? Do you wish you could rock the house / move them to tears / bring ’em to their knees?

Whatever level you are, you’ll walk away from this workshop playing the Blues — a musical style embraced by everyone from beginners to professionals both for its simplicity and its infinite possibilities for self-expression.  We’ll harness its simple underlying form,  learn some cool riffs and explore how this musical playground – which is fun even in its simplest form –  can be developed over a lifetime to accompany your own voice, develop a soulful instrumental solo or be a ‘common language’ to play with other musicians.  PLUS, you’ll get a sneak peak at Deborah’s new “Blues by the Dozen” Project.

After this workshop, when they say “Take it away!” you’ll be able to!

If you “know you’ve got it in you” but you just don’t know how to get it out, then performance skills can set you free — whether you’re stuck artistically … or don’t even know where to start!  Many people just like you – from adult beginners to  lifelong professionals – don’t realize they can instantly improve any performance without learning a single new note — simply by putting themselves more into their playing, and by performing with a greater personal connection.  You can take everything you learn in this session and apply it to every single note of every piece you play — and then beyond your instrument to the art of performing your life with passion.

Session 2 runs from 3:30 – 5pm and is followed by a short reception with Deborah.

What Deborah says about this double workshop:

I wanted to combine these workshops because the Blues is such a great musical gem to have in your creative jewel-box — but it’s also a perfect example of music that’s simple to learn, but that can be utterly transformed by how you perform it, whether you’re a beginner or a professional.

I also love basic musical ‘ideas’ that allow people of different technical levels to play together, or give people a ‘structure’ that’s fun in its simplest form but can be developed over a lifetime. I collect these musical ideas, and Blues is one of my favorites.

The art of performance is one of my lifelong passions and I’ve studied it in many intensive situations, from working with one of the world’s most innovative mimes and immersing myself in a month-long Shakespeare intensive, to working one-on-one with theatrical directors on my own one-woman shows.

I’ve learned that performance isn’t about the challenge of learning to more and more technically difficult pieces–  but about the challenge of playing exactly what you’re already playing with complete commitment, emotional resonance and personal expression.  The true art of performance removes any sense of competition or inability and focuses directly on your own deepest personal connection with the music you play. Some of the most moving performances I’ve ever seen have been by students in my workshop who suddenly ‘connect’ with their own expression, regardless of technical level.

How we perform music directly connects who we are as musicians to who we are as human beings – and teaches us be more deeply and authentically ourselves in everyday life. It brings the illumination of music into the art of being alive.  I’m thrilled to be sharing these two workshops with you in collaboration with the Atlanta Harp Center! (Deborah Henson-Conant – Nov. 2011)

Call or email the Atlanta Harp Center to register  770-619-2920  info@atlantaharpcenter.com
Harps will be provided and brief reception with the artist will follow.  Workshop price, including handout materials.  $79