Notes (and Doodles) from a Mark O’Connor Music Lecture

A week ago, I had the chance to spend an “Up Close and Personal” evening with legendary composer, fiddler and educator Mark O’Connor.  It wasn’t a date – it was a last-minute lecture sponsored by the GRAMMY® folks held at Berklee College of Music in Boston.

Getting there was tough.  I’m wildly jealous of Mark (like I am of pretty much everyone I’m fascinated with who’s alive … and some who are dead … also some who are imaginary).

So my fascinated-self had to drag my sulkily-jealous-self over to Berklee, where I joined an intimate group of Berklee students in a small classroom where Mark showed us pictures from his past and talked about his career, his passion and his future plans.

He had a lot to say, and I took notes. If you don’t want to decipher my handwritten version I’ve outlined my notes below, including a key to the drawings on the page. 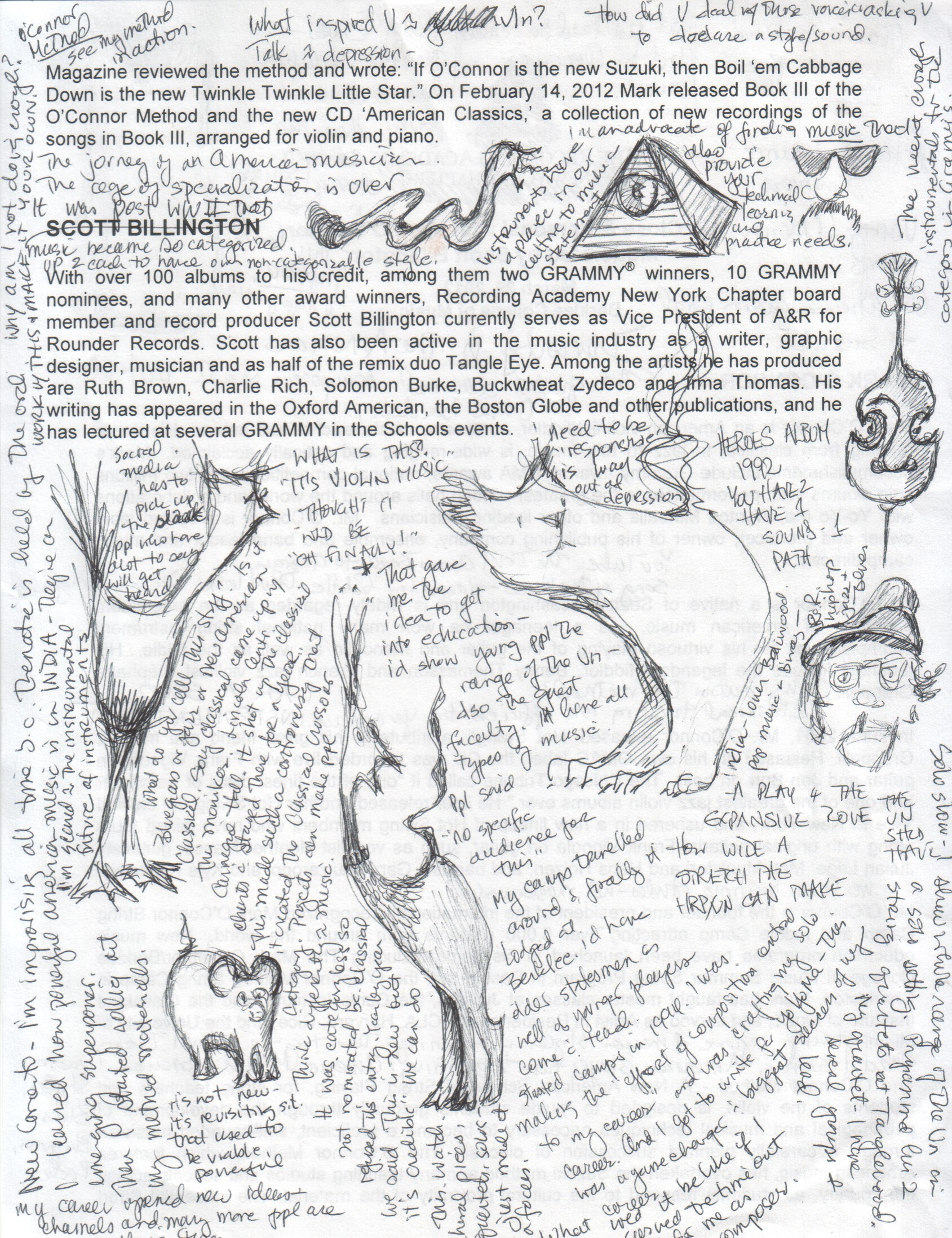 My notes from Mark O'Connor's Lecture at Berklee

A Key to the Drawings

My notes were on the back of the program.  O’Connor’s bio took up the front (hardly enough space to even draw a cat).  Scott Billington was the moderator (thus his bio on the back).  It looks like I crossed out his name — but I didn’t — that’s a “this sentence is continued down here” line.

The presentation started a few minutes late — which is how the cat, the ostrich-thingy and the avian-rhebok got there.  I don’t remember how the snake appeared.  But the pyramid-with-an-eye is important.  I’d just finished drawing it, during the opening slideshow — when when O’Connor appeared in a picture in front of a pyramid.  As that was a possible-psychic-experience, I drew a nose-mustache-and-sunglasses to see if O’Connor would soon appear in the slideshow with them … but he didn’t.

The pig was not a value judgement, but I don’t know what it was.  The fiddle is self-explanatory, also the portrait of O’Connor, though it probably won’t help you find him in a train station.

Two of my favorite things about the lecture – in addition to that great amorphous sense of expanded awareness you get at a good lecture — were these:

Mark, like me, has worked to explore his instrument rather than a specific genre of music. When you approach music that way it means, in many ways, that the richer your exploration, the less you fit the categories of the music business.

So when Mark released his first top-selling album (which I … er … forgot the name of), even though it outsold every classical album released that year, it couldn’t even be nominated for a GRAMMY® because there WAS no category in the GRAMMYS®  where it could fit!

The “Classical Crossover” category was created the next year in response to that dilemma. My own GRAMMY nomination was in that very category. So without Mark’s trailblazing, I wouldn’t be a GRAMMY®-Nominated artist.  Thank you, Mr. O’Connor!

Mark is well-known to listeners like me as a player.  But as an educator, he’s been quietly creating “O’Connor Method” summer camps for string players and he’s developed a new method of teaching strings (violins, violas, cellos, basses) that’s based on using American music – like folk songs and fiddle tunes — as the basic building-blocks of learning technique, rather than using European folk and classical music, or simplistic exercises.

Here’s a cool 2009 article that’ll hopefully make his educational concepts clearer than I can: http://www.violinist.com/blog/laurie/200911/10653/

Other things I learned

Some of my favorite points (which Mark may or may not have made – they may have just occurred to me or I wrote down what he said incorrectly – so if you meet Mark and he says he said nothing about these, you can believe him):

While I was only one of 2 people at the lecture who was over 30 (the rest were Berklee students), I learned via accidental-audience-polling that THREE out of the audience of 30-40 people were harp players – a whopping 7-10%!!  So a note to everyone else: watch out — our numbers are increasing!